The Chicago Bears Lose Again to New England, Looking to Ground the N.Y. Jets in Week 8

There was a weird feel to Sunday’s Chicago Bears game versus the New England Patriots. The Bears looked lackadaisical. Chicago played somewhat poorly, yet almost beat the defending AFC Champion Patriots. New England won 38-31. It was almost……boring . Am I out of line here? Did I see this game differently than others? It was strange, right?

Maybe it was the unique CBS telecast and sportscasters rather than our usual Fox network broadcast. Maybe it was the Soldier Field crowd that seemed half-asleep. Did you feel it too? Maybe the Bears fans were either spoiled in thinking we have a great team already and should easily defeat the Patriots, or they were expecting the worst and therefore sat on their hands. Either way, they were quiet and didn’t do enough to bring the energy that our team needed to defeat this vaunted New England squad. The fans seemed quiet, uncaring, and in essence, sleepy.

Nonetheless, Chicago (3-3) fell back into a tie for last place in the NFC North (Norris) Division. Not to worry. This team is doing just fine. Would it have been nice to win? Sure. Was it a necessity? No way. The progress is fun to watch. It’s happened very quickly this year after years of slow progress under the last two head coaches. Who are we kidding? Coach Trestman led this team to the bottom of the barrel with help from the front office and Coach Lovie Smith who tried to gather/hold-on-to the oldest group of players in the NFL. Then Coach Fox couldn’t do much with a super young, always-injured team that wasn’t a serious threat for victories. However, I maintain that Coach Fox did do many positive things regarding defensive scheme, team toughness, and development. If and when this team returns to the NFC Playoffs, I believe Coach Fox should be given at least a sliver of credit. But that’s all big picture stuff for another day. For now, let’s award some Game Balls for this game.

QB #10 Mitch Trubisky – Trubisky wasn’t fantastic against New England but he was pretty darn good for a young QB in just his 2nd season. Mitch is really starting to progress each and every week. In this game he put up over 400 total yards! Trubisky completed only 26 of 50 passes for 333 yards with 2 TD’s and 2 INT’s. Notably, Tru rushed 6 times for 81 yards and 1 TD. That’s a heavy game with plenty of chances. His mobility and escapability is truly a weapon. This system is predicated on the QB and as you can see, it’s progressing nicely and working excellently already.

TE #80 Trey Burton – Trey Burton was one of the biggest free agent signings by Pace this past offseason. So far, so great! Burton was targeted 11 times by QB #10 Mitch Trubisky and caught 9 passes for 126 yards and 1 TD. Through one-third of the season (6 of 18 games), Burton has caught 24 passes for 325 yards and 4 TD’s. Multiply those numbers by three and you’ll get some huge numbers for a Tight End. 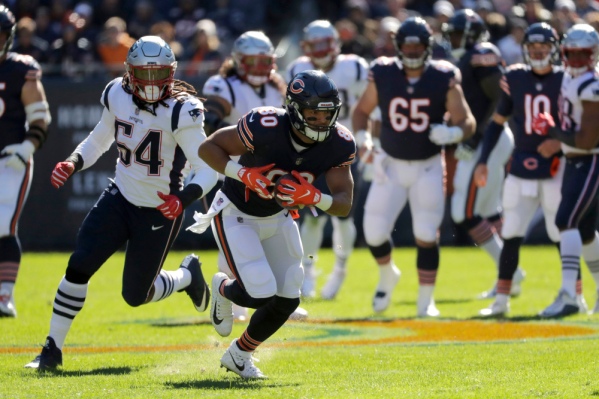 “New England is favored by 3 points. “Dutch Lion” is torn on this prediction. We might need to go to a psychic or something this week. Maybe Jimmy “The Greek”, Pat Sheridan, or Phil Steele. Maybe a Morty Olshan or one of the great handicappers of our times. We could give Gary “The Gut” Goombah a call. How about “phoning a friend?” Let’s try it. My buddy Simon texted me a pick. He wrote simply, “Bears”. Thanks buddy! I’ll take it. Bears ATS & S/U!

Let’s further analyze this game with the help of Troy Aikman and his wonderful NFL team ratings system. Here’s how Mr. Aikman has the Bears and Jets matching up based on the numbers through Week 7.

According to the AER, this is a mismatch. Chicago has the edge in all categories: offense, defense, and overall totals. By the way, when was the last time the Bears had a decided advantage in offense? Not many times…….. at least since Walter Payton retired.

These players are often criticized, sometimes rightly so. However, these two guys hold the keys to the Bears getting back on track this year and more importantly, this week. Reports say WR #12 Allen Robinson is out for this Jets game. Can Kevin White step up and replace Robinson? Last week White had his first targets and catches of the season. He had a 10 yard comeback route reception and of course, the 54 yard Hail Mary that was one yard short of the end zone. I still see great things from White. He’s a great kid and a terrific athlete. Will the Bears give him a chance in his contract year? If Chicago doesn’t resign him this offseason, you just know he’ll end up producing quality stats for somebody else for the rest of the career. I hope he sticks here in Chicago.

On the other side of the ball, OLB #94 Leonard Floyd will have a big chance to get his first sack of 2018 against New York. Superstar OLB #52 Khalil Mack has been declared out with his ankle injury so the Bears really need Floyd to step up. I think he’ll not only do it, but he’ll do it big! We predict not just one, but two or more sacks for Lenny Floyd this week!

Chicago is favored by 7.5 points according to Saturday’s Chicago Tribune. There is no doubting the outcome of this game. New York has a solid defense so I’ll go with the Bears but not by scoring 48 points like they did vs Tampa Bay. However, the Jets offense has no chance against a hungry Bears defense. The Bears will win going away. Take the Bears S/U AND to cover the point spread (ATS).

Have fun and enjoy this Sunday’s non-boring game!