The Chicago Bears improved to 11-4 on the 2018 season with just one game left on the regular season schedule. Chicago ousted the 49ers (4-11) in San Francisco, which was important for a couple of reasons.

1) At minimum, it gave the Bears the 3rd seed in the NFC Playoffs. There’s still a chance for the 2nd seed and the accompanied bye week if the Los Angeles Rams (12-3) lose to San Francisco in Week 17 along with Chicago beating the Vikings (8-6-1) in Minnesota.

2) It kept the positive momentum going for a young team that needs to gain all the confidence they can going into the Playoffs. Winning an NFC road game to improve to 4-3 on the road will help if and when the Bears need to win an NFC road Playoff game.

3) This win over San Francisco helped cement the fact that GM Ryan Pace “won” his trade with 49ers GM John Lynch during the 2017 NFL Draft. You may recall the trade was to swap 1st round spots (#2 and #3) among other picks for the rights to draft QB #10 Mitch Trubisky. So far so good for Pace who has a young QB leading a promising, peaking team to the Playoffs while the 49ers are sinking and stinking their way to the valley of the NFL.

QB #10 Mitch Trubisky – Mitch played excellently in San Francisco, at least according to the statistics. He went 25 of 29 for 246 passing yards, 1 TD, and 0 INTs. He also scrambled 5 times for 3 yards. He was sacked 3 times and lost 1 fumble, at least technically. The fumble was credited to Trubisky on the triple option RPO play in which he didn’t hand off to the running back on the zone read option, and then he scrambled and passed to the flat where Tarik Cohen (if I remember right) dropped the backwards pass. In other words, it was more Cohen’s fault than Trubisky’s. Other than that turnover, Trubisky played efficiently and won. Good enough for a Game Ball. 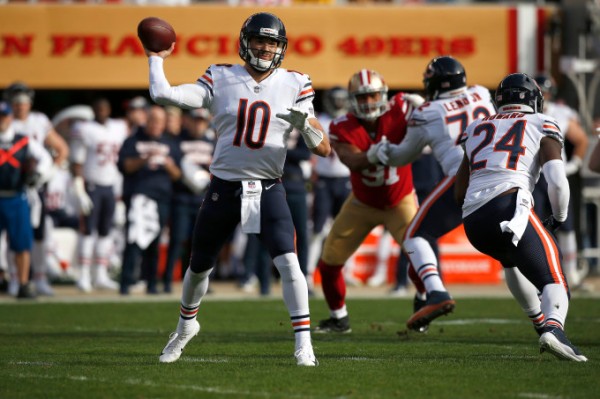 S #38 Adrian Amos – We don’t write about Adrian Amos as much this year as in past years. However, he’s been doing his job. He just doesn’t get the stats and the big plays like his fellow safety #39 Eddie Jackson. However, in this game Amos had the 2nd most tackles on the Bears defense. He recorded 8 total tackles, 7 of which were solo stops. Amos also had 1 PBU. A strong game deserving of a Game Ball for Amos, which was important given Eddie Jackson’s injury (he’s got an ankle) which caused him to stay home in Chicago while his teammates flew out to California. 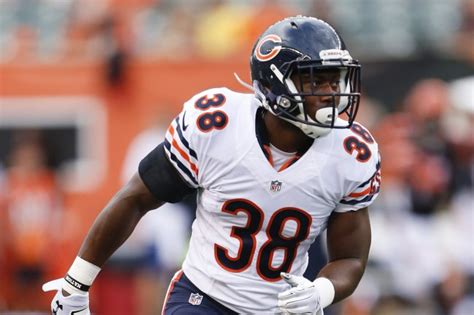 ILB #58 Roquan Smith – We write it almost every week. Roquan Smith keeps getting better and better. This rookie is leading the Bears in tackles! He didn’t even have a full training camp and yet he’s already becoming a major playmaker for this dominant defense. In the 49ers game, Smith led the Bears with 9 total tackles, 6 of which were solo stops. He had 2 TFL’s, 1 Sack, and 1 QB hit. Roquan is really good at blitzing from his inside linebacker spot. He’s a future stud and a current stud, even as a rookie. I know what you’re thinking. Stop glowing “Dutch”. I can’t. Ever since he was drafted I’ve been whispering “Hall of Fame”. Why not? Smith has done nothing to change my mind thus far. And he’s going to get better. Much better. He looks like and plays like former Bears LB’s Wilber Marshall and Brian Urlacher. Canton anyone? 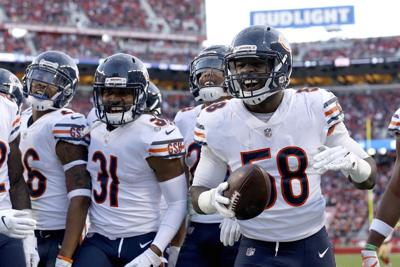 “Sure Chicago SHOULD win. They SHOULD cover that point spread. But will they? I expect the Bears to ease off the accelerator this week. I’m worried it could be their demise. It’s only natural to have a letdown game on the road against a 4-10 team, especially after a week where everyone is handing out Pro Bowl invites and praise and adulation are being sent from all corners of Chicagoland and even the national news media.

Nonetheless, I just think the Bears are too good for a four-victory 49ers squad. A 4 point spread isn’t even that much considering AER, records, and overall team talent. Bottom line: Bears by 6.

Next up, the Bears regular season finale is at Minnesota on Sunday afternoon at 3:25 pm. I better get working on that Vikings Preview. So long! 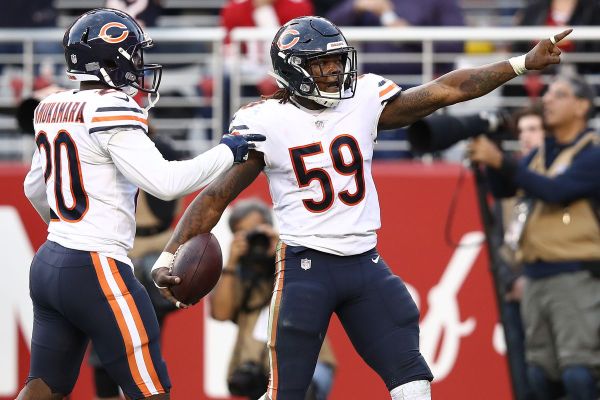