In August, most “experts” predicted a mediocre season for our beloved Chicago Bears. Most predictions were 5-11, 6-10, maybe 7-9, possibly 8-8 if everything broke right for the NFL’s founding franchise. Then on September 1 the Oakland Raiders traded stud OLB Khalil Mack to Chicago. Opening week was September 9 at Green Bay. Most of these so-called “experts” conservatively changed their Bears season predictions by a game or two improvement, so instead of 5-11, they might say 7-9. If they said 7-9, they usually said 8-8 or maybe 9-7. Again, I couldn’t believe the lack of belief in what GM Ryan Pace had built, along with former HC John Fox and DC Vic Fangio.

As a Chicago Bears writer, and enthusiast, I buy many publications. One of my favorites is the “Football Outsiders Almanac”. In their 2018 edition, they listed the Bears “2018 Mean Projection” as 6.2 wins. That means that most likely, this Bears team would win just 6 games and go 6-10 on the season. Buuuzzzzzzz! (That’s a buzz sound like the one on Family Feud when a contestant answers incorrectly.) They listed the “Postseason Odds” at 13.3%. Buuuuuuzzzzzzz! They listed the odds of winning 11+ games as just 5%. Buuuuuzzzzzzzzz! Their 2018 Bears tagline was “However, not everyone can be Sean McVay.” As it turned out, I guess not. Nagy beat McVay in the regular season in that incredible Week 14 Sunday Night Football game by a score of 15-6. A lot has been made of the L.A. Rams and McVay and how this Bears team headed by Nagy is very similar. I agree. In fact, Chicago has our own McVay. It’s Matt Nagy. I guess Football Outsiders tagline should have read “However, not everyone can be Sean McVay, but Matt Nagy can be McVay or better.”

The “Dutch Lion” started writing about these Bears in 2016 and therefore watched carefully for two full losing seasons filled with injuries and young players learning on the job. By writing weekly previews and recaps, I learned that this Bears team was ready to explode. I had to temper my enthusiasm realizing we had a brand new first-time head coach in Matt Nagy. I had wanted to predict 11-5 but settled on 10-6 with an NFC Wild Card berth in my Chicago Bears 2018 Season Preview. I had high hopes for the defending NFC North Champion Minnesota Vikings. I figured they would win the Norris again and they were even my Super Bowl 53 Champion. As it turned out, they struggled. However, the Bears surpassed even my “outlandish” expectations, to use a word by “Dutch Lion’s” critics.

Sure the season ended on a sour note, as it does for pretty much all of the NFL’s 31 other teams that don’t win the Super Bowl. Who cares? This 2018 Chicago Bears team will go in history as an exciting “We’re Back!” edition. Winning the NFC Norris with a 12-4 record and getting a home NFC Playoff game was fantastic. Moving forward the future is bright. In fact, it’s glowing.

Prediction: Football Outsiders 2019 Bears tagline will read: “Like McVay before him, Nagy leads Bears on ‘Super Bowl or Bust’ journey”.

Before we head off into the hopes and dreams of 2019, let’s recap that crazy final game of the ’18 season, the NFC Playoff loss to the Philadelphia Eagles by a score of 16-15.

OLB #94 Leonard Floyd – In his third season in the NFL, Leonard Floyd showed much improvement toward the 2nd half of ’18. In his first career playoff game, Floyd recorded 3 Tackles (2 solo), 1 Sack, 1 PBU, and 2 QB hits against Philadelphia’s QB Nick Foles. Overall, it was a very good season for Floyd despite recording his career low in sacks with 4. It’s not all about sacks. Floyd recorded career highs in many categories including games played (16), total tackles (49), interceptions (1), TD’s (1), PBU’s (4), and Stuffs (5). Leonard is going to get a lot better in ’19 as long as he stays healthy. 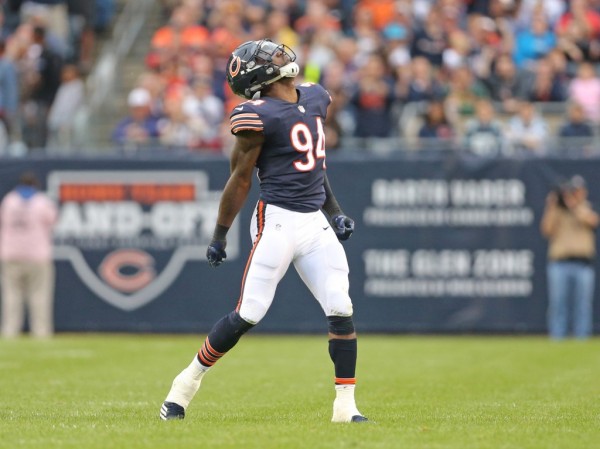 WR #12 Allen Robinson – Allen Robinson is the Bears #1 WR. Is he a true #1 though? I’m not sure, but he played like it in this Playoff game. Robinson had 10 catches for 143 yards and 1 TD on 13 targets. I believe these receptions and yards totals were new Bears franchise single-game Playoff records (I’d have to double-check but I don’t feel like it right now, so too bad.). Chicago only put up 15 points but Robinson was really good. 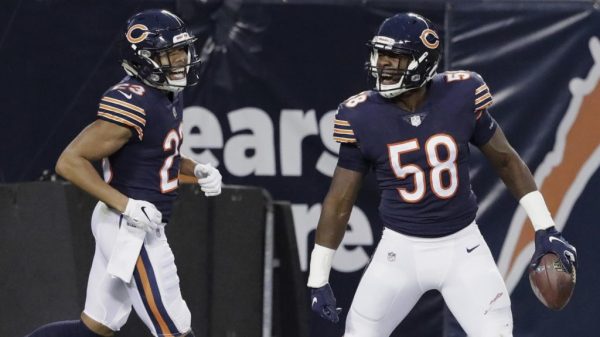 QB #10 Mitch Trubisky – One of the best things about this NFC Wild Card loss was the performance of the Bears young franchise quarterback. Trubisky threw for 303 yards on 26 of 43 attempts. He had one passing touchdown and zero turnovers. More importantly, he showed us a glimpse of his playmaking ability with the game on the line. His pass on the last drive to set up the ‘Double Doink’ kick by K #1 Cody Parkey was spectacular. He threaded the needle to get Chicago in field goal range. Because of the disappointing finish, Trubisky’s throw got overshadowed. If Parkey had made it, everyone would have anointed Tru as the greatest young QB since…..DeShaun Watson? Patrick Mahomes? Tom Brady? Nonetheless, it was a great way to go into the offseason with hope. 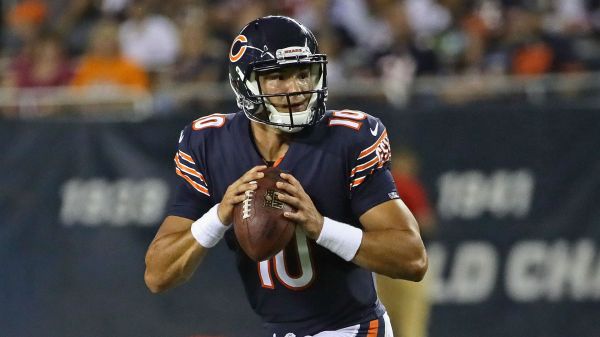 In our NFC Playoffs Preview, we wrote:

According to Thursday’s Chicago Tribune, the Bears are favored by 6 points. Despite the question marks above, I feel confident in this Bears team taking down the defending Super Bowl Champions. The home field advantage is huge in the Playoffs. This Bears team, especially Vic Fangio’s defense, is on a mission. This year, the Bears are simply a better team.

So that’s it for 2018. Remember, don’t worry. This season was kind of like 1984. This was a young team with a first year head coach who tasted success but left wanting more. ’19 is gonna be a big year! I’m hungry thinking about it. Imagine the players and coaches. We’ll see you on the journey. Next up…..the 2019 NFL Draft.