As we enter the 2019 NFL postseason, it’s time to make our annual predictions. Last year, we (with help from Gary “The Gut” Goombah), picked the Los Angeles Rams over the Kansas City Chiefs. As you may remember, the Rams advanced to Super Bowl 53 but lost to the New England Patriots in a miserable game. Remember how bad the game was? It was an absolute stinker, one of the worst Super Bowls ever. It was a bad end to an awesome postseason. Nonetheless, we were proud of correctly predicting the Rams victory over the Saints in New Orleans. Can we do as well or even better this year? We’ll see.

AFC WILD CARD ROUND : #3 New England Patriots (12-4) over #6 Tennessee Titans (9-7) – The Patriots are favored by 4.5 points. I would love to pick the Titans in this matchup but I just can’t pull the trigger. Even though I fully expect Tom Brady and Bill Belichick to lose before being able to defend their Super Bowl Title, I can’t pick them to lose at home in a Wild Card game. There’s no way New England can win four games to repeat as Champions…right? PICK: New England Patriots

AFC WILD CARD ROUND : #4 Houston Texans (10-6) over #5 Buffalo Bills (10-6) – Houston is favored by 2.5 points. This may be my favorite quarterback matchup in the entire NFL Playoffs. The Bills wunderkind Josh Allen goes on the road to face Houston’s DeShaun Watson. As many of you know, I’m in love with both of these franchise QB’s. We saw Josh Allen in college at a Wyoming/Nebraska game in Lincoln in 2016. Allen had a rough day throwing four interceptions but he also left us awed with a rollout Hail Mary type throw just before halftime. Talk about a gun! (see video below). The entire crowd at Memorial Stadium dropped their jaws at the amazing throw. Maybe a Bills scout was there that day. Meanwhile, many of you also know my infatuation with Clemson’s DeShaun Watson. We called for the Bears to take Watson at #3 overall in the infamous 2017 NFL Draft. Instead Bears GM Ryan Pace moved up to #2 overall to take Mitchell Trubisky. So far Watson has the edge on that debate. Now at the end of his third season, he’s in the AFC Playoffs for the second year in a row. I expect the Texans to ride Watson to victory. PICK: Houston Texans

AFC DIVISIONAL ROUND : #1 Baltimore Ravens (14-2) over Houston Texans – There’s simply NO WAY Baltimore loses this game at home after a bye week. I don’t care who the Ravens play in this game. They will wipe out their opponent. Pick: Baltimore Ravens…BIG!

AFC DIVISIONAL ROUND : #2 Kansas City Chiefs (12-4) over New England Patriots – This is a revenge game for the Chiefs as they will host New England in the AFC Playoffs for a second consecutive year. Remember last year’s AFC Championship game? If Chiefs defensive end #55 Dee Ford didn’t line up offsides on a critical 3rd and 10 play on the Patriots last drive in regulation, the Chiefs would have won. Tom Brady was intercepted on the play but of course it was called back due to the offsides. Was it legit? Probably, as you can see in the video below, starting at the 14 minute mark. However, it had no impact on the play and proved once again how lucky the Patriots have gotten time after time. I look for the Chiefs to win big in this rematch. PICK: Kansas City Chiefs

AFC CHAMPIONSHIP : #2 Kansas City Chiefs over #1 Baltimore Ravens – I really hope this matchup happens in this year’s AFC Championship. The Chiefs and the Ravens have supreme firepower. They have fantastic young quarterbacks in Patrick Mahomes and Lamar Jackson. These guys are the future of the league. Who is better? It’s a toss-up. They are the last two MVP’s. Lamar uses his legs more while Mahomes uses his howitzer arm more often. They both win while inspiring their teammates. I could see either team winning this game. The Ravens are home. It’s hard to pick against them but I’ll go with the Chiefs. I see this as a continuation of where they left off last season. This time they will get lucky and win the coin toss in Overtime. PICK: Kansas City Chiefs

NFC WILD CARD ROUND : #3 New Orleans Saints (13-3) over #6 Minnesota Vikings (10-6) – New Orleans is favored by 7.5 points. This game is a rematch of an 2017 NFC Divisional Playoff game in Minnesota. Miracles do indeed happen (see video below). Well, Minnesota doesn’t have another miracle in them. We fully expect the Saints to win and cover the point spread. PICK: New Orleans Saints

NFC WILD CARD ROUND : #5 Seattle Seahawks (11-5) over #4 Philadelphia Eagles (9-7) – Seattle is the only road team favored this weekend, by 1.5 points. Carson Wentz has the Eagles flying high, as they’ve won four games in a row. However, I simply feel that Seattle has the better team. Russell Wilson is the man. PICK: Seattle Seahawks

NFC DIVISIONAL ROUND : #1 San Francisco 49ers (13-3) over #5 Seattle Seahawks – This would be a sweet matchup in the NFC Divisional Round. Great offense against great defense. I think the Cowboys D is underrated and close to fantastic. It’s the front seven. They deserve a ton of credit. I’ll take the Saints to win in their home dome, but barely.

NFC DIVISIONAL ROUND : #3 New Orleans Saints over #2 Green Bay Packers (13-3) – One of the hardest things about being a sportswriter is knowing I have a bias, so how do we account for that in our previews and selections? All people have some bias, by nature. I’ve been a Chicago Bears fan all my life. Therefore, I’ve always disliked the Green Bay Packers. That’s just who I am and who I’ll always be. Having said that, we have to justify our selections if we’re picking a team we like to win or likewise, against a team we dislike. In this case, it’s not that hard for the “Dutch Lion”. Why? Because we just don’t think the Packers are that good. Meanwhile, we think highly of the Saints.

Drew Brees versus Aaron Rodgers will get all the hype but this game is about their surrounding cast. The Saints are just way more talented than the Packers. Plus, they have a super experienced coach in Sean Payton while Green Bay has a first year coach in Matt LaFleur. Give credit to LaFleur and his Packers. They DO indeed find a way to win games. However, they can barely beat teams they should be swamping. For example, what was up with the Redskins game in Week 14? They barely beat Washington 20-15, a team that finished 3-13. The Packers also had a hard time with virtually everyone on their schedule, including both games against the Detroit Lions (3-12-1), the Carolina Panthers (5-11), and the Los Angeles Chargers (5-11). Only five of Green Bay’s 13 victories were by more than one score. The Packers were 3-2 against other Playoff teams. They beat the Vikings twice and a non-Patrick Mahomes led Chiefs team but lost to the Eagles and 49ers. In fact, they got ‘kilt’ by the Niners 37-8.

Meanwhile, the Saints lost to the 49ers as well, but by two points instead of 29 points. Edge: Saints. The biggest thing going for Green Bay in this game is obviously home field advantage and the bye week.  The Saints had the same 13-3 record as Green Bay, but lost out on the Playoff seed tiebreaker due to NFC conference record (10-2 versus 9-3). It won’t be enough for the Packers to turn it into a victory. Using the unbeatable website Football Outsiders, their groundbreaking DVOA statistic has New Orleans ranked 4th in the NFL while Green Bay is 10th. The Saints are just too good. PICK: New Orleans Saints

NFC CHAMPIONSHIP : #1 San Francisco 49ers over #3 New Orleans Saints – Just like the AFC Championship, I could easily see either team winning. The four teams in my Championship weekend matchups are far better than the other Playoff teams.  They have four of the best quarterbacks and four of the best defenses. Their rosters are stacked and three of the four have a bye in the Playoffs. In this game, I like San Francisco at home. Many have forgotten but the 49ers have always had a huge home field advantage going way back to their glory years in the 1980s. Once again, the Niners have a loud crowd that gets fanatical in cheering for their boys. Led by pass rusher Nick Bosa, San Francisco will ride their defense in this rematch of the Week 14 game in New Orleans that was a high scoring 48-46 affair. PICK: San Francisco 49ers

Kansas City Chiefs over San Francisco 49ers – This would be a potentially outrageous Super Bowl. Who wouldn’t want to watch the incredibly talented Chiefs and Niners battle on the beach in Miami for the 2019 Championship!?! Could overlooked quarterback Jimmy Garoppolo lead the 49ers to their first title since 1994? Could Damien Williams make some big plays as the unsung weapon on KC’s offense? Led by 2018 MVP Pat Mahomes, I think the Chiefs will win this game with Chiefs receivers Travis Kelce and Tyreek Hill exploding for a few big plays against the stout coverage of 49ers cornerback Richard Sherman. Longtime great NFL head coach Andy Reid will lead the Chiefs to their first Super Bowl victory since their 1969 season’s championship was crowned in Super Bowl 4. That was Hank Stram’s group led by QB Len Dawson and an incredible defense. 50 years ago sounds similar to this year. Wow, half a century later, I guess not much has changed. PICK: Kansas City Chiefs

I hope you enjoyed this Preview. We loved writing it. Enjoy the games! 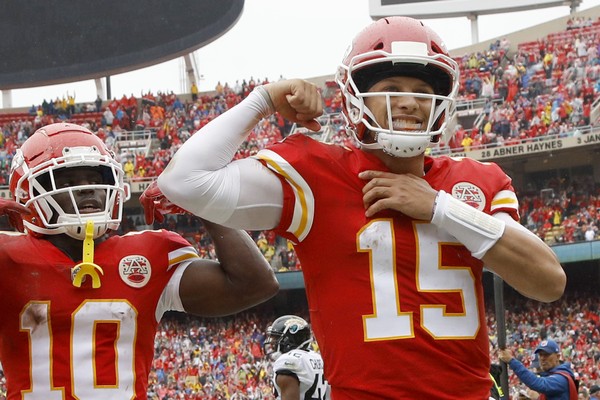