I remember getting SO PUMPED to watch the NCAA Tournament Selection Show as a kid growing up in the 80s. As a really young guy in the early 80s, my parents were HUGE DePaul Blue Demons fans. Now most of you probably don’t remember, but DePaul was an enormous thing in Chicago when Ray Meyer coached from 1942-84. After getting to the Final Four back in 1979, DePaul was even bigger than you can imagine in the early 80s. There were many years where DePaul entered the Tournament with 1 or 2 losses and a #1 or #2 seed. 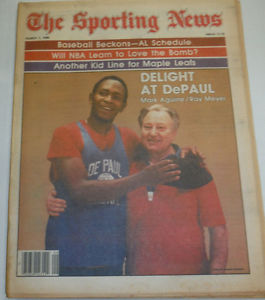 We also cheered for the Fighting Illini of Illinois. My biggest goal around the age of 10 was being in the Orange Krush student fan section! Funny thing was, a few years later I was surprisingly admitted to the U of I and I turned down the opportunity to be in the Krush. What was I thinking? When people ask me now about my biggest regrets, I sometimes mention the Krush thing that ironically now crushes me. 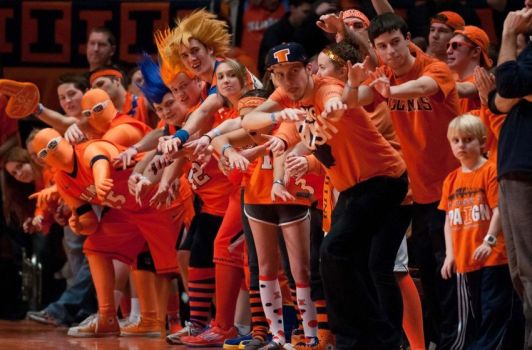 Anyway, the first bracket I filled out was 1984. This was back when teams had byes because there were only 48 teams invited. The regions had 12 teams each, with the top 4 getting rewarded with byes. In other words, these teams were already in the Round of 32. Obviously in the pre-internet days you couldn’t look up anything online so you had to BE READY with pencil in hand and your blank bracket that you cut out of the Sunday paper. In our case my Dad bought the Chicago Sun-Times so we valued that one document with our lives. In addition, I created my own brackets rather than using the drab black and white newspaper ones. Then I found out Sports Illustrated used to insert a blank bracket in the next week’s issue and so I used those colorful Camel cigarettes ad gems as well. 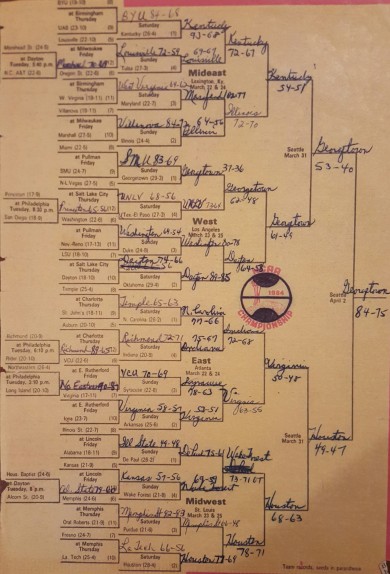 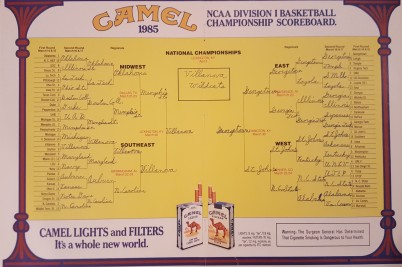 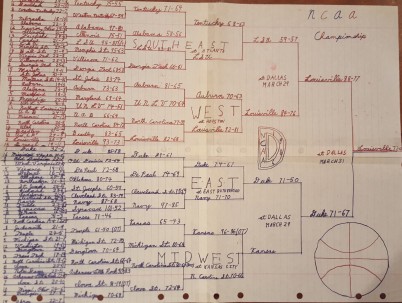 My mom and I would hastily fill in our bracket when Jim Nance, Brent Musburger, Billy Packer, and Tim Brant would announce to the entire world who would be playing whom. (As one example, check out the 1987 Selection Show here: https://www.youtube.com/watch?v=EUIavVHt_qU) 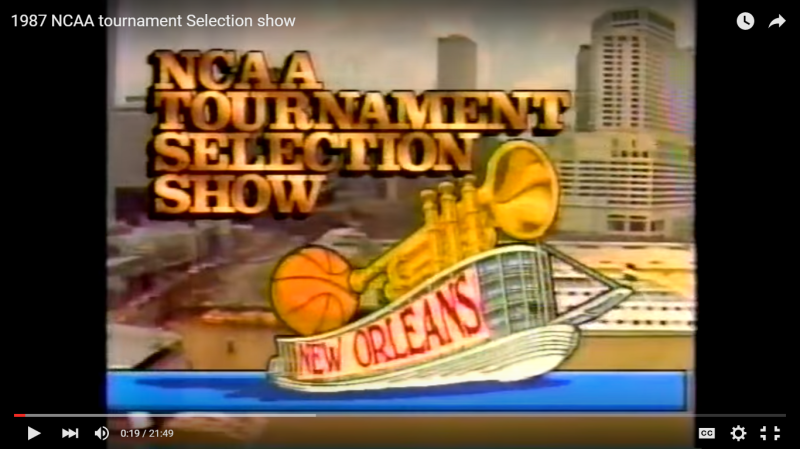 “Uh oh….I missed one” I would call out to Mom. “Rats, I did too” she’d reply, which meant we now had to wait until that evening’s 10 o’clock news when Howard Sudberry or Mark Giangreco would recap the selections in their 3 minute sports reports that aired about 10:22pm! If you missed it again, well…..I guess you just had to wait until Dad brought home Monday’s paper.

Back in those days the Selection Show was 30 minutes. It was concise and……awesome! Years later CBS expanded it to an hour. This year you may have heard that CBS ran a two hour show from 4:30-6:30pm central time. C’mon man! Now I’m a 40 year-old dad with a wife, a job, a house, and two kids and it’s hard to sit there and watch a 2 hour show that could and should simply be about announcing the teams, their seeds, and the pairings. Let me write this again……CBS OWNS this information and drags it out for 2 hours so they can yap about all the BS and all the teams that were hosed, etc….and they can sell ads for $5 million per 30 seconds (ad rates are exaggerated and guessed at because I’m too lazy to research the factual ad rates) because they know virtually EVERY sports fan in America is watching. Dude! How lame is this?!? Well, they just lost one of the “EVERY” sports fans.

I asked my wife earlier in the day if we could schedule our dinner out to a restaurant AROUND the show, but first I had to look up the scheduled time. She agreed so I grabbed the remote and scanned the U-Verse guide. Expecting it to be 5-6pm or something like that, I was hoping we could go out either before or after the show. What in the world!?! I was appalled to find the 2 hour program (from 4:30-6:30pm central time) was eliminating any chance for the “before or after” plan. Thanks CBS!

Thanks for ruining what was once awesome. If you want to run a 2 hour Tourney show, please announce the pairings in the first half hour and then the diehards can watch your “analysts” break it down for 1.5 hours AFTER the announcement show. But no…..couldn’t do that. Oh well, just another thing society has ruined due to overexposure.

Hopefully after the fallout from this year’s disaster (including the “leaked” brackets found on Twitter) CBS will go back to the old format of 1 hour or even better, the concise 30 minute version of my memories. If not, it will just be one more head-shaker in a lifetime filled with them. As CBS analyst Charles Barkley would say, “Ray Meyer is rollin’ over in his grave.” Then Kenny Smith would add, “Mark Aguirre is rollin’ over in his grave.” Now THAT is some solid analysis. Those guys are hilarious. Maybe I COULD watch this for 2 hours. 😉 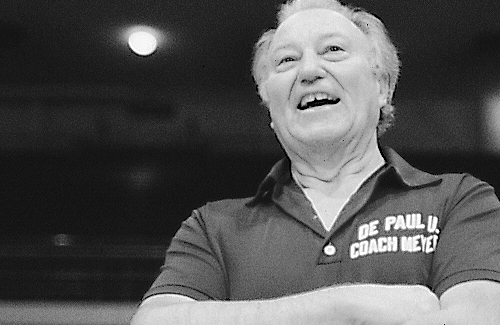