The “Dutch Lion” is pumped for baseball’s big return in 2017. I’m fully armed with several preview magazines. We’ll recap those along with detailing my own crystal ball predictions in this week’s “Reid ‘Em & Weep”!

Every year I purchase the Baseball Prospectus annual and try my best to devour it team by team, player by player, until I’m overstuffed with baseball info. My brain can’t handle it all though so it helps to write out my opinions so that we can turn back the clock in October to find out how we did. The Dutch Lion can’t wait to rip on publications left and right this year as they get their picks wrong. The biggest problem that most pubs have is they have little to no imagination. They pick repeat winners or a rematch from last year with the ‘other’ team winning. Since last year the hated Cubs (the ‘Cooooo’ in “Lion” parlance) squeaked by the Cleveland Indians to nab their first Title since before World War I (“Hey, anyone can have a bad century!”), this year most magazines are going with either a Cooooo repeat or maybe an Indians revenge Championship over the Chicago NL ballclub. Oh please! There’s no way the Cooooo will repeat. Nobody repeats (last time 1998-2000 New York Yankees threepeat) much less that overrated North Side bunch of hot dogs including Manager Joe Madden, 2B Javier Baez, and fresh new hot doggers CF Albert Almora and C Wilson Contreras. Those guys need to take a course in humility with a fresh squeeze of “let’s turn down the ego” juice. Don’t get me started on Baez’s “no look tag” in the World Baseball Classic. People are praising him for that? Oh please! That was a hot dog move with extra spicy mustard. For me it provides extra seasoning to turn up my hatred for the Cooooo even higher.

For those that don’t know, I – I mean the “Dutch Lion” – is from Lake Zurich, Illinois which is a northwest suburb of Chicago. Most people from up here are Cubs fans while I’m a diehard Sox fan. This is all thanks to my parents who are Southsiders from Evergreen Park, IL. Think Oak Lawn, Orland Park, Palos, South Holland, etc. Anyone from those parts can tell you that being a Cubs fan from there is unheard of and frankly, sacrilegious. So obviously both my parents were Sox fans and even though they moved up north in the 70s they didn’t stop cheering for their team. I likewise was a Sox fan since my first ballgame at the Old Comiskey Park in 1982.

The Cubs/Sox rivalry goes way back, all the way to the 1906 World Series and beyond. From what I’ve read, Chicagoans were split on who they cheered for a couple of reasons. First was the geography of what part of the city one was from. Another thing was your occupation and education level. In simple terms, white-collar workers were Cubs fans and blue-collar workers were White Sox fans. Cubs fans were bankers, corporate managers, Chicago Board of Trade workers, etc. Sox fans were plumbers, sanitation workers, stockyard workers, meatpackers, etc. So there was a cultural aspect to being a fan, not just simply North Side vs South Side as is now known as the main reason for your fandom. So needless to say there is a great history there and it is not to be forgotten.

When MLB introduced interleague play in 1997, it only heightened the rivalry because the teams actually played each other in a real game that counted for the first time in 91 years (There was a yearly exhibition game for years that didn’t officially count, even though it did for the fans. Remember when #45 Michael Jordan hit an RBI double at Wrigley Field in 1994? That was probably the highlight of the Crosstown Classic era.)

So now that I explained my love/hate relationship regarding the Sox and Cubs, I’d like to begin my MLB Predictions with this thought. Cubs fans, I hope you’re happy because…….yeah, it’s over now. Last year is over, your Championship era is over. Let’s start a new streak of futility that will last another 108 years!

American League East – A really good division with 3 or 4 possible contenders. It’s hard to pick against Boston’s monstrous lineup along with their starting rotation highlighted by Chris Sale, David Price, and Rick Porcello. Ultimately, RP Craig Kimbrel closes the book on some really good lineups including Toronto and Baltimore. Those three teams could put their hitters up against any in baseball.

American League Central – The AL Central will probably go to the Injuns (Shout out to Mark Twain’s “Injun Joe” from “Tom Sawyer” & “Huckleberry Finn”). Cleveland is superb all around. The defending AL Champs added DH Edwin Encarnacion to an already powerful lineup while their starting rotation is right up there with Boston’s as they throw Corey Kluber, Danny Salazar, Carlos Carrasco, Josh Tomlin, and Trevor Bauer. Even more importantly, Chief Wahoo’s bullpen is deep with multiple closers, one from each side in RHP Cody Allen and LHP Andrew Miller. Meanwhile, the Sox and Twins are rebuilding. Who’s better? Who knows! Ultimately I think the Sox will tank, probably trading Jose Quintana, David Robertson, and Melky Cabrera by the trade deadline. However, there’s some good young talent there including Carlos Rodon, Tim Anderson, and even Avisail Garcia. Don’t sleep on Avi….many Sox fans have already given up on him but I plead with you to not give up. He’s only 25 years old and I would bet he’ll start dominating in 2017. Watch out for the Sox in ’18, ’19, and 2020 when young guns like Yoan Moncada, Michael Kopech, Lucas Giolito, and Reynaldo Lopez are contributing for the big league club. For now, watch for the Sox major league club to struggle while the AAA Charlotte Knights dominate down on the Farm.

American League West – This division has a wide disparity from top to bottom. The Rangers, Astros, and even Mariners could all potentially win the AL West. The Angels might be improved but too many holes exist while the A’s are just plain stinky.

National League East – The Nationals might be my most confident pick as a division champion. They are stacked from top to bottom. Their weak spot is the bullpen so expect them to deal for multiple relievers by the trade deadline. The Nats will grab someone like David Robertson from a seller like the ChiSox in July.

National League Central – Everyone always assumes the Cubs will win this division easily but don’t sleep on the Cards or even the Bucs. It was just two short years ago that the Cooooo finished in 3rd Place. Last year St. Louis slumped but watch out for “the Cardinal Way” as it looms under the Arch.

National League West – One of the best divisions in baseball, both the Dodgers and Giants are super solid while even the D’Backs and Rockies look somewhat good on paper. Padres……no dice. Look for the Dodgers and Giants to duel each other all year, including at the trade deadline. Those pickups in late July will propel them both to postseason success. Competition breeds winning when it counts.

– Revenge for San Francisco after last year’s playoff debacle. You may recall that the Giants blew a 5-2 lead in the 9th inning in Game 4 against the Cubs at AT&T Park. Their closer spot was a weakness all season and it blew up in their faces in this elimination game. Let’s say the Giants had closed out that victory? That would’ve put them into a deciding Game 5 at Wrigley with Johnny Cueto looming as the starter while Mad Bum would’ve been available in the bullpen. My gut tells me the Giants would’ve added more misery to the Cooooo’s 108 year drought. This year, San Fran went out and got one of the game’s best closers in Mark Melancon. This year they’ll win.

– These teams played each other in the 2014 NLDS. I remember Bryce Harper going deep into the right-field stands at AT&T Park, almost out into McCovey Cove. This sounds like fun. Let’s do it again!

– This one makes me think of Jack Clark and Pedro Guerrero. 80s at Eight? Timewarp Tuesday? I’m in!

– I love both squads. If it came down to this matchup, I’d be cheering for D.C. but I have a gut feeling this is the Dodgers year. Hey Vin, what do you say?

– L.A. is just so good. Did you know they won the AL West four years in a row? I fully expect Clayton Kershaw to win a ring someday. Why not this year? The Dodgers are stacked with Corey Seager at SS, Justin Turner at 3B, Adrian Gonzalez at 1B, Yasmani Grandal at C, Joc Pederson and Yasiel Puig in the OF. Outside of Kershaw, their starting rotation includes Kenta Maeda and Julio Urias. Waiting in the ‘pen is Kenley Jansen, one of the greatest closers in the World. It all adds up to their first World Championship since Kirk Gibson, Orel Hershiser, Tommy Lasorda, and Vin Scully’s 1998 World Champs. Cue the music………”I love L.A.!”

After writing down my predictions, I looked at the major publications 2017 predictions. As it turned out, my crystal ball closely resembled Sports Illustrated’s picks courtesy of their March 27-April 3 double issue. They too predicted a Dodgers over Indians World Series. So I guess I’m “all in” with SI this year. 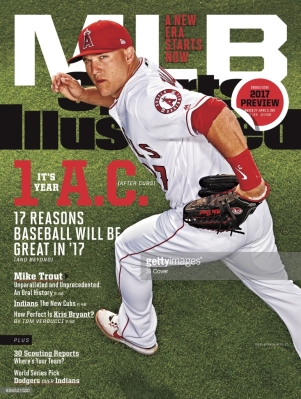 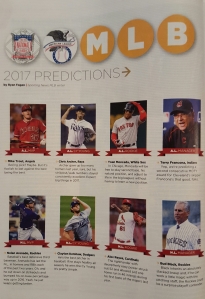 Three writers (Mark Gonzales, David Haugh, and Paul Skrbina) picked Boston over the Cubs. Colleen Kane picked Cleveland over Los Angeles. Cubs beat writer Paul Sullivan picked……the Cubs over Boston. Big surprise. This guy is really getting on my nerves. He’s a big homer and his bias against the White Sox really chaps my hide. Sure I’m biased, but at least I admit it. Meanwhile, does he really think the Rockies will beat out the Dodgers for 2nd place in the NL West? At least Sullivan has guts. If he’s right, I’ll tip my cap. If he’s wrong, I expect an acknowledgment from him. Ha! Here are Sullivan’s picks by division:

To recap, we have eight predictions from around the nation, nine including the “Lion’s”. We have 3 for the Cubs, 3 for the Red Sox, 2 for the Dodgers, and 1 for the Indians. Nobody picked the Nationals, not even to win the National League and GET to the World Series. Oh man! I should’ve picked Washington. I’m having regrets already.

Next issue of “Reid ‘Em & Weep” will feature a list of the “Dutch Lion’s” favorite teams, as well as faves and hates from the “Lion’s” friends. I know what you’re thinking…..another tease? This time I promise. No more teasing! I better get writing……now!