The sports world is so busy right now that I’m gonna write two articles this week. First of all, let’s get to the NFL and review the free agency madness. Big time moves this week by the Chicago Bears along with the rest of the NFL. So far, here’s a recap of the Bears moves:

Resigned (Staying): CB Johnthan Banks (I don’t know enough about him), K Connor Barth (I’m ok with him), C/G Eric Kush (I like him)

Free agents signed (Coming): CB Prince Amukamara (Jaguars) (I love this former Nebraska Husker!), OT Tom Compton (Falcons) (Never heard of him), CB Marcus Cooper (Cardinals) (Never heard of him), S Quintin Demps (Texans) (He’s good but he’s 32 years old and has been with 5 other teams already? Sounds like a journeyman), QB Mike Glennon (Buccaneers) (I don’t think he’s the long-term answer but the Bears are gonna draft a QB anyway. Glennon might only have one year if he’s worse than average or two max if he’s mediocre or better. Of course his future depends on the draft picks probably more than his own play.), TE Dion Sims (Dolphins), WR Markus Wheaton (Steelers), WR Kendall Wright (Titans) (I like this former Baylor Bear).

They Gone! (Going): QB Matt Barkley (49ers) (I liked him but turnover prone as he tried forcing it to make plays for a lousy team), QB Jay Cutler (released) (I’ve always been a big Cutler backer despite his faults. I’ve been preaching for too many years that it’s not all Cutler’s fault. In fact, it’s everybody else’s fault more than his. He’s not without fault though either. Overall, I think Cutler was/is unfairly criticized but we all know it’s time to move on), QB Brian Hoyer (49ers) (Too conservative with short throws, I’m fine with him leaving), WR Alshon Jeffery (Eagles) (I used to love him but he’s overrated and proved to be unreliable once Brandon Marshall left. He’s not a #1 WR.), G/C Ted Larsen (Dolphins) (Good but the Bears are overloaded at C/G), TE Logan Paulsen (49ers) (If you read my Football Nation columns, you know I hate this guy. He stinks!…like a skunk), DE Cornelius Washington (Lions) (Never did much, not a good fit for a 3-4 defense).

I know what you’re thinking……Logan “The Skunk” Paulsen is gone! Can you believe the 49ers signed him? What were they thinking? They must not have read my columns last season. Meanwhile, the quarterback carousel is officially underway as Jay Cutler, Brian Hoyer, and Matt Barkley are out on the curb, either waiting for the garbage man or already at the landfill dump in the cases of both Hoyer and Barkley (they signed with San Francisco). Man those 49ers….are they tanking? They must be trying to lose. It’s hard to believe they were really impressed by Chicago’s 2 QB’s and Paulsen when they lost at Soldier Field in December. Who knows? Maybe this is proof of why they have fallen to the bottom of the NFL so quickly. During the Jim Harbaugh years, they were awesome. Then it all fell apart so quickly. Strange, but that’s the modern NFL.

Regarding the NCAA Tournament Selection Show, CBS did a decent job announcing the pairings, outside of Clark Kellogg’s suit……”Oh Gawd…..she is so gordo!” The show was an hour and a half long on CBS from 4:30 to 6pm central time. The field was completely revealed by 5:10pm so it took only about 40 minutes to reveal all the teams, which I guess wasn’t too bad. For more of the “Dutch Lion’s” thoughts on the Tournament, check out my column from a year ago when I founded this blog: Too Much of a Good Thing…..

Illinois St. got hosed by the NCAA Tournament! ISU had a 27-6 overall record, 17-1 in the Missouri Valley Conference, with a 33 RPI ranking. I feel bad for our Redbird friends. They lost to Wichita St. in the MVC Championship game but had beaten Wichita earlier in the season. That’s too bad for Bloomington, IL. Sad!

Meanwhile, congratulations to Northwestern for finally making the Tournament. Can you believe they’ve NEVER made the Tourney before? Hey, they’ve only been doing the Tourney for 78 years. Anyone can have a bad century. Just ask your North Side friends from Clark and Addison. LOL! It’s hard to believe, except when you think about it, they’ve always completely stunk. But times they are a changin’. Coach Chris Collins is awesome. How long until he leaves for a better job? I’m sure he’s eyeing that Duke job should Coach K ever retire. You’d also think Duke must be thinking the same thing about their future. Coach K has been there for about 40 years now. He won’t last forever. Who’s at the top of their list? I’m betting Chris Collins is #1. Which brings me to other coaching news……

The beloved Fighting Illini fired Coach John Groce on Saturday. The “Dutch Lion” is sad. I’m not sad because of the firing as much as I’m just sad that it didn’t work out with Groce. He seems like such a great guy. He’s always been more than professional. He’s energetic. He succeeded at Ohio. Why wasn’t he successful in Champaign? It’s hard to put a finger on it exactly. It was many things such as the lack of a great player(s), the inconsistent rotation of players, the lack of discipline over the years such as Kendrick Nunn’s dismissal, and the recruiting success or lack thereof. What is the identity of Groce’s teams? What is his offense? I’ve been trying to figure it out for the last 5 years and I can’t figure it out. Maybe I’m just stupid but it feels like it’s typically an offense driven by a dynamic point guard who Groce hopes will create for himself and the team. That’s why the recruiting misses on Jalen Brunson in ’15 (now a SOPH at #1 Villanova) and Quentin Snider in ’14 (now a JR at Louisville) really hurt the Illini immensely. Groce gives a lot of on-court freedom to his players, but these guys were never able to figure it out for themselves. It didn’t help that PG Tracy Abrams missed those two seasons in a row (2015 and ’16) with brutal season ending injuries. Like many of you, I was pumped going into this year when I realized Abrams was actually going to play. It turned out he wasn’t as good as he used to be. It seemed he never fully recovered from the ACL and the Achilles injuries. It’s too bad what happened to him. Why did Groce keep going to Jaylon Tate in his stead? I think everyone EXCEPT Groce knew Tate stunk. I’m sorry but just because you’re from Simeon doesn’t mean you’re good. I honestly think I was as good as Tate, and I wasn’t very good. Finally when it was too late, Groce stopped playing Tate 8 games ago (he only played in one of the last eight games for 7 minutes). Overall it was a mix of bad luck, bad timing, and poor execution of an offense that NEEDS a dynamic point guard. Of course, Groce finally recruited an excellent class to Champaign this year (#11 in the NCAA and #1 in the Big Ten) that he’ll never get to coach. Life is weird, no?

Oh the shenanigans! During what will be known as the Groce Era (2013-’17), you could just sense that there was something wrong. The lack of consistency was maddening to diehard Illini fans like myself. Many times over the last five years it seemed like Illinois was so close to getting it all together, but they just never did. So now Groce is gone. Who’s up next?

The early candidates according to the Chicago Tribune are:

Out of those, I like Martin and Marshall. Thinking outside of that quad, how about Chris Collins? Is he worth a call? If I’m AD Josh Whitman, I’ll make a collect call to Evanston to gauge Collins’ interest. Is it awkward that Groce beat Collins head to head this year, not once but twice?!

Why not give a call to Lawrence, Kansas (the U of I can afford and should budget for this one) and see if Coach Bill Self wants to make news with a huge comeback to Champaign? Now THAT would be a story! BREAKING NEWS: “I’m tired and bored of winning Big 12 Championships in Kansas and want a new challenge by taking on an old and unfinished challenge by journeying back to Champaign, IL” – Bill Self reveals his true ‘Self’ an hour before #1 seed Kansas NCAA Tourney opener on Friday. (Hahaha LOL!)

Or better yet, Self could wait until Saturday (March 18) and send an “I’m Back” fax to Champaign media 22 years to the day after Michael Jordan’s March 18, 1995 comeback with the Bulls. That would be….ironic…..and INCREDIBLY AWESOME! Check out J.A. Adande’s ESPN.com article about Jordan’s fax. Good stuff. 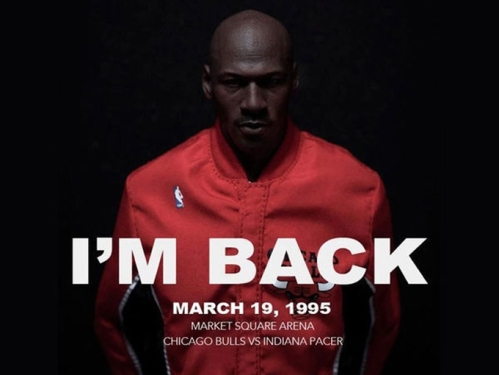 That’s enough comedy for today. Later this week, the “Dutch Lion” attacks the Bulls, reveals his plans for the Bears top pick in the NFL Draft, and writes a special feature on the “Lion’s” friends. See ya later this week!