I’ve never been a morning person. Virtually my entire life, I go to sleep late and wake up late. I have to say I’m sick of people belittling me and others that sleep later. It’s not fair and it’s a stupid societal norm. Who says early risers are better than others? Sadly, most people agree with this outdated maxim that in order to be a good respected person you need to wake up early. It’s all bull. Get over yourselves early risers.

Enough with the early morning bias. Where did this bias begin anyway? It’s probably an old-time tradition started before the lightbulb was invented. People arose from their slumber when the sun rose. People went to bed when the sun went down. Well guess what? Now there’s electricity.

While all you guys are already sleeping at 9 PM, I’m working my butt off doing household chores, fixing things, researching things, and writing stuff. You know why? Because you finally went to sleep so I could concentrate without you bothering me and distracting me with all your “I’m so tired” crap. Guess what? I’m not tired…….because I slept in!

You do more before 9 AM than I do all day? Hey Army, that’s bull. And who cares? By the way, while you’re sleeping at night I get more done than you’ve ever dreamed of. So get off my case you self-absorbed military police. I get more done after 9 PM than you get done in 3 days combined. 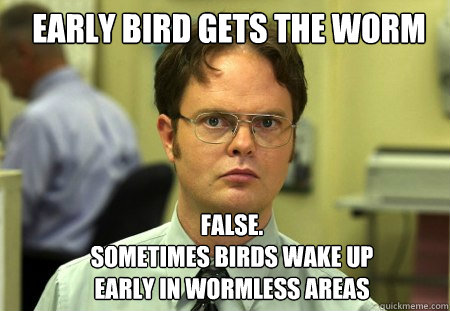 I was reading this story in the Chicago Sun-Times written by Patrick Finley. It was a story about Chicago Bears WR Dontrelle Inman and how he has adjusted his body clock to wake up early. When Inman was with San Diego, Eric Weddle, Phil Rivers, and Danny Woodhead among others would get to work early to study film and work-out before the sun came up. The challenge was offered by Weddle to get there by 5:30 AM. Inman was scolded for getting there at 6 AM and told by Weddle, “You don’t want to be great”. That’s total bull if you ask me. It’s sad because I actually love Weddle and those guys. But don’t discriminate against others for what time they want to work. What kills me is that Inman is now “praised” for being the first one into Halas Hall. Great, thanks for unlocking the doors. I love that you’re working hard and dedicating yourself to getting better and learning the Bears playbook. But I could care less what time of day you do your work.

If this happened to me, I would invite Weddle, Rivers, and Woodhead to a work-out and film study at 10 or 11 PM and then scold them for not being there or being “tired” during the practice session.

I don’t understand the coaches that have early morning practices. Early morning practices seem to be for those that are out to prove something to their teammates and coaches. You know, kind of like a hazing ritual that old men coaches like to put students through to prove how tough they are. Again, I love your dedication, but can we be dedicated at 7 PM instead? I’d rather prove something in the games, which by the way are never played in the early morning but rather kickoff anywhere between Noon to 7:30 PM central time.

So let’s get over this ill-conceived notion and work smarter, not harder. If you want to go ahead and wake up early, that’s fine. That’s your business. But don’t get a big head over it. Don’t get cocky because you woke up early. You’re the one with a sleeping problem, not me. So just keep doing that. I won’t rip you. Just don’t tell me I’m lazy for waking up later.