Ladies & Gentlemen! Welcome to the 19th annual Butkus League season! Can you believe Reid’s ‘Huskers have never, ever won the Butkus Bowl Championship Trophy? I can’t believe it either. Now 0-7 in Butkus Bowls, the Huskers are aiming to get the monkey off their backs. Two “Real Championships” are nice (the most cumulative points in a season) but it’s time to bring the infamous Butkus Bowl Championship Trophy home to Mundelein, IL. Since purchasing said trophy back in 2001, I’ve hardly even seen it. It’s a fiction of the mind. Does it truly exist? Has it been updated with engravings of Champions and their MVP’s? Given the lack of effort by fellow Butkus Leaguers, the answer is “doubtful”.
So here we are, the dog days of Summer. That means it’s the Dutch Lion’s favorite time of year. That also means it’s time for you to sit back, relax, and strap it down while reading this amazing team preview of “Reid’s Cornhuskers”!
First, let’s recap the previous themes/slogans used to motivate the ‘Huskers each season!
2003: “Full Throttle” – Starting our 5th season, I decided to start with the team slogan idea. This one was inspired by the “Charlie’s Angels” movie if I remember correctly.
2004: “Can You Stand the Rain?” – Butkus Bowl Runner Up – An overriding theme of rain and water has been a prevailing idea throughout the history of team slogans.
2005: “When It Rains…It Pours” – Butkus Bowl Runner Up – Morton salt
2006: “The Impossible Dream” – One of my favorites, inspired by the 1967 Boston Red Sox run to the World Series. One of the greatest sports slogans of all time!
2007: “Shutting Out the Ghost of Autumns Past” – Butkus Bowl Runner Up – I found this one in a baseball encyclopedia when researching the old 50’s Brooklyn Dodgers
2008: “Forget About Next Year” – Butkus Bowl Runner Up – Another play on the Brooklyn Dodgers
2009: “Like a Bolt of Lightning” – Inspired by Nebraska great Heisman Trophy Winner #20 Johnny Rodgers
2010: “Refuse To Lose: The Scoring Explosion” – 2010 Real Champions – Butkus Bowl Runner Up – Inspired twofold by Trev Alberts’ self coined 1993 Nebraska theme and the 1983 Nebraska’s “Triplets” who had a record setting offensive season.
2011: “Unfinished Business” – As you’d guess, we followed that up with 1994 Nebraska’s Championship slogan
2012: “Echoes of the Mind” – A really funny one based on my tough decision to tank the season on purpose in hopes of rebuilding. Taken from an episode of Magnum, P.I., this direction panned out with the 2014 Real Champions team starring Marcus Mariota and Melvin Gordon.
2013: “Forget About Next Year….This IS Next Year” – Yet another play on the Brooklyn Dodgers
2014: “It’s All Over But The Shouting” – 2014 Real Champions – Butkus Bowl Runner Up – One of my Dad’s favorite sayings when the outcome of a game was decided despite time being left on the clock.
2015: “We Shall Never Surrender” – Inspired by Winston Churchill’s famous speech to the Allies in 1940 which ultimately inspired the conquering of the Nazis.
2016: “Not In This Lifetime” – Inspired by the Guns ‘N Roses 2016 world tour reunion after being apart for two decades.
I thought I had another Magnum, P.I. slogan in there somewhere called “Infinity & Jelly Doughnuts” but I can’t recall exactly what year that was used. I’ll need to research that one.
And now announcing this year’s theme……….
2017: “Red Reign…….I’m Only Happy When It Rains“
That’s right! It’s time for the Cornhuskers to bring out the “Red Rain” (inspired by Peter Gabriel) with a play on words inferring the Big Red will reign as champions once again! Adding into this year’s theme is some Garbage, and I’m not talking about trash. I’m referring to the song “I’m Only Happy When It Rains”. This fantasy team is gonna rain down with points this year. It’s gonna be a torrential downpour of points. Watch out for the tsunami of scoring gentlemen! “Red Reign” is gonna get ya!
Here’s my roster as we head into Saturday’s 19th Annual Butkus League Draft:
Quarterbacks 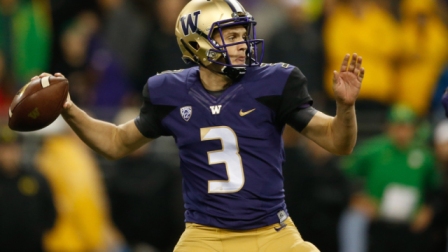 Jake Browning/Washington – Who would have guessed Browning would go out there as a Sophomore and throw 43 Touchdown passes? Not me……so probably not even his father “Easy Ed” Browning. Jake is cool, like his dad, and like the other side of the pillow. Hence his nickname “Easy Ed Jr.”. What’s on tap for Browning this autumn? Who knows! Maybe a Heisman run. Why does Browning seem to get overlooked? As usual, it’s the East Coast bias, the bias against the West Coast (outside of USC), and his small stature. I’m happy he’s only 6-2. Maybe he’ll bypass the NFL to remain at UW for 2019. 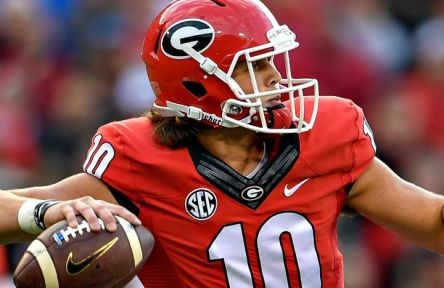 Jacob “Boy Wonder” Eason/Georgia – I’m surprised at the lack of respect that Eason has received. I know he didn’t have an excellent freshman season but how many frosh DO have great statistical years? Not many. Eason threw 16 TD with just 8 INT and led Georgia to an 8-5 record. Sounds a lot like Browning’s freshman season (16-10 ratio leading UW to a 7-6 record). Hmmmm, well that’s interesting. Browning followed that up with a remarkable 43-9 ratio while leading the Huskies to a 12-1 Pac 12 Championship season that ended in the Semifinals with that loss to Alabama. Can we count on Eason improving to 43 TD’s this year? No. But I think we can count on improvement. He’s got the strongest arm in all the land!

Jesse Ertz/Kansas St. – A late trade acquisition from Mike’s Tigers, Ertz steps into the starting role at QB2 for the ‘Huskers. This guy only threw 9 TD passes. That’s the bad news. The good news is he ran for 1,012 yards and 12 rushing scores. Is he a sleeper? I don’t know. He had offseason shoulder surgery. Does that mean he’ll go back to throwing more in ’17, or does it mean he’s not even healthy enough to play? Ertz is a definite question mark. However, I love Senior QB’s, especially for Coach Snyder.

Daniel Jones/Duke – Another unheralded QB with moxie, Jones brings plenty of promise. He’s a possible star under Coach Cutcliffe’s tutelage. Is he good enough? Is his team good enough? Probably. Duke finished 4-8 last year but had 3 consecutive winning seasons prior to ’16. I’m hesitant to have a Duke QB again (I once tried his predecessor Thomas Sirk with mixed results). For now he makes a solid backup QB2.
Running Backs – This is probably the greatest group of RB’s I’ve ever had in 19 years of Butkus League. As our good pal Phil Steele would say, “Given that they are ALL ready to break out, I’ll call this unit……..better.”

Tre Bryant/Nebraska – I’m really excited about this guy, jersey #18. He looks like a solid all around back. Will he split carries with Ozigbo and Mikale Wilbon? Probably, but I like this kid from St. Louis.

Justin “Taco Bell” Crawford/West Virginia – I highly believe in his talent. He’s very, very good and I like his character. He’s got work ethic. He even works at Taco Bell in his free time to provide for his young wife and child. Why did he only score 4 times last year? It’s hard to say. Even Coach Holgorsen wondered. He once said Crawford has just got to finish. Here’s betting he puts up 12-16 scores this year after getting tackled inside the 5 so many times last year. 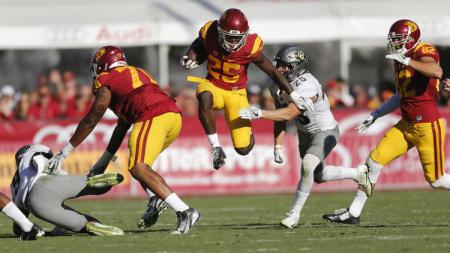 Ronald “RoJo II” Jones/Southern Cal – RoJo is a superstar! It’s funny how I dropped this guy last year after several sub par performances. I was so so lucky to get him back right before he broke out with some serious high quality performances. Darnold for Heisman? How ’bout RoJo!!!! 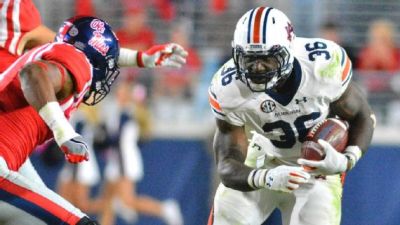 Kamryn “Bubba” Pettway/Auburn – As you may know, I love big backs. This Fullback broke out a la historic big backs “Big Two” Jorvorskie Lane from Texas A&M, “The Tyler Rose” Earl Campbell from Texas, and 300 pounder Joe Hall from Kansas St. Anyone remember that guy? He was a bull. That reminds me of another. How ’bout the “Brahma Bull” Alley Broussard from LSU. “Bubba” is more like another Auburn great from long ago, Rudi Johnson. Rudi was lighter on his feet, though Pettway is a big beast that wears down defenses. “Bubba” had a phenomenal year until he blew a tire late in the season on that long breakaway. Anyone see that? It was seriously funny stuff. No one touched him and then he just keeled over like he had been shot running away from a sniper. What in the name of Marion Motley was that? LOL!

Joe Hall – Kansas St.
L.J. “Lawrence Phillips” Scott/Michigan St. – He runs like the great LP. Scott is oozing with talent. It’s a shame that he arrived at MSU when they started to go in the crapper. If he gets a lot of carries, I’m convinced he will amaze fans and become a big name going into the 2018 NFL Draft. I’m not sure I’ve seen a guy that runs more like LP since those dominant Huskers days in the 90s. Phillips remains one of the greatest talented RB’s in college history.

Lawrence Phillips
Mike Weber “Grill”/Ohio St. – Weber should have gotten more carries last year. You could tell there was just something wrong with the OSU offense. I’m so glad they hired former Indiana coach Kevin Wilson to coordinate OSU in ’17. He does a great job with his running game. I bet he tells J.T. Barrett to stop hogging the ball so much and to hand off more to Weber this Fall. Last year: Barrett 205 carries, Weber 182 carries. This year I expect: Barrett 120 carries, Weber 275 (Saquon Barkley had 272 for comparison’s sake). Barrett for Heisman? How ’bout Weber for Heisman? He averaged 6.0 ypc on those 182. 275 x 6 = 1650 rushing yards. 1650 yards would make me happy. It would also impress Heisman voters. Watch for Mike Weber to “grill” the Butkus League in 2017!

Tavares Martin/Washington St. – Like most of my team, I think Martin is getting no love. He should be getting hype as a main cog of Coach Mike Leach’s “Air Raid” system. Last year Martin had 64 catches, 728 yards, and 7 TD as the 3rd option. Now with Gabe Marks and River Cracraft gone, I could see Martin improving quite a bit on those numbers. Luke Falk is still there and he’ll probably put up another 4,000 plus passing yards. Martin should easily eclipse 1,000 yards and 10 scores. 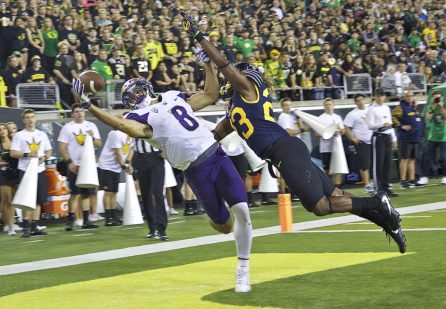 Dante “Gary” Pettis/Washington – Both of my returning wideouts is from the Great Northwest. Ohhhh, beautiful country the Pacific Northwest. Fantastic pass catchers too. Pettis is the son of baseball great Gary Pettis and brother of NFL WR Austin Pettis. Gary’s brother Lynn played baseball too. Lynn was a little strange though, at least in the baseball card as seen below. My buddy Bush and I always wondered about Lynn, all based on one lousy baseball card. I guess Gary was a prankster and grabbed his 16-year-old brother Lynn to pose for this 1985 Topps baseball card. I know what you’re thinking…..maybe we should just tweet Dante and ask about his uncle. Oh well, who cares? Not me. I just enjoy watching Dante catching long balls from Browning and then using that sprinter speed to launch himself to the end zone. I love those Pettis’s! 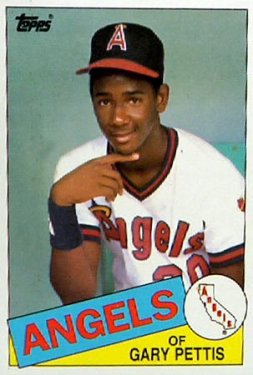 So that’s where we stand heading into the Draft. Start with those twelve superstars, sprinkle in another 12 guys including a tight end, a kicker, and a dominant defense in the draft and we’re looking at a 2017 Butkus League Championship!………Finally. “Red Reign” is back and better than ever.