As most of you know, I’m an alumnus of the University of Illinois. And if you didn’t know, Illini Alumni are huge basketball fans. Needless to say, “We Are Hungry” for a return to glory. I can hear the chants on Green Street now……”WE ARE HUNGRY!”……and I’m not talkin’ ’bout the now-defunct White Horse Inn or Mabel’s or La Bamba’s “Burritos as big as your head”. (Actually, La Bamba’s still exists but they moved away from their “late-night drunk students causing mayhem in Campustown” location.)

When Coach Brad Underwood was hired this past offseason, I wrote about how pumped I was about him and our future. Despite the rough start to this season, I remain completely jazzed up for the Fighting Illini in the coming years. Why? Growing Pains. That’s why……and I’m not talkin’ ’bout Kirk Cameron and Alan Thicke.

I took my son to a game recently at Assembly Hall (now called “State Farm Center”) vs Grand Canyon on December 30. I had not been to a game in Champaign in 20 years! I recall going with my parents to see Illinois face the Michigan St. Spartans on February 15, 1997. They came down to visit me for my Birthday in my last semester before Graduation at the U of I. Illinois won 79-68. For whatever reason, I never made it back to Assembly Hall until this year. I always meant to go but life got in the way. Of course, I probably watched 99% of all the games on television. The renovations are awesome by the way and I highly recommend checking out “The House of ‘Paign”! It’s better than ever.

Anyway, it made me reminisce about the last two decades of Illini basketball. A lot has happened in the last 20 years. From Lon Kruger to Bill Self to Bruce Weber to John Groce and now to Brad Underwood. From Matt Heldman, Kevin Turner, Jerry Hester, and the 1998 Big Ten Champions to Bill Self’s 2001 and 2002 Big Ten Champions Era, to Bruce Weber’s 2004 and 2005 Big Ten Champions Era Starring the “37-2 Real Champs” of Dee Brown, Deron Williams, Luther Head, James Augustine, and Roger Powell, to the disappointing follow-up years of Demetri McCamey, D.J. Richardson, Brandon Paul, and Malcolm Hill, to the present…….well, it’s enough to make your head spin. So let me straighten you out.

#WeWillWin. I believe in this slogan. It’s not quite as cool as “ThrIllinois” was during my mid-1990s tenure but it’ll do. OK, stop getting distracted! So where was I? Oh yeah! The current 2017-18 Fighting Illini team is EERILY similar to the 1998-99 Fighting Illini team. Let me explain.

Going into the 1999 season, Coach Lon Kruger had to replace five seniors that were the starters of the 1998 Big Ten Champs. The departing seniors were Jerry Hester, Jarrod Gee, Kevin Turner, Brian Johnson, and Matt Heldman (God Rest His Soul. Matt died in a car crash near where I live in Libertyville, IL on October 10, 1999. I could go on and on about the legacy of Matt. He was a friend, a guy we all admired, just a great kid, and a hero. But that is a story for another day.)

So you knew going in that the 1999 season would be a rebuilding year. Sure enough, the team started 0-7 in Big Ten play, 8-11 overall. On January 20, 1999 the Illini got crushed at Wisconsin 75-53 for their 6th loss in that streak. Illinois lost one more at home to Penn St. before finally getting in the win column in conference play with a victory at Michigan 61-59 on January 28, 1999. Illinois finished the regular season that year with an 11-17 record overall, 3-13 in the Big Ten. The only victories were at Michigan, vs Wisconsin, and at Northwestern.

Sound familiar? This year’s team had to replace leading scorer Malcolm Hill, Maverick Morgan, Tracy Abrams, Jalen Coleman, Mike Thorne, Jaylon Tate, and D.J. Williams from last year’s 20-15 team. The biggest difference between 19 years ago and now is that Illinois is going through a coaching change this year as well as a roster overhaul whereas back then Coach Lon Kruger was still in charge but with an entirely new roster. However, as you can see the similarities are there. Thus far Illinois is scuffling with an 0-7 record in Big Ten play, 10-10 overall. The record is somewhat misleading as the Illini have lost 3 of those 7 B1G games in Overtime. Also, the team is fighting with many close losses after leading in the 2nd half. However, this last game at Wisconsin was ugly as they lost 75-50. (One day less than 19 years ago it was 75-53. Kinda weird, right?)

This young team is led by JR PF #12 Leron Black. This kid is awesome, or should I say, on the verge of being awesome. His game has really developed over the past year. He has an amazing half-hook. His turnaround fade-away is unstoppable, and he is a hound-dog on defense. He can even shoot from the perimeter. He’ll make a 3 pointer now and again. He’s the best dunker on our team too. The sky is the limit for Black. I’m sure he will be an NBA player after another season with Coach Underwood.

Other than Black, JR #43 Michael Finke, SR #24 Mark Alstork (an incoming grad transfer), and JR #23 Aaron Jordan, the entire rotation consists of youngins. The future consists of three star FR in #1 Trent Frazier, #13 Mark Smith, and #20 Da’Monte Williams. Don’t forget about two more FR with potential in #4 Matic Vesel and #11 Greg Eboigbodin. Throw in a couple of Sophs in #3 Te’Jon Lucas and #2 Kipper Nichols and we have a nice looking group of young ballers that are poised for future success.

The current problems are many but the main issue is the players are getting adjusted to Coach Underwood’s scheme and style. Also, our young players are getting no calls. The foul calls this year have been atrocious. Finally, we get off to rough starts seemingly every game but always (almost always) come back to take a 2nd half lead. Ultimately, we’ve had a hard time finishing the game. We can’t seem to get over the hump and win. But “learning” how to win is half the battle. I’m confident Coach Underwood will teach them how. He’s done it everywhere he’s been so far. Why not here? Why not us? 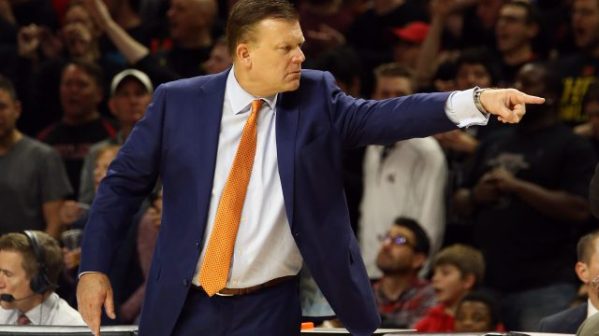 If you went to school in Champaign-Urbana, you remember the bar “C.O. Daniel’s”. It was the place right next to Kam’s. Back in the ’90s, every Tuesday they had a special promotion called “Time Warp Tuesday”. They would play old songs from the 80’s while everybody drank and danced the night away. (“Ooops! I forgot I have an 8am lecture in Foellinger Auditorium on Wednesday morning. Oh well, pour me another!”). In honor of that tradition, let’s do our own Time Warp and go back to 1999, shall we?

The incoming freshmen back then were Robert Archibald, Lucas Johnson, Damir Krupalija, and Frank Williams. Did somebody say “Williams”? Kinda weird. Frank had a son on November 2, 1998 named Da’Monte. Well, just how crazy and ironic is this gonna get? On top of those four freshmen phenoms, Illinois had future stars in redshirt freshman Cory Bradford and sophomore Sergio McClain. I’m counting six first or second year players that were the core of that 1999 team. Under Kruger’s tutelage, they even made a run in the 1999 Big Ten Tournament. They won 3 games in a row vs ranked teams to advance to the B1G Conference Championship game where they finally ran out of gas. They beat #23 Minnesota, #17 Indiana, and #11 Ohio St. before falling to #2 Michigan St. in the Final.

I remember that weekend. It brought so much hope. The hope wasn’t false. Lon Kruger remained one more season, improving the squad from 14-18 to 22-10 overall, 11-5 in the B1G, ranked #21 in 2000. Then Coach Self took over in 2001, leading the Fighting Illini to new heights including the 2001 and 2002 B1G regular season Championships. With Self’s recruits, Coach Weber culminated that incredible Era with the “37-2 Real Champs” season of 2005. Ahhhh, the good ‘ol days.

Only time will tell. And I have a feeling………it’s a TimeWarp kinda feeling, only this time I don’t have to wake up for an 8am lecture in Foellinger Auditorium. Illinois is due. The Fighting Illini will win again. I think Coach Underwood is THE guy to build the program and bring it back where it belongs, at the top of the Big Ten Conference.

It’s just a matter of time.