I love this time of year! One of the things I look forward to most is ESPN’s countdown of last year’s Top 25 College Football games! It’s a great way to relive last season while at the same time getting pumped for this upcoming season. Those of you that know me best know that college football is truly my favorite sport. I love all sports but there is just something a little extra special about college football. It has enthralled me since the mid-80’s….since I watched on Saturday afternoons with my Dad.

ESPN just wrapped up their Top 25 by revealing the top 5 games over the weekend. The fans voted for the Top 5 and it was surprising. Here’s this year’s complete list with my comments:

#20 Michigan 48 at Indiana 41 (2 OT) – I remember thinking Indiana choked but I don’t remember the details.

#19 Nebraska 33 at Miami 36 (OT) – Another Nebraska loss that I couldn’t watch live because of a cousin’s wedding. Looked up the score at the beginning of the reception. Big Red was down 33-10 and I was so downtrodden. Then later heard we lost……in OT. WHAT!?! What in the world happened? A furious comeback to wake up the echoes, that’s what happened! Still lost in OT but 36-33 instead of 33-10 gave me a glimmer of hope.

#17 Michigan St. 38 at Nebraska 39 – Probably my happiest moment of the season. After losing at Purdue 55-45 the week before, I don’t know why I predicted Neb would win this game vs the #6 team in the land but sometimes I feel it deep in my bones. Nebraska wins! Revenge……Victory……Hope……Motivation for ’16…….Thank you Lord.

#16 B1G Championship : Michigan St. 16 vs Iowa 13 – Slobberknocker of a game. Lasting memory?……L.J. Scott bulldozing Iowa throughout the drive but especially on the TD. Beast!

#15 TCU 29 at Oklahoma 30 – Weird game. TCU backup QB’s somehow kept Horned Frogs in the game but Oklahoma squeaked by, won Bedlam the following week, then ended up going to the Playoffs. TCU must be thinking “what COULD have been” with a healthy Trevone Boykin???

#13 BYU 33 at Nebraska 28 – Ugh sauce. I wasn’t even watching this game because I took my son to the Notre Dame opener vs Texas in South Bend. We parked and then I heard the news. I didn’t believe it at first. I normally would let this eat at me for days but I didn’t want to ruin the ND game for my son so I tried to convince myself it didn’t truly happen. I watched the recording the next day upon returning home. We had it…….then we lost it. Spoiler alert! I guess it really did happen.

#10 Miami 30 at Duke 27 – Nuts! Duke got hosed on the kickoff return for TD that featured several horrible calls including missed illegal blocks, missed illegal forward laterals, and missed tackles when a Miami knee was clearly down! What were the refs doing during the 10-15 minute replay review? “After reviewing the play…..check that, we need more time to review it more” What? Did the ref really say that? How did they not see this very clear photo of his knee touching the turf? Oh well, let’s move on the Duke coaches would say. “Not so fast my friends”. Emotion is such a big part of this sport……the next week a good 6-2 Duke team lost at North Carolina 66-31!

#9 TCU 55 at Texas Tech 52 – This game was RAW! I recall almost spitting out dinner at the conclusion of this game. Quadruple bypass ending on that tipped ball caught by Aaron Green! Incredible game! PS I think we ate pork chops. 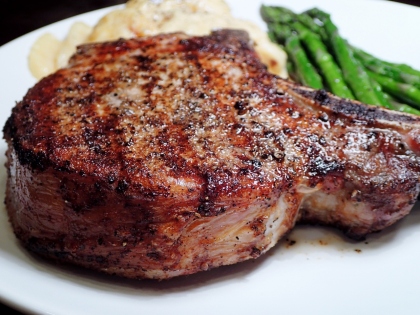 #8 Ole Miss 43 Alabama 37 – It’s always fun to see ‘Bama scuffling and for some reason they almost always lose one game per season, often at home. Sure we all know they’re the best program in all the land, but that’s what makes it so much fun! College football NEEDS a villain. Think of “the Boz”, the “U” at Miami, “SC”, now the Crimson Tide. Does it get better than seeing someone go into Tuscaloosa and pull off the upset? Rarely. 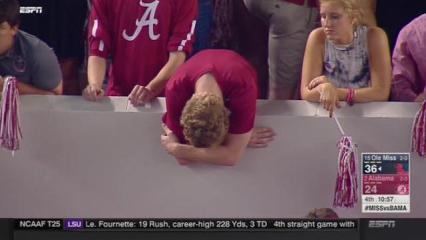 #7 Notre Dame 22 at Clemson 24 – Listened to Don Criqui on the radio on my way back from the Nebraska at Illinois game in Champaign (another close loss for the Big Red, how did they blow this one??? I still don’t think the Illini WR caught that TD pass). Meanwhile, Trev slept in the backseat while I enjoyed the classic voice of all those 80’s Orange Bowls…….”Happy New Year! Tonight you are looking live from a blimp over the city of Miami where we will crown a National Champion in the Orange Bowl here on NBC”.  By the way I hated Bob Trumpy. What a tool!!! 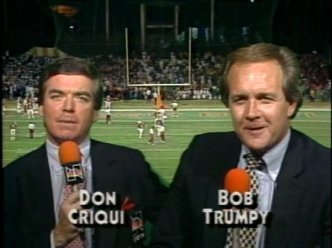 #6 Notre Dame 36 at Stanford 38 – Another 2 point loss for ND. This was how close the Irish were to making the Playoffs. They lost by 2 at #1 Clemson and by 2 at #5 Stanford. Anyone see “A Season with Notre Dame football” on Showtime? Awesome look at a college program from inside the classroom and locker room. You could see how Notre Dame was so close. Without all the injuries, I think they would’ve succeeded in their goal. This year’s “A Season” will be Florida St. beginning on September 6 on Showtime.

#5 Alamo Bowl: Oregon 41 vs TCU 47 (3OT) – This game tied the record for greatest bowl comeback of all-time! Oregon led 31-0 at the break but couldn’t hold the lead, losing 47-41 in 3OT. That Ducks backup center who struggled completing shotgun snaps?…….C’mon man.

#4 National Championship Game: Clemson 40 vs Alabama 45 – Wow! How was this game not #1 or at least #2? These were clearly the top 2 best teams of 2015. The final score was 45-40. It was wild! What were the voters thinking? I guess it was hard to choose #1 versus #2 or even #5 when you had such a great selection of games to choose from. If I had a vote I would pick this as the second best game of the year.

#3 Arkansas 53 @ Ole Miss 52 (OT)- This was extremely wild. If you didn’t watch this game, you’ll be shocked if you see it one day. It was absolutely ridiculous. The lateral on 4th down….insane! Like really? Only in college football do games like this happen. It’s actually hard to even imagine an ending like this. You can’t write this stuff. Trust me.

#2 Michigan St. 27 @ Michigan 23 – Sheer madness! Did this really happen? Games like this are why college football will forever remain my favorite sport. This was probably the 2015 Game of the Year. Did you see the ending of this game? If not, do yourself a favor and watch it. PS My Stevenson buddy Matt Morrissey #10 was involved on the punt block. He’s one of the guys tackling Michigan punter Blake O’Neill. Matt is such a good kid going into his Sophomore season and I’m proud of him for already being involved in a historic play that will live on in college football lore.

#1 Florida St. 16 @ Georgia Tech 22 – How is this game the best game of 2015? I don’t think it should be, but there was some cool stuff nonetheless. The game was tied when FSU lined up for a game winning FG attempt that was blocked and returned ALL…..THE……WAY…….by GTech’s Lance Austin! Very cool, but NOT the best game of 2015.

So there you have it. An amazing season. I wonder what Phil Steele thought of all these games? Hey Phil, do you like pork chops? Next time my wife cooks up the pork you’ll be invited.