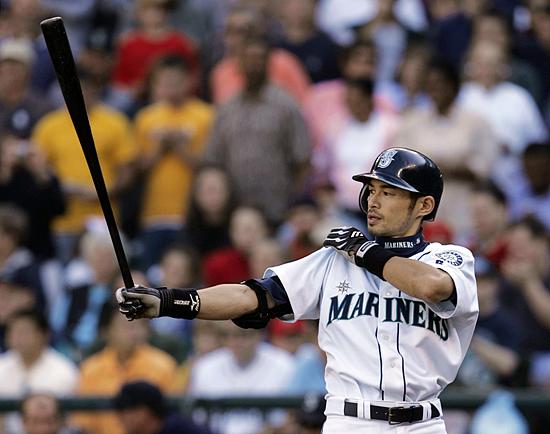 I love Ichiro. When he first arrived in the States way back in 2001, he was a revelation. How are the Seattle Mariners dominating when they just recently let go of Alex Rodriguez, Ken Griffey Jr., and Randy Johnson? I tuned in to find out how the Mariners were winning so much. When I first saw Ichiro my thought was “Wow, this guy is different”. As Americans we hadn’t really seen a guy play with his style and grace. We didn’t know what the Japanese style was or why it worked. The more I watched the more I realized this guy was indeed special…..the throws, the catches, the speed, that batting stance, that…….grace. Ichiro is one of the all-timers.

The other day Ichiro smashed his 3000th hit. He is just the 30th player in major league history to record that many hits. You probably knew all that, but did you know he didn’t even cross the Pacific Ocean until he was 27 years old? He had already played 9 years in Japan, recording 1,278 hits. So he started over here in 2001 and age 27…..and he earned 3000 hits. Think about that! He had to average about 200 hits per year for 15 years from age 27 to 42! Do you understand how insane that sounds? 200 hits is usually the league leader, and Suzuki had to do that…..for 15 years…..as an old guy. Most guys hit their peak at age 27, but the ones that normally get to 3000 hits have probably 1,000 hits already in the bag. For example, fellow “3000 Hit Club” member Derek Jeter had 1008 hits before he turned 27 and just recently retired with 3,465 career hits. Pete Rose had 899 by age 27. Ichiro’s like “Hey, I’ll give you guys a head start and we’ll see what happens”.

Ichiro gets criticized for his lack of power. Yet his batting practices were legendary. I read that he once hit eight consecutive Home Runs in BP after somebody called him out to hit for more power. So he COULD hit HR but that wasn’t his game. That wasn’t his style. Ichiro’s style was speed, getting on base, turning singles into doubles with stolen bases, then scoring. Don’t forget he has 507 Stolen Bases in his career. For some reason that gets lost in the numbers because the prevailing thought about Suzuki was his hitting, and rightfully so. He hit over .350 four times in his 16 seasons. 4 times over .350? Are you kidding me? That’s nuts! Ichiro was like a boxer practicing in the gym…..HIT, HIT, HIT, HIT, HIT, HIT….HIT again, over and over and over. Before you know it, that’s 3000 Major League Baseball hits. Throw in his 1,278 hits in Japan and that’s 4,278 baseball hits. Pete Rose had 4,256 hits. By the way, Pete Rose had 3,357 hits from his age 27 season on. Ichiro is 2nd all time with his 3,000 and counting. I don’t want to get into the Japan’s Nippon vs the USA’s MLB debate. I don’t care. What does it really matter? Whether you love and respect Japan’s Nippon Professional Baseball League or you find it totally worthless, either way we can agree that Ichiro has done something amazing. His baseball life is an outstanding achievement.

So how did he do it? First, he’s in excellent shape. Have we ever seen a guy stretch as much as Ichiro? The only guy with better flexibility that I can think of is Bruce Lee. I’m simply amazed at his stretching. Take a look now before he retires. The guy is constantly stretching. I believe this is one of the most underrated aspects of avoiding injuries. The body needs to be used to being in weird positions or else it snaps, breaks, or tears. So why not put your bones, tendons, muscles, and ligaments through these stretches so that if and when it happens someday they will be ready? Flexibility….ingenious. Here in America we tend to value muscles and strength more than speed and flexibility. Maybe we should change our way of thinking.