Inspired by Bill Simmons’ tweet the other day about his top 10 New England Patriots of all-time, I decided to write a quick column of my own. We’re here to briefly list our top ten Chicago Bears ever, along with a short list of “Honorable Mentions”. This is not a list of the 10 “Greatest” Bears ever. It’s simply a list of my 10 “Favorite” Bears ever. Enjoy!

#10 Gary Fencik/S/Jersey #45 – “It’s Gary here, and I’m Mr. Clean. They call me Hitman, don’t know what they mean. They throw it long and watch me run, I’m on my man one-on-one. Buddy’s guys cover it down to the bone, that’s why they call it the 46 zone……” The best thing about Gary, other than his Super Bowl Shuffle……. and the fact that he’s a GQ dresser………. and a graduate of Yale…….. and a Super Bear as well as a super gentleman……… was that Gary wrote the famous letter on behalf of the Bears defense addressed to Mr. George Halas requesting that he not fire their Defensive Coordinator Buddy Ryan despite the defense’s inconsistent play of the early 1980’s. Fencik, along with his young Bears teammates, thought so highly of Buddy that they composed a letter to give to Papa Bear so that he wouldn’t fire Ryan. Everyone on the soon-to-be “Monsters” defense signed the letter. Halas respected the players wishes. Then, Halas decreed that new HC Mike Ditka must keep Ryan on staff as DC. The rest is history. 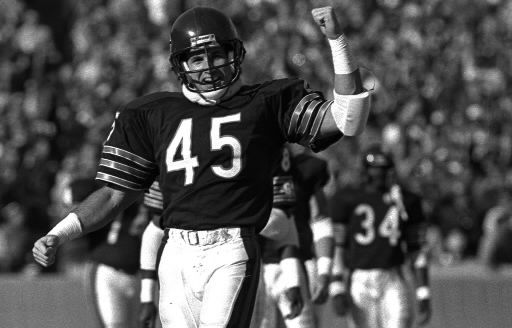 #9 Jim McMahon/QB/#9 – One of the game’s all time characters, Jim McMahon was also an underrated quarterback. #9 Jimmy Mac led the Bears to five straight NFC Central Division Championships from 1984-’88 and to a spot in 3 NFC Championships (’84, ’85, and ’88) along with his Super Bowl XX World Championship. Sure McMahon was outlandish. He was almost always injured. Back in those days you could crush quarterbacks with no repercussions. To top it off, how many concussions did Jim give to himself from all those headbutts with his offensive teammates? One of the biggest travesties ever was when Packers DL Charles Martin slammed McMahon into the frozen turf right on McMahon’s throwing shoulder, thus effectively ending the Bears repeat hopes in ’86. It’s sad. Jim, and the Bears, were never quite the same again.

#8 Roquan Smith/LB/#58 – Roquan was easily the best player I saw in college during the 2017 season. I wrote about him several times as I studied the Georgia Bulldogs defense, led by an unstoppable middle linebacker, #3 Roquan Smith. When the Bears drafted Smith at #8 overall in the 2018 NFL Draft, I was ecstatic! #58 had a great rookie season for the young and outstanding Chicago defense. As a rookie, he was really good, leading the Bears in total tackles. Moving forward, I have even higher hopes for Roquan. I feel he will improve with a full offseason and training camp prior to his second season in ’19. Looking down the road, I see Roquan improving to All-Pro levels as an ILB in the Bears 3-4 next to fellow ILB #59 Danny Trevathan. Someday, Danny will be gone and the new leader of this Bears defense will be Roquan. Along with stud pass rushers Khalil Mack and Leonard Floyd, Smith will lead this defense to new heights which will eventually earn him a spot in Canton. That’s right guys. Roquan will be a Hall of Famer (along with Mack). As another Georgian would say, “You can put it on the board.” 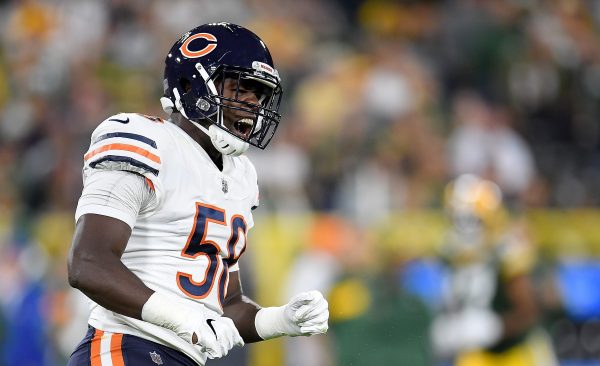 #7 Neal Anderson/RB/#35 – When Walter Payton retired in 1987, most Bears fans yearned for another RB to take his place. Well, those were mighty big shoes to fill. Neal Anderson was drafted in 1986, the first pick after the Super Bowl XX victory. He backed up Walter for his first two years and then when Payton retired, Neal stepped in as the starter. I always loved Neal and felt he was a bit underrated given his status as the heir apparent to Payton. Anderson had three straight 1000 yard seasons from 1988-’90. Some of his runs were incredible during that 3 year stretch. His career long was 80 yards in ’88, which was, believe it or not, longer than Walter’s career long of 76 yards. 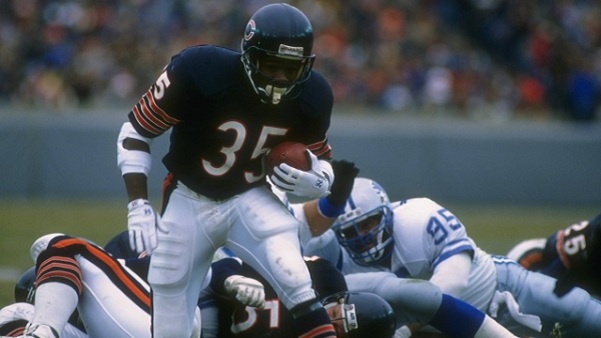 OK, now we’re in the All Time Legends territory of our list. If you don’t like these Top 6 players, you probably aren’t a true, dyed in the wool Chicago Bears fan.

#6 Mike Ditka/TE/#89 – Most people remember Mike Ditka as Head Coach from 1982-’92, and rightfully so as ‘Da Coach was impressive with six division titles, seven playoff appearances, and a 106-62 record over his eleven seasons, not to mention his Super Bowl Championship. One of my favorite stories and quotes comes from Coach when he approached the players in his initial meeting with the team in ’82. To paraphrase, he said, “I don’t know who will be here when we go to the Super Bowl, but I know I’m going. Some of you are going and some of you aren’t. So either get on the train or not, but we’re gonna be Super Bowl Champions and I’ll be the coach when we do.” Talk about a motivator, Coach Ditka was one of the best. As for his playing days, Mike Ditka was a great receiving Tight End. Ever seen Ditka’s highlights? Very impressive. He simply plowed over defenders, the way a Rob Gronkowski does in the modern era. Ditka was so fantastic he became the first TE elected to the Hall of Fame in 1988. And as a coach….. Ditka was super.

#5 Dick Butkus/LB/#51 – What needs to be said about Dick Butkus? First of all, a great name: Richard Marvin Butkus. Secondly, he’s from Chicago. He went to CVS High School, then the University of Illinois. He was drafted by the Bears and played his entire career in Chicago. If you need a reminder of Dick’s dominance, pop in the tape or look it up on Youtube. Butkus was not only a great player, but he did it with passion. He intercepted a lot more passes than you might think (22). He was great in coverage as well as a run-stuffer. Best thing about Butkus? He absolutely mauled ball carriers. Again, watch the tape. Butkus literally mauled guys like a real bear would in the forest. He grabbed guys around the neck and ferociously wrestled them to the ground. Impressive. Fun to watch. Dominant. Awesome. 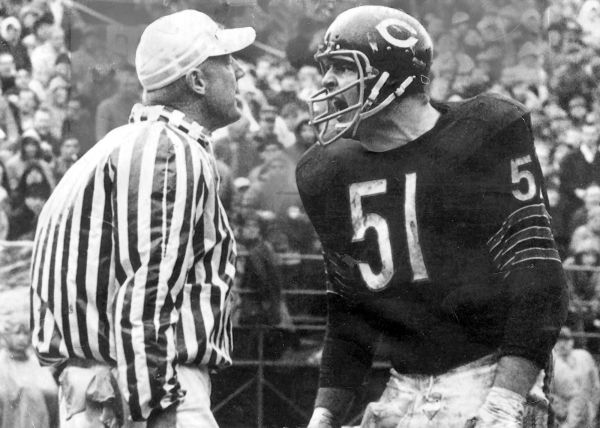 #4 Brian Urlacher/LB/#54 – Like the great middle linebackers before him, Brian Urlacher was drafted to bring back the toughness and greatness as the leader and playcaller of the “Monsters of the Midway”. Sure enough, Brian lived up to his expectations. To this day, I have never seen a linebacker run as fast as Brian did. From sideline to sideline, he was the best. One time, I believe it was in 2002 at Memorial Stadium in Champaign, I saw Brian make such a tremendous play that it left no doubt he would become a Hall of Famer. Right after it happened, I had to rewind the tape (not sure we had a DVR yet but I probably was taping it on a VHS tape) and watch it agin. Brian shed blockers, ran through them and over them, and made an incredible dive over more blockers to bring down the ball-carrier. It was one of those “oh my gosh” moments in a career filled with them. If you didn’t enjoy watching Urlacher’s career, you probably weren’t a “real” Bears fan. Now he’s in the HOF, as predicted.

#3 Dan Hampton/DT/DE/#99 – Nicknamed “Danimal”, Dan Hampton was probably the most underrated force of the dominant 1980’s Bears defenses, including the most influential defense ever, the ’85 Bears. Hamp was a huge man. Playing at 6’5″ and 264 pounds in the 80’s was a lot bigger than that might sound to us now as we watch the modern game. Comparatively, 265 pounds back then was the equivalent of at least 290 or 300 pounds now. The fact that he was agile and could play all spots on the D-Line with massive strength gave you a clue as to how terrific he was. Many other Bears claimed more headlines because there were so many characters in that era. Think William “Refrigerator” Perry, Mike Singletary, Richard Dent, Steve “Mongo” McMichael, Otis Wilson, and Wilber Marshall, not to mention DC Buddy Ryan as characters that garnered more fame in ’85. Nonetheless, when you study the tape you’ll see that #99 was the force to be reckoned with that drove the defense to unimaginable heights. Having said all that, not only was Hampton a Hall of Fame player but to the “Dutch Lion’s” family, he was much more than that too. Coming soon will be a Tribute to Dan Hampton, profiling the Dutch Lion’s personal relationship with Mr. Hampton and his wife. Look for this special article coming soon!

#2 Mike Brown/SS/#30 – Long before he was drafted by the Bears in the 2nd round of the 2000 NFL Draft, Brown was one of my all-time favorite players at Nebraska. As a Huskers fan, it was a dream when Chicago took Brown one round after selecting Brian Urlacher. Within two draft picks, my enthusiasm for the Bears heightened to astronomical levels. I knew that one day we would look back on that day as a signature moment. Sure enough, after Lovie Smith took over and guided his team to Super Bowl 41, it was another dream realized. Sadly, Brown was hurt and unable to participate in the Super Bowl. I know that it scarred him for life and I feel the same pain and anguish. Does Chicago win that Super Bowl over Peyton Manning with a healthy Mike Brown? We’ll never know, but perhaps they could have won. Do you remember the blown coverage on Reggie Wayne’s 53 yard TD to turn the game in the Colts favor? I’d be willing to bet that if Brown was in there instead of his replacement #38 Danieal Manning, that TD pass would have never happened. Would a healthy Michael Brown have been enough? With all of Brown’s big plays over the years, he might have been the difference in a twelve point Bears loss to Indianapolis, 29-17. Maybe. It’s so very sad that we’ll never know. Nonetheless, Mike Brown remains one of my all time favorite football players.

#1 Walter Payton/RB/#34 – “Sweetness” was truly that. Walter was as sweet as sugar. Payton retired in 1987 so if you’ve forgotten how special he really was, then pop in some video and you’ll be astounded. There’s a reason why many modern NFL players still say Walter was their favorite player ever. Just watch the tape. They did, and they saw the same things that we were lucky enough to see for 13 seasons. Payton was a remarkable athlete. It’s hard to put into words what he gave to Bears fans and the entire city of Chicago for that matter. Toughness? Yeah, Walter was the epitome. He only missed one game in his entire 13 year career at RB. Think about that for a minute. Only one word can most accurately describe Walter. He was…… “Sweetness”.

So there you have it…….. the “Dutch Lion’s” favorite Chicago Bears ever. I hope we didn’t forget anyone but I’m sure we did. Maybe a “Link” Lyman or a “Bulldog” Turner deserve some accolades too. Who else? Honestly, it’s difficult to write this list because there are innumerable players to consider.

Who are your favorites? Who do you like? Who do you hate? Tell me I’m nuts….. I enjoy the criticism.