In case you haven’t heard, we’ve been in the process and have now finished the World Cup Qualifying Stage. It’s a process where international soccer teams play a series of 10 qualifying matches to see which nations get to qualify to be a part of soccer’s 2018 World Cup to be held in Russia. And in the eyes of many, it’s been a complete disaster. Recently they completed the next step which was the group draw in which they announced the 8 groups of 4 teams each that will play in Russia’s 2018 World Cup.

First let me ‘qualify’ myself by saying that I’m not a huge soccer guy. Never have been. However, over the last 7-8 years I’ve advanced my knowledge of the sport and put time into following the international game. I still don’t care much for all of the professional leagues. However, I absolutely LOVE watching the World Cup every four years. It’s kinda like the Olympics. How many of you watch the Goodwill Games, the Pan-American Games, or any of those preliminary events on the way to the Olympics? Not many. However, you LOVE watching the Summer and Winter Olympics every four years. Right! The world’s best are on stage and representing their countries in a fantastic event. It’s the same with World Cup soccer.

For me, and the “Dutch Lion”, that means cheering for the Netherlands. I take great pride in my Dutch heritage. My son and I have really gotten interested since the Dutch national team advanced all the way to the 2010 World Cup Final in South Africa. Losing to Spain in extra time only spurred our interest. Then in 2014 the Dutch once again overcame the odds and the haters to advance to the semifinals where we lost to Argentina down in Brazil. After kicking Brazil’s ass in the 3rd Place game, the Dutch finished with a Runner Up and a 3rd Place Trophy in the last two World Cups. That’s incredible!….and worthy of worldwide respect.

Yet the media seem to rip the Dutch team, KNVB, constantly and consistently for some reason. It feels like that typical modern media with their hot takes and stewing the pot. From my perspective, the European media are even worse than the American media. I watch these ESPN FC videos sometimes and they are so disrespectful to the Dutch it’s comical. Here’s a typical commentary, usually in some odd British accent, about Holland’s national team: “They’ve got no talent”. “Their system is broken”. “The Dutch coaches have no clue”. “The Dutch suck!”

It’s gotten me even more fired up! C’mon man! The Dutch are historically one of the best teams in the world and don’t seem to get the respect they are due.

Having said that, the Dutch team has struggled the past few years as they need to replace the older, aging superstars such as Wesley Sneijder (possibly my all-time favorite), Robin van Persie, and Arjen Robben (incredibly underrated, one of the best players in the world in both the ’10 and ’14 World Cups, reminiscent of all-time Dutch great Johan Cruyff). The Dutch national team needs to develop the younger players that have little to no experience on the world stage. It’s cyclical. Peaks and valleys. Trust me, the Dutch will be back.

So now to the point of World Cup Qualifying……..I think this system is broken. Here’s what I see……

The Qualifying Groups are not fair. The best teams are not advancing to the World Cup. The set-up is biased. Some of the qualifying regions have too many good teams, like in Europe and South America. That’s why Chile, Italy, and the Netherlands got screwed. It’s similar to college football or basketball conferences being much stronger than other leagues and so certain teams don’t advance to bowls or the NCAA March Madness Tournament. But that’s an article for another day.

Talk about a broken system? THIS system is broken. 32 teams qualified. But look at the teams that did NOT qualify for 2018 Russia, despite being ranked in the top 32, according to the FIFA Men’s World Rankings as of 10/16/2017:

Instead, the following teams DID qualify:

Nothing against these countries, but if you’re not ranked in the top 32, why are you playing for the most valuable Trophy in worldwide sports, the World Cup? Not that everything revolves around the FIFA rankings in October, but the point is why is there such a discrepancy? Should we take out those 10 teams that qualified despite a lower FIFA ranking? Not necessarily, but…….

“Dutch Lion’s” suggestion would be to grant 5 “wild cards” that should replace the 5 lowest-ranked entries (except for Russia which gets automatic entry because they are the hosts). This makes sense or else you wouldn’t have local interest generated by their team being allowed to play.

Don’t even get me started about the Group draws that were just announced! 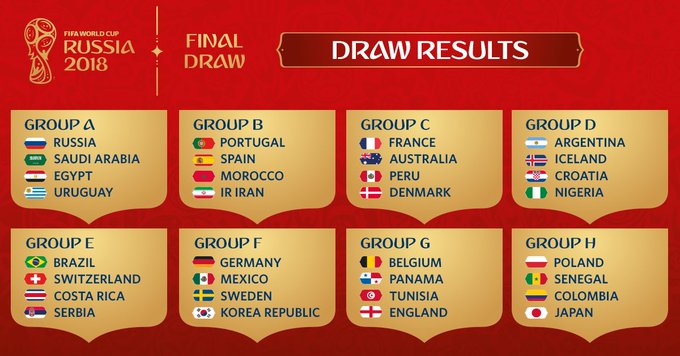 Holland was one of three teams ranked higher in their QUALIFICATION ROUND (France 7th and Sweden 25th, with only two teams maximum advancing to Russia) than Russia’s 2nd highest ranked team in their World Cup group! In other words, there are 3 crappy teams in Russia’s group with a decent Uruguay squad (highest-ranked at 17th). What a joke!

The Dutch would defeat at least half of this 32 country World Cup field but won’t have the chance because their Qualifying group (Europe Group A) consisted of France (7th), Netherlands (20th), Sweden (25th), Bulgaria (36th), Belarus (91st), and Luxembourg (93rd). Meanwhile, some of these countries didn’t have to face very tough competition to qualify. Take Europe Group B. They had two great teams in Portugal (3rd) and Switzerland (11th) but there was no good challenger for either Portugal or Switzerland. The 3rd best country was Hungary (53rd). That’s just one example. If we were to analyze every qualifying group you’d be reading all day. Trust me……the Dutch were hosed royally!!!
“The Dutch Lion” isn’t happy. Oh well. Now we just have to wait for Euro 2020 and World Cup 2022. We’ll live……and we’ll be back. The Lion’s roar will return! Bank on it! Also bank on the USA making a strong run in future years with Christian Pulisic leading the way. U-S-A! U-S-A!
What do you soccer gurus think of all this? Is the “Dutch Lion” out of his mind? Does he know what he’s talking about? One thing I know I need is more “Howler: A Magazine About Soccer”. What a fantastic publication!

Give me your thoughts and comments……please.