The Chicago Bears went into New York and surprisingly held a 10 point lead (16-6) over the New York Giants in the 2nd quarter. From there it went all downhill as the Giants overcame their early struggles and pasted the Bears 16-0 the rest of the way. Final score: Giants 22 Bears 16. The weird score was courtesy of 3 missed extra points. So this game was more like the 24-17 variety that you are used to. Bears cast-off Robbie Gould missed 2 PAT’s for the Giants, while #4 Connor Barth missed 1 PAT for Chicago on a windy day at MetLife Stadium.

This Bears team is so weird. They are now 2-8 but they seem to have an overconfidence about them. Last Wednesday #92 Pernell McPhee provided chalkboard material for New York as he taunted the Giants offensive line saying the Bears would “tear their *** up” and sack QB Eli Manning. So what happened? The Bears pass rush was completely stifled, finishing with zero sacks. Last week the Bears were so overconfident heading into their game at Tampa Bay that they spoke of being a great 2-6 team that saw no reason why they couldn’t “run the table” and win out, going 10-6 and winning the NFC North. These Bears are delusional. They just may run the table alright…..they might LOSE all remaining games, going 2-14 and “earning” a top 3 overall pick in April’s NFL Draft.

All kidding aside, these Bears have so many problems right now. They have some talented players but too many are injured, too many are young and inexperienced, and not enough motivation remains from a team perspective to see many more victories on the horizon. Individual players may remain focused on improving, “selling” themselves to coaches and management, but will they “sell out” for each other to achieve winning as a team?

Now that TE #86 Zach Miller is out for the season with a broken foot suffered in the Giants game, these Bears are so banged up it’s laughable, though not many people are laughing except upcoming Bears opponents. Other Bears injured on Sunday were pass rushing extraordinaire OLB #94 Leonard Floyd (injured when he had his head down and rammed it into gigantic teammate DE #96 Akiem Hicks on a gang tackle, putting Floyd on a stretcher for precautionary reasons), CB #22 Cre’Von LeBlanc (concussion), and LG #71 Josh Sitton (ankle). To recap all the injuries and suspensions, there are now 3 linemen (Sitton, RG #75 Kyle Long, and RT #70 Bobby Massie), 2 receivers (#13 Kevin White, #17 Alshon Jeffery), and 1 tight end (Miller) all out for Chicago. That’s 6 of 11 offensive starters unavailable. On defense the only injuries are Floyd, DT #91 Eddie Goldman (reinjured his ankle last week at Tampa so he has now missed 7 of the last 8 games), LeBlanc, DE #98 Mitch Unrein, maybe DT #93 Will Sutton, throw in #99 Lamarr Houston (that’s another 6 on defense)…….all teams have injuries but with a young rebuilding team you can hardly blame the coaches for this mess. The truth is the Bears need to acquire more talent, get these players to earn more experience in this system as well as the NFL in general, and of course catch a couple of breaks.

#26 Deon Bush – Rookie S Deon Bush came into this game with just two tackles on the season, but he earned his first career start and did well. He was credited with 7 total tackles (3 solo, 4 assisted) while playing most of the game in place of #29 Harold Jones-Quartey who was likely benched for his poor performance last week at Tampa Bay.

#81 Cameron Meredith – In our Preview we named Meredith as our player to “Keep An Eye On”. He lived up to our expectations, catching all 4 targeted passes thrown his way for 49 yards. This kid shows promise. Watch him continue to earn Cutler’s trust over these last 6 games of 2016. He could have a big future with this team as one of the two main WR’s along with Kevin White. He’s 6’3″, jumps high (39 inch vertical), and runs the 40 in 4.42 seconds. From all accounts he has a solid work ethic and has had a lifetime goal of achieving NFL stardom. With this opportunity, he’s well on his way. 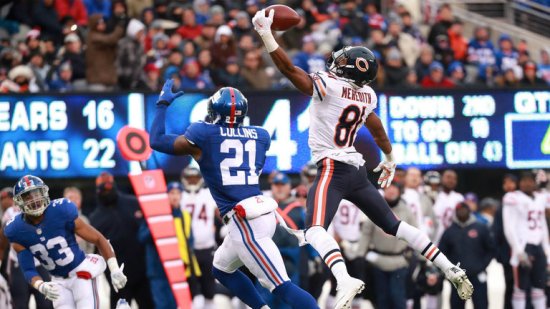 #6 Jay Cutler – I know what you’re thinking…….Cutler gets a game ball???? I agree this is surprising but I actually think Cutler played pretty well considering all the factors facing him and this Bears offense. The injuries, the wind, and the negative energy in a road environment for a depleted 2-7 team put Cutler “up against it” on Sunday. So how did he respond? Cutler bounced back from last week’s awful outing in Tampa by completing 17 of 30 passes for 252 yards with 1 TD and 1 INT. He got this team moving in the 1st half and gave them a chance until all the injuries caught up to them. I was worried for Cutler’s safety in the 2nd half as the Giants reared back and took advantage of at least 3 new players on the line out of 5. By the 4th quarter you could see the lack of experience and cohesion as new RT #76 Mike Adams, new LG #64 Eric Kush, and new RG #62 Ted Larsen tried to gel with LT #72 Charles Leno and C #65 Cody Whitehair to protect Cutler and his backfield mates but they simply couldn’t get the job done. New York had 4 sacks for the game (all in the 4th quarter). Also, how about the dropped passes? I can remember at least two off the top of my head, the main one coming with 3:40 left on the clock on a key 3rd and 7 play. Cutler did a nice job moving around to buy time and found an open Jordan Howard on the right sideline. Howard couldn’t corral it, thus ending another important drive. Finally, with 3 minutes left the Bears had a 1st and 10 at their own 22. It was one last chance to win this game. Cutler faced a 6 man pressure blitz, he lobbed a perfect ball down the right sideline to recently activated WR #10 Marquess Wilson. Wilson caught the ball after he burned Giants rookie CB Eli Apple, but THEN it seemed he didn’t try very hard to stay in bounds on what could have been a 78 yard go-ahead TD! Apple shoved him out of bounds but only after Wilson seemed to veer outside toward the sideline, almost like he was just happy to catch a pass and make a big play. However, he needs to be hungrier there. He needed to fight to score! Veterans understand the difference. What do you think Giants superstar WR Odell Beckham would’ve done there? I know what he would’ve done…..he would’ve scored a huge highlight TD! Young, inexperienced players get too excited in those big moments. Having said that, Cutler played well, he just didn’t have enough surrounding help……as usual. I dogged on Cutler last week but today I need to give him credit and I need to give him a Game Ball.

Player of the Game:

#86 Zach Miller – Prior to his injury, Miller was a difference maker at TE. He caught 3 balls for 61 yards and a touchdown. His long reception down the seam for 34 yards was something seen too little by Bears fans since Greg Olsen was stupidly traded to Carolina a few years ago because then-Offensive Coordinator Mike Martz had no use for Tight Ends. One year later Martz was gone, Olsen became a Pro Bowl TE for the Panthers, and the Bears were left with…..bitter memories. Back to Miller, he’s “The Future” at Tight End but that future is being put on hold now that he has been declared out for the season with a broken foot. “The Future” returns in 2017.

In Thursday’s Preview I predicted: