I had a gut feeling that Sunday’s Chicago Bears game in the Meadowlands against the New York Giants would not go well. Sure enough, on the second play QB #4 Chase Daniel threw a pick-six to Giants LB Alec Ogletree which confirmed my suspicions.

Overall, the Bears didn’t play very well at all in New York yet they still almost came out with a victory before falling in overtime 30-27. Most Bears fans were comfortable with Daniel starting at QB once again for the sore-shouldered QB #10 Mitch Trubisky, who sat out for the second game in a row. After throwing 2 interceptions, fumbling 4 times, and getting sacked 5 times, most (perhaps all?) Bears fans can’t wait to see Trubisky back in there under center for Sunday night’s huge NFC tilt at Soldier Field vs the Los Angeles Rams.

To recap the Bears (8-4) tough, dramatic loss to the Giants (4-8), let’s award some Game Balls and our Player of the Game. Hold up a second. It just hit me. Chicago just played the N.Y. Giants and now host the L.A. Rams. Is this 1985 all over again? You betcha!

OLB #52 Khalil Mack – Filling up the box score is typical for Mack. You might even say easy. Not that tons of hard work hasn’t gone into it, but when Mack is healthy he puts up stats every week. In the Giants game, Mack “Truck” had 5 TKL’s including 4 solo stops, 1 TFL, 1 Sack, 2 QB hits, and 1 PBU. Important to note is that Mack didn’t play a perfect game either, as I noticed he missed a Giants TE in coverage one time by misreading a play. I view this as further proof that the Bears as a whole were just a little bit off on Sunday. Was it the long post-Thanksgiving layoff? Was it just a tough road environment? Were the Bears overconfident and possibly overlooking an underachieving Giants team? I’m not sure but Khalil Mack deserves a Game Ball nonetheless.

ILB #59 Danny Trevathan – Trevathan has often been overlooked on this excellent Bears defense because of the accolades given to Mack, OLB #94 Leonard Floyd, DE #96 Akiem Hicks, DT #91 Eddie Goldman, and even the rookie, fellow ILB #58 Roquan Smith. Danny is consistent and probably the leader of this Bears defensive unit. Like most middle linebackers, Trevathan huddles the team and relays the play calls from DC Vic Fangio. Don’t forget Danny was a member of the Super Bowl Champion Denver Broncos prior to Chicago. Trevathan is a winner. Expect him to get more accolades as the season winds down as he leads the Bears to an NFC Playoffs appearance.

RB #29 Tarik Cohen – Tarik Cohen played an incredible game on Sunday. He filled up the box score with 8 carries for 30 yards and 12 catches for 156 yards on 14 targets. That’s a total of 20 touches for a mini dude that needs to get his hands on the ball at least 10 times a game and hopefully upwards of 15 or 20. But wait…..there was one more touch! Cohen threw the game-tying touchdown pass to WR #17 Anthony Miller with no time remaining in regulation to send the game to OT. Not a bad day for Tarik. He gets our Player of the Game Award! 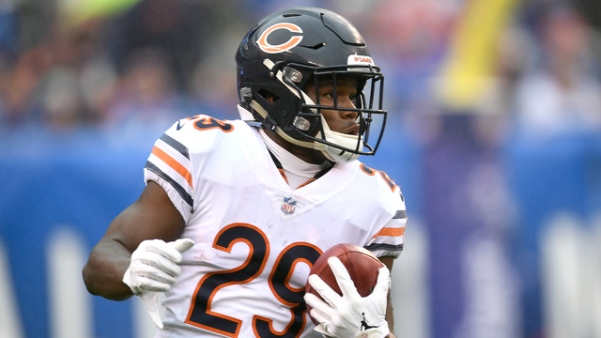 “Chicago is favored by 3.5 points according to Saturday’s Chicago Tribune. I’m worried for the shoe to drop for the second week in a row. The Bears have won five games in a row. When will it end? You’d think without Trubisky that it could be over. Nonetheless, I’ll take the Bears in a close one but won’t be surprised if the streak ends.

This week, the Chicago Bears (8-4) face their toughest matchup of the season, at least on paper. The Los Angeles Rams (11-1) fly to Chicago to battle the Bears on Sunday Night Football. Let’s see how Troy Aikman has the Bears and Rams ranked through Week 13 in his highly acclaimed Aikman Efficiency Ratings(AER).

Chicago has a slight overall edge, except in wins and losses. The Rams have the 3rd best offense in the NFL while the Bears #1 defense promises an epic matchup on that side of the ball.

Meanwhile, when Chicago possesses the ball, we have two often mediocre units facing each other. Obviously a big factor in this game will be whether or not Trubisky is healthy enough to start and perform adequately despite his sore shoulder. Should he not be able to go, after watching Chase Daniel on Sunday, I’d be worried that the Bears will not be able to keep up on the scoreboard.

Can the Bears average Offensive Line, without RG #75 Kyle Long, hold the front against one of the top Defensive Lines in football? DT #93 Ndamukong Suh, DT #99 Aaron Donald, and DT #90 Michael Brockers could make it tough on Trubisky and/or Daniel. Donald already has 16.5 sacks on the year! Good God! Suh has 3.5 sacks. LB #58 Cory Littleton has 4 sacks. LB #50 Sam Ebukam has 3 more sacks. Add them all up and L.A. has 33 sacks, which ties for 12th in the NFL. How many do the Bears have? 37 sacks, tied for 5th. (Are you curious who leads? Pittsburgh has 41 sacks to lead the NFL.)

Of course, you’d think with those superstars that LA’s defense would rank higher than 23rd in the league, according to AER. Speaking of great superstars on defense, remember those ’85 Bears? Remember who they beat in the NFC Championship? You think Al Michaels will bring it up on Sunday Night?

L.A. is favored by 3 points according to Thursday’s Chicago Tribune. This game could go either way. It’s a big primetime affair on NBC’s Sunday Night Football. The lights will be shining bright and it will probably feel like Playoff football. Bottom line, can this vaunted Bears defense stop the incredible Rams offense starring phenom QB #16 Jared Goff, RB #30 Todd Gurley, and the incredible passing game installed by Rams Head Coach Sean McVay? The Rams average over 34 points per game!

As they say, I don’t expect the Bears to completely stop this offense. I only hope they can contain it. The Bears offense will need to score a bunch of points to win this game. I would think Chicago needs to score a minimum of 24 points to win and maybe even 30, 35, or 38 points for victory.

Sunday’s first priority is “Pray for Mitchell” and then next you should enjoy watching this huge game on the Lake Michigan lakefront on Sunday Night Football!