Coach John Fox enters his second season with the Chicago Bears on Thursday night looking to improve on his 2015 debut. The second season has been a charming one for Coach Fox at his previous stops in Carolina and Denver, guiding them both to major improvement from his first season. In 2003, the Carolina Panthers not only improved from 7-9 to 11-5 in the regular season but also won the NFC before falling to New England in Super Bowl XXXVIII (38) 32-29. Remember Jake Delhomme? Remember the Alamo? Then in Coach Fox’s next life in Denver he led the Broncos from 8-8 in his debut season of 2011 to 13-3 in 2012. Of course, Denver went from Tim Tebow to Peyton Manning but nonetheless, that’s quite an improvement. Critics are never far around the corner however. Remember that playoff opener at Mile High vs Baltimore? Yeah, it was a cascade of criticism raining down on Denver when they blew it 38-35 in OT. So it was Fox’s third year (2013) that they took it a step further and got to Super Bowl XLVIII (48) but once again falling, this time to Seattle in New York 43-8. This was one of the worst Super Bowls ever and the critics…….yeah, you know.

In order to build on his resume, Coach Fox will need to oversee improvement in many individual players’ performances so that the Bears can improve upon last year’s 6-10 record. If they can win 4 or 5 more games like Fox’s predecessors, you’ll see Bears fans exiting their caves to celebrate the end of a long hibernation. Here are my three players that need to emerge in 2016.

Kevin White was the Bears’ first round pick LAST year 2015, taken seventh overall. You might remember White playing, but not last year. He sat out the entire year, essentially redshirting for Chicago with a shin injury. Fans are longing for an exciting WR to cheer for in Soldier Field this Autumn and White should be the guy. There are early reports that White has been making some great exciting catches in Training Camp. Look out for #13. He has the goods to be a beast for the Bears. 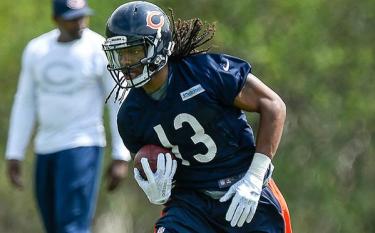 Leonard Floyd is one of these young talents oozing with talent. This guy has so much speed as a pass rusher that you wonder why his Georgia coaches didn’t just let him put his hand in the ground and rush SEC passers for the entire season. Instead, Floyd was asked to cover RB’s and TE’s in pass coverage and while he did it well, it was one of those times you wondered what they were thinking. He finished second on Georgia with 74 tackles last year while earning 4.5 sacks, 6 TFL’s, 3 PBU’s, and an impressive 15 QB hurries. There’s talk about Floyd’s body weight. He’s light at 6-4 220 pounds. Does he need to be 240 like all the “experts” say? I don’t know, but I do know he shows supreme pass rushing ability, at least in the SEC so maybe we shouldn’t worry about what a guy is “supposed” to be and just worry about his production. My plan would be to push some nutrition but not at the expense of his speed skills. If he produces as a rookie, then wonderful. If he doesn’t, then worry more about putting on the weight going into 2017. For now, unleash this talented stud!

Deon Bush was drafted out of Miami in the 4th round by the Bears in an effort to improve an area of concern for years. The Bears haven’t had a solid Safety they could count on since Mike Brown left after the 2008 season. Wo! That’s too long if you want a great defense. No wonder the Bears D is seemingly always underwhelming, at least since Lovie’s been gone. Chicago needs one of their three Safety Draft choices to emerge in 2016. If it’s not Deon Bush, then maybe it will be one of the two smaller school guys: Deiondre’ Hall from Northern Iowa, also taken in the 4th round, or DeAndre Houston-Carson from William & Mary, taken in the 6th round. On a side note, did the Bears only scout Safeties named Deon/Deiondre/DeAndre? Kinda weird!…..Kinda? Really weird!…….Really? Super weird!…… SUPER!

Bullard looks like a steal in the 3rd Round as he’s already penciled in as a starter at one Defensive End spot opposite free agent signee Akiem Hicks. Bullard was a dominant run stopper last year at Florida with 66 tackles, 11 TFL’s, 6.5 sacks, and 6 QB hurries. How did he slip to 72nd overall?!? Michael Renner at Pro Football Focus named Bullard the #1 steal of the Draft! (https://www.profootballfocus.com/draft-the-16-best-picks-in-the-2016-nfl-draft/)

In conclusion, can the Bears continue Coach Fox’s 4 or 5 win improvement in his 2nd year? From 6-10 to 10-6 or 11-5 would do wonders for Bears fans. With the development of these young studs, I think there’s a chance.