Could the Bears keep their momentum going after last week’s victory over Detroit? Yes and No. Ultimately the answer was no. The Colts beat the Bears 29-23 on Sunday in Indianapolis. Even though there were a lot of positives for a young, injured Bears team in Week 5 in Indiana, unfortunately the Bears came out on the losing end, sending them to the cellar of the NFC North Division with a 1-4 record. 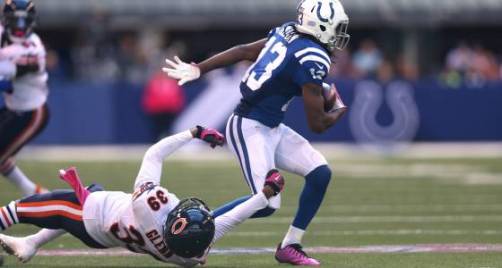 #2 Brian Hoyer – He completed 33 of 43 passes for 397 yards and 2 TD. Yet another very good to great performance by Hoyer. The only reason it wasn’t truly great was he couldn’t convert enough in the red zone. Even though Barth missed a FG, the fact remains that Hoyer only led the offense to 23 points which weren’t enough. You’d think 522 total yards would equate to more than 23 points. Nonetheless, a very good outing once again for Chicago’s “back-up” quarterback.

#24 Jordan Howard – This guy is establishing himself as Chicago’s lead back for quite possibly years. Jeremy Langford has shown flashes so let’s not show him the door quite yet but why not Howard? He had 16 carries for 118 yards along with 3 catches for 45 yards and his 1st NFL Touchdown! That is now two 100 yard games in a row for the rookie. Plus, he’s fun to watch.

#97 Willie Young – Young’s 5 tackles including 3 sacks were just what the doctor ordered for a defense that needed to hold Luck away from the Bears end zone. Unfortunately, it wasn’t enough since All World Kicker Adam Vinatieri successfully made all five FG attempts on the day. Those 5 FG’s along with 2 TD’s gave Indy the 29 points they would need for victory.

#81 Cameron Meredith – If you read my Preview, you’ll know I designated Meredith as the one player to “Keep An Eye On” this week. He did not disappoint, catching his first NFL Touchdown! In total he caught 9 passes for 130 yards including the TD and added one carry for 6 yards. However, I do hesitate to give Meredith the prestigious “Player of the Game” Award because of his 2 fumbles, including the big one with 3:29 left in the ball game that was recovered by the Colts. However, the Bears still had a chance to win this game by 1 point on the final drive of the game after holding Indianapolis to a FG with 2:28 left, making the score 29-23. We can’t overlook Meredith’s overall game. Without Meredith, who filled in for the injured Kevin White, who knows if Chicago would have even been in position to win this game at the end.

So the Bears sit at 1-4. Next week, the Jacksonville Jaguars visit Soldier Field. I think this team is better than 1-4. We’ll see if the Bears can prove me correct.