I don’t know if I’d call it “shocking the world” but I will say the Chicago Bears indeed “surprised” NFL fans by beating the Minnesota Vikings 20-10 on Monday Night Football. The Bears moved to 2-6 as they head into their midseason bye week while the Vikings dropped to 5-2 after losing two in a row.

Soldier Field was in a festive mood on Halloween as the crowd was all dressed up in crazy costumes and cheering wildly for their beloved Bears. The general mood seemed to be hopeful, with Chicago’s 1-6 record “out-of-mind” for the time being. Last week I predicted the Vikings would win 19-12 in a low scoring game in which each team would record a safety. Well, I was wrong about the safeties and the final score being in favor of Minnesota. However, I was right about some other predictions. Let’s recap what I wrote last Thursday in (http://www.footballnation.com/articles/can-the-bears-shock-the-vikings-on-monday-night-football) “Can the Bears Shock the Vikings on Monday Night Football?!?”:

Hicks is huge, and so were his stats on Halloween. He had 4 tackles, 2 sacks, and 1 pass deflection. He used his size to bull rush Vikings C #61 Joe Berger and it worked, resulting in a tight pocket for Bradford. This allowed other Bears pass rushers to crush Bradford when he had nowhere to go….but down! PS: Open Letter to Akiem……you gotta lose that sack dance…..it’s horrible! 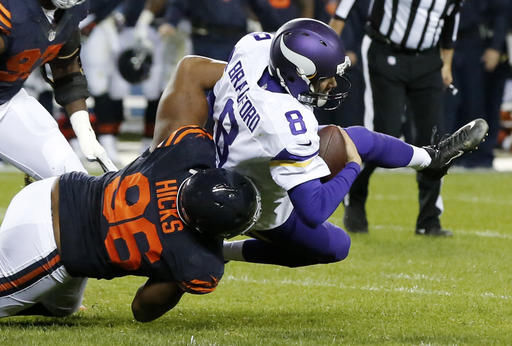 McPhee’s stats weren’t gigantic but often with Defensive Linemen they won’t be. However, his return to the lineup starting last week has re-invigorated Chicago’s pass rush. In this game, we could see McPhee making a difference right away. He had 1 sack and 4 QB hits. There’s something about McPhee. He seems to make an impact when he’s in the lineup. He did last year and he’s doing it again now. If he can stay healthy, “Katie bar the door!”

It is starting to become obvious that Floyd is going to be a star!!! This rookie shows athleticism each and every week, resulting in a fierce pass rush. He had 2 tackles and 1 sack. Not only can Floyd rush the passer but I’m sure DC Vic Fangio has fun moving Floyd around because his skills are such that he can cover receivers and even defend against the run. There was a play last night that made me smile. Floyd jumped high to bat down a pass. He missed it, but then he had the athleticism to recover and chase down the receiver, making the tackle. It was simply impressive. Watch out for Floyd! He is a beast already and will be a Pro Bowler someday with more strength and experience. 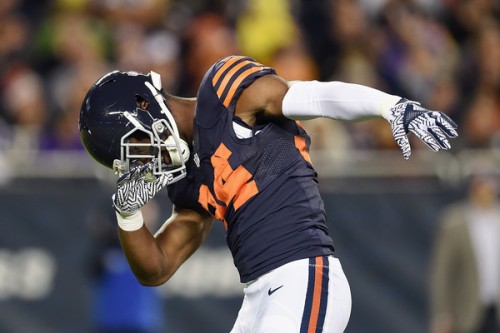 Loggains called a good game on Monday night. He seemed to do extra homework on the Vikings with the longer than normal prep time and it worked. The offense seemed to run smoother than at any time this season. You could see the difference between Cutler and the backups in his arm strength and his command of the offense. He pushed it downfield more than Hoyer did. For example, he hit Jeffery deep on the right sideline for a 34 yard gain. I don’t think Hoyer threw it 34 yards downfield all season.

Loggains, together along with Cutler’s execution, kept the #1 defense in the NFL on its heels with screen passes, downhill running plays, and even draws. Has Minnesota given up 158 rushing yards in a game this season? Not even close. Their previous high rushing yards allowed was 105 to Carolina. In fact, this is only the third time in 7 games that the Vikings have allowed 100 team rushing yards. The Bears blew this record out of the water, and they did it while missing both starting OG’s Josh Sitton and Chris Long. Surprising and crazy! Cutler even seemed to acknowledge Loggains’ play calls by giving the “thumbs up” signal toward the press box where Loggains sat.

Player of the Game:

#24 Jordan Howard – Howard rushed for 153 yards on 26 carries, both career highs. He also caught 4 passes (on 4 targets) for 49 yards. His 202 total yards are eye-opening in what has been called a Running Back position competition between Howard, #33 Jeremy Langford, and #25 Ka’Deem Carey. We can call that competition over, at least for now. 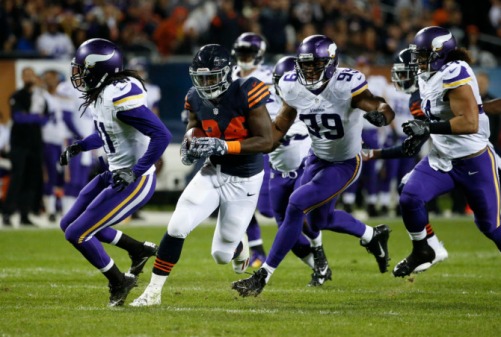 Overall, the Bears proved a lot to themselves, the fans, and even the rest of the NFL. They have not given up. Their talent level doesn’t look so bad now that a few injured starters have returned. Also, the depth provided by young players getting more experience in Coach John Fox’s system has improved the overall team psyche as well. And you can’t discount the confidence earned by having your starting QB returning and winning a big home game on national TV.

The Bears head into the midseason bye week at 2-6. It might be too late to make the playoffs, as the Bears would most likely have to win all 8 remaining games to finish at 10-6. However, the building blocks are starting to come into focus. The rest of the 2016 season should be interesting if nothing else. The next game is Sunday, November 13 at Tampa Bay. Can the Bears continue what they started on Monday night? Look for my preview of that game on Thursday, November 10.