The Chicago Bears went into Detroit for the annual “Lions and Tigers and Bears Oh My Classic” and almost pulled off the upset over the Lions. However, Detroit scored with 3:17 left to regain the lead 20-17, giving Detroit yet another comeback victory led by QB Matthew Stafford. This was Stafford’s 8th comeback in the 4th quarter this season, a new NFL record!

My biggest take from this game were the awful referees. How bad can this officiating get? It’s actually getting laughable. The CBS broadcasters Spero Dedes and Solomon Wilcots even got in on the criticism when they mentioned how this officiating crew has called more penalties than any other crew in the NFL this season. These officials lived up to their reputation as they called 11 penalties on the Bears for 139 yards (both season worsts) and 7 penalties on Detroit for 55 yards. They made terrible mistakes for both teams so you might argue that it evened out. However, Bears fans that watched the game felt hosed! Here’s a list of the referees for Sunday’s game:

Beware of this group. They take all the fun out of the game by getting “flag happy”. They call anything and everything. Here’s a detailed report card (Grade F-): 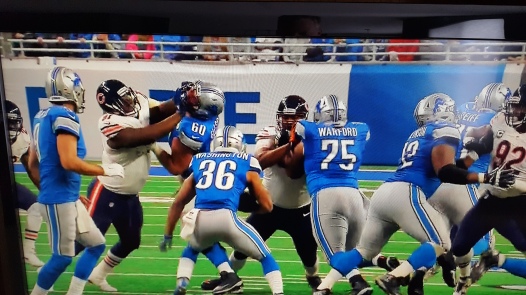 WR #81 Cameron Meredith – Meredith caught 6 balls for 72 yards and 1 TD. He continues to impress with his hands and his route running. He is becoming Barkley’s most trusted weapon in the passing game. I think Meredith has iced his future as a Bears playmaker. Whether it’s as a #1, #2, or #3 WR, the Bears have found a young player they can count on in the receivers room.

QB #12 Matt Barkley – Barkley’s 1st road start went pretty well considering his teammates made more mistakes, yet again, in Barkley’s 3rd straight start. They had more dropped passes, penalties, and missed blocks. Josh Bellamy caught 3 passes on 7 targets. I counted at least 2 more drops by him. Barkley went 20-32 with 202 yards and 1 TD. He spread the ball around to 6 different receivers on Sunday including 3 WR, 2 RB, and 1 TE.

TE #85 Daniel Brown – Brown caught 6 passes for 42 yards as he became a decent security blanket for Barkley. It seems like Barkley enjoys utilizing the TE quite a bit so if Barkley and Brown stick around in the coming years, they may develop a nice chemistry. Of course, don’t forget about #86 Zach Miller. He should have first dibs on the 2017 starting TE job. Whether it’s Miller, Brown, or someone yet to be named, look for them to become a big part of the offensive game plan if Barkley is starting.

CB #22 Cre’Von LeBlanc – LeBlanc had the big interception that he returned for the go-ahead touchdown with 7:07 left in the game. Don’t stop there however. He also recorded 4 tackles and provided decent coverage of the Lions WR’s throughout the game. Supposedly LeBlanc is so good in practice that he routinely intercepts passes yet this was his first real interception in a game. He could have a future as a solid cover man in Fangio’s scheme.

DE #96 Akiem Hicks – Hicks was excellent once again. Last week, he was our Player of the Week with 10 tackles, 2 sacks, and a forced fumble. This week at Detroit, he recorded 6 tackles and another sack. Hicks is playing at such a high level that he could garner a Pro Bowl invitation at season’s end.

Last week Kwiatkoski earned a Game Ball. This week he takes our “Player of the Game” Award. He recorded 8 total tackles, 1 sack, and several intense hits on Lions ball carriers. Kwiatkoski is simply a hard hitter. In my notebook, I tallied him with 7 “good plays”. Kwiatkoski is only a rookie, but if he keeps this up, he might not give either Danny Trevathan or Jerrell Freeman their jobs back. Of course Trevathan’s injury sounds serious enough where he won’t be 100% until after next season begins. That’s why Kwiatkoski’s development is so important for the future of this defense. It looks like he is providing key depth at worst and a possible new starting role at best going into 2017.

Result : In total, the Bears offense committed 5 penalties. There was one false start by Ted Larsen in the 1st quarter. There was one delay of game. There were 3 holding calls, one each by Josh Sitton, Charles Leno and Larsen. Barkley was only sacked once.

Prediction : “I would think the Lions will cause at least two takeaways.”

Result : I was totally wrong about this one. Bears had zero turnovers.

Prediction : “Detroit Lions 24 Chicago Bears 13. There’s just too much momentum for the 1st place Lions in a home game in which they’re seeking revenge against an old nemesis. I’ll take Detroit with the points.

I was close but if people took Detroit with the points because of me, I’m deeply sorry. The Bears played better than expected. Overall, I still believe this Bears team is better than you might think. Their 3-10 record is not indicative of how much the defense has improved since Fox and Fangio came aboard. The main reason for the horrible record is the injuries, mainly to the offense. I mean really, how many NFL teams win games with their 4th string quarterback?

My record : 7-6 (I’ve won 4 in a row. Can I keep the streak going? Read my next preview of the Bears vs Green Bay later this week to find out)