The Chicago Bears open the 2017 NFL Season by hosting the defending NFC Champion Atlanta Falcons at Soldier Field on Sunday at Noon central time. It’s gonna feel like a breath of fresh air for Bears fans to get 2016 out of their minds. They can do that on Sunday, whether they’re entering Soldier Field or just watching the game on television. Maybe they’re listening to the radio guys on WBBM AM-780 Jeff Joniak and Tom Thayer. However you like to enjoy the game, please welcome the return of professional football on NFL Kickoff Opening weekend.

The Bears aren’t the only ones left with a bitter taste in their mouths from last season. You may recall that the Falcons had a 28-3 lead in the 3rd quarter of Super Bowl 51. Talk about Heartbreak City! What will happen after that hurricane? Growth or destruction?

There has definitely been a Super Bowl hangover recently for the runners-up. In fact, two years ago the Carolina Panthers went 15-1 before losing to Denver in Super Bowl 50. Last year, the Panthers went 6-10. Wo! Will that happen to Atlanta this year? Not if Matt Ryan and Julio Jones have anything to say about it.

As for Chicago, it can’t get worse than last year’s 3-13 record. Can it? I was reading a phenomenal football resource book today called the “Football Outsiders Almanac 2017”. I bought this for the second year in a row. Taking a look at their projections using a system called “Pythagorean Wins”, they have Atlanta 3rd in the NFL with 10.9 wins. So basically they are predicting the Falcons to go 11-5 this season. Chicago’s “Pythagorean Wins” prediction is 4.7 (28th in the NFL), so basically 5-11. As you can see, this is a mismatch. Of course, I don’t think we needed any sabermetric research to come up with that conclusion. 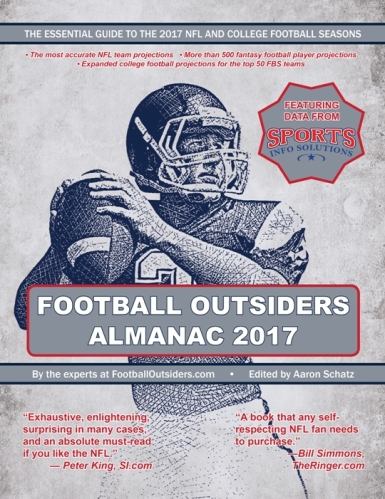 Even though I feel the Bears are much better than their preseason disrespect by all of the national and even local media, I can’t predict Chicago winning this matchup. The Bears will be better than last year, but Atlanta is an excellent team with one of the top offenses in pro football. Falcons are favored by 6 points. Take Atlanta to cover.