Sunday’s game was the worst performance of the season by the Chicago Bears (3-8) against the best team in the NFL, the Philadelphia Eagles (10-1). Let’s not waste too much time analyzing this one. A loss is a loss. Does it matter if it was by 28 points or by 3 points? Well, yeah, kinda. But who cares in this case? This was one of those games you erase from your DVR, erase from your memory, and move on. 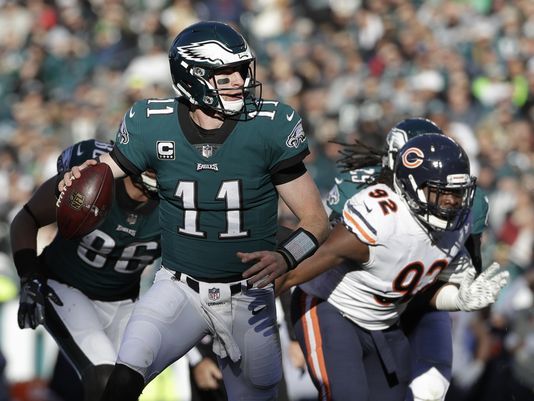 OLB #93 Sam Acho – I thought Acho played a pretty decent game in place of the injured #94 Leonard Floyd. Remember, Acho was brought back this season as the #4 OLB behind Floyd, #92 Pernell McPhee, and #97 Willie Young. Forced into action in this game, he recorded 4 tackles (2 solo) and 2 QB hits. He also incurred 2 holding penalties on Eagles OT #72 Halapoulivaati Vaitai with good speed rushes. Overall, I felt like he provided some good pressure, usually with bullrushes, on Eagles wunderkind QB #11 Carson Wentz.

DE #90 Jonathan Bullard – Bullard has shown signs of life lately. He probably needs more playing time but he’s a backup at one of the most un-injured positions on the team. He backs up #96 Akiem Hicks and #98 Mitch Unrein and both have had really solid to excellent seasons. In this game, Bullard played a bit more and recorded 3 tackles, 1 sack, and 2 QB hits. He shows promise moving forward.

CB #22 Cre’Von LeBlanc – LeBlanc played a lot in this game as one of the 3 main “starting” cornerbacks as it looks like the coaching staff has moved on from Marcus Cooper. Plus, Bryce Callahan was out with an injury. LeBlanc was one of the few Bears who played a solid game on Sunday. This performance was the kind of showing that LeBlanc had in 2016. He recorded 7 tackles (6 solo), 2 passes broken up (PBU’s), and 1 forced fumble (FF). He had good coverage more often than not against an explosive Eagles passing game. Plus, LeBlanc provided incredible effort for DC Vic Fangio.

CB #20 Prince Amukamara & S #39 Eddie Jackson – Both of these Bears DB’s played poorly. Amukamara was average because he keeps getting called for penalties, seemingly at least one every week. In this game, he had 2 penalties and we can’t blame the referees this time. Both times, Amukamara held way too long and viciously on Eagles receivers so that he wouldn’t get burned for a TD. The refs saw it and awarded Philly with 1st downs via penalty on big 3rd downs for Wentz & Co. Meanwhile, Eddie Jackson was missing tackles left and right at the Linc! He missed a tackle on WR Nelson Agholor’s quick screen pass that he took to the house. Then he was leaped over by RB LeGarrette Blount on one of his 15 carries for 97 yards. Oh brother, that’s not what you want to see from a safety filling a gap against a big back. This was the kind of play that made the Bears look foolish out there against the NFC favorites.

In our Preview last week, I pleaded/predicted/hoped for fog. In fact, I was calling the ‘Football Gods’ to bring about “Fog Bowl 2”. Check out the phrasing:

Prediction: ……….”there’s very little chance Chicago gets a win this Sunday. The Eagles are just too good. They might be the best team in the league. This might be the hardest game on the Bears schedule. Philadelphia Eagles 33 Chicago Bears 13″

Result: Philadelphia dominated as expected and predicted. You realize these guys have only lost one game all year, by 7 points at Kansas City in Week 2! That’s awesome.

Next up : The San Francisco 49ers invade Soldier Field for the 2nd consecutive year. Last year, the Bears dominated in the snow. This year? Look for our Preview later this week!