The Bears lost to Green Bay 26-10 on Thursday Night Football. It was the usual disappointing Bears game as starting QB #2 Brian Hoyer left in the 2nd quarter with what turned out to be a broken arm. At first you were hoping it was just an “owie” suffered when Clay Matthews rammed his facemask into Hoyer, thus crushing his left arm. The pressure on this 3rd down play was applied by former Bear Julius Peppers as well as Matthews. In fact, not only did Hoyer get hurt but Bears Pro Bowl RG #75 Kyle Long was also injured on the same play. Once Chicago had to insert backup QB Matt Barkley for Hoyer and #62 Ted Larsen for Long, it was all downhill from there. 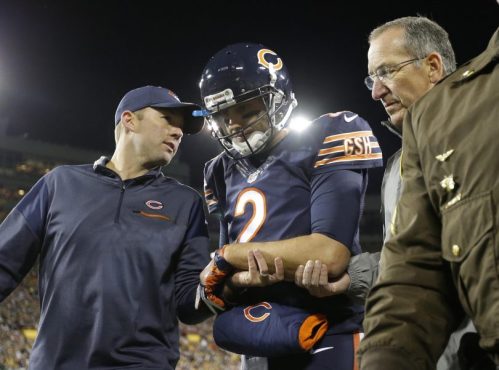 What started out as a promising performance turned into yet another loss at Green Bay, the Bears 7th in the last 9 years. The only Bears victories up in Wisconsin were in 2013 and last Thanksgiving. In this one, the Packers held the ball for twice as long as Chicago (39:36 to 20:24), ran almost twice as many plays (81-45), and more than doubled up the Bears in 1st downs (32-13). But it wasn’t all the defense’s fault. The offense couldn’t do much of anything once Hoyer left. Barkley looked like he hadn’t practiced much, and I’m sure he didn’t. “I felt prepared coming into this game, especially on paper, knowing what we were doing and X’s- and O’s-wise,” Barkley said. “But coming in (and) throwing to guys you haven’t really repped with, I think, was the biggest thing I had to get adjusted to real quick.”

Backups normally take little to no snaps in practice all week. This is commonplace around the entire league, which has never made much sense in my opinion. The most important position on the field garners no practice reps for the backup???? Why do these coaches run their teams like this? Because everybody else does it this way? That’s a bad answer. I don’t know for sure that John Fox subscribes to this philosophy so I don’t want to rip him unjustly but in general I’ve heard most NFL head coaches do not give practice reps to backup QB’s. Barkley’s post game comments seem to confirm that Fox believes in this same philosophy. Of course, in this weird week, did anyone get practice reps? Supposedly Tuesday’s “practice” was just a walk-through according to all reports. In these short weeks that the NFL loves in which they can expand their reach through yet another television deal, the players get the raw end of the deal. Normally teams give their players Tuesday off. Monday after the Sunday game, the players go into Halas Hall and get treatment for their ailments and watch game film. Tuesdays they go to the mall or go fishing. Wednesdays are the “install” the game plan days. They practice seriously and decide who is doubtful, questionable, and probable for the official injury report.

So this week with only 3 days off in between games, the Bears practiced on Tuesday and installed their game plan. On Wednesday the Bears took a bus up to Lambeau. On Thursday, they put the ailments aside and played the game. So there was little preparation time for this game. It wasn’t much easier for the Packers in that they had no healthy RB’s once Eddie Lacy got hurt on Sunday. With James Starks already sidelined, the Packers were forced to make some quick adjustments. They traded for Knile Davis and called up Don Jackson from their practice squad over the last couple of days. It turned out those guys didn’t play much (they had 2 carries each), rather the Packers decided to use WR’s Ty Montgomery and Randall Cobb out of the backfield. Montgomery had 9 carries for 60 yards while Cobb garnered 21 yards on 5 carries. Instead of running, the Packers passed the ball, a lot. Aaron Rodgers threw 56 times, completing 39 passes for 326 yards and 3 TD’s.

Meanwhile, Chicago couldn’t get much done on offense. The defense was much better but couldn’t get off the field, especially once the inexperienced Matt Barkley got in and proceeded to complete just 6 of 15 passes for 81 yards and 2 interceptions. With that kind of meager production, the Bears defense was forced to occupy the field for almost 40 minutes. You could see they were exhausted, even more so because they just played 4 days ago and traveled on a bus up North, only to be forced to cover Green Bay’s receivers on 56 pass attempts. It’s enough to make fans give ’em a break from the boos….at least for one week.

#50 Jerrell Freeman – Freeman totaled 13 tackles including 10 solo stops. He was seemingly all over the place and made an impact. One time Freeman popped a Packers receiver so hard that you expected him to get an unsportsmanlike conduct or a targeting penalty. He didn’t receive a penalty and it was indeed a big boom that ended up being one of the highlights of the night.

#22 Cre’Von LeBlanc – LeBlanc had 7 total tackles including 6 solo tackles. He got plenty of TV time as he was busy covering Packers WR’s all night. Overall he did very well. He had 2 passes defensed and 1 QB hit. The coaches rave about him in practice and he seems to have good ball skills. They say he gets interceptions in practice more than any other DB. Once he gets more experience LeBlanc has a chance to be a really good NFL player.

#25 Ka’Deem Carey – He led the Bears in rushing for the 2nd game in a row. This week he had 10 carries for 48 yards along with 1 reception for 9 yards. Carey showed a burst these last two weeks whereas starter Jordan Howard really did not. It leaves us wondering what the pecking order is with this backfield, especially once original starter Jeremy Langford returns from his ankle injury.

#94 Leonard Floyd – After missing the last couple of games with a calf injury, Leonard Floyd came to play at Green Bay! Floyd looked like a serious pass rusher on Thursday night, recording 2 sacks, forcing a fumble, then recovering that fumble in Green Bay’s end zone for a touchdown! That was an exciting play that actually gave the Bears a 10-6 lead in the 3rd quarter. Floyd and Willie Young teamed up to provide some good pressure on Aaron Rodgers at times. It wasn’t enough, but it was a start. Most importantly, Floyd “looked” like the impact player GM Ryan Pace was hoping for when he drafted him ninth overall in the Draft. More than anything and anyone else this season, Floyd gives Bears fans hope.

Next up is another fierce division rivalry game against the Minnesota Vikings on Monday Night Football on Halloween night at Soldier Field. The Vikes are the NFL’s only undefeated team at 5-0. The Bears are now down to their 3rd string QB and facing what many consider the league’s best defense. It might not be pretty but at least the Bears have time to heal up and get organized. Look for GM Ryan Pace to scour the world for available quarterbacks if he feels Barkley can’t handle the starting duties. Of course, Jay Cutler may be back for that MNF. If he’s not, it could get really scary…….for Bears fans. Now that would be a Halloween treat to savor………for Vikings fans.