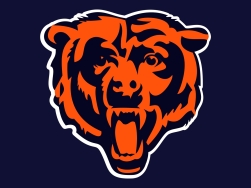 This Sunday the Chicago Bears (2-9) play an important game at Soldier Field against the San Francisco 49ers (1-10). It’s important because it could go a long way toward determining the draft order in the upcoming 2017 NFL Draft. Both Chicago and San Francisco trail the winless Cleveland Browns (0-12) in the draft order through NFL Week 12. Of course, there are still 4 or 5 games left for all these teams so a lot could change. Other teams in the mix include the New York Jets (3-8) and the Cincinnati Bengals (3-7-1). Everyone else has at least 4 wins.

Unless the Bears go on a winning spree in these last 5 games which is, shall we say….unlikely, they will probably pick somewhere in the top 5 on April 27 during the 1st round of the Draft. Could this Sunday’s game at Soldier Field end up being important? It definitely could, but can you really cheer for the Bears to lose, just because of possible draft ramifications? 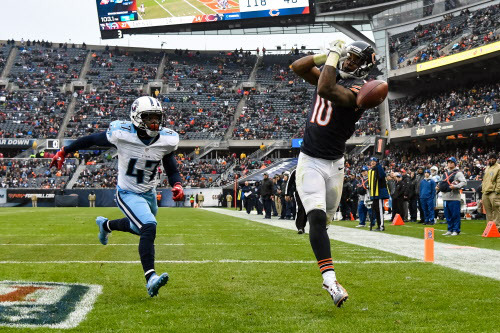 After last week’s performance which included an unfathomable 10 drops at least, can the Bears receivers hold onto QB #12 Matt Barkley’s passes? I know the top dogs #17 Alshon Jeffery, #13 Kevin White, and TE #86 Zach Miller aren’t able to play but these backups need to recognize this as their opportunity to make a name for themselves. Guys like #10 Marquess Wilson, #14 Deonte Thompson, #81 Cameron Meredith, #84 Ben Braunecker (Rookie) from Harvard (he showed flashes last week), and #85 Daniel Brown have the opportunity to step up and get recognized. They need to get noticed by GM Ryan Pace as well as by other GM’s around the NFL so that down the road they can either make Chicago’s roster or make another squad. Sure #11 Josh Bellamy dropped an easy game winning TD pass in the end zone. Don’t let that define you. Don’t let that be your lasting memory of a short professional football career. Go out there and snatch those passes. Do it for the Bears! Do it for the fans! Do it for your QB Barkley! Do it for your teammates. Do it for yourself. Find a way and just do it! (This sounds like a Nike motivational commercial). Most of all if you’re Bellamy, do it because you don’t want the fans to remember you as the image of this inept Bears era. I mean, who could forget his training camp t-shirt in Bourbonnais? I mean, the shirt was misspelled. Really? Ever heard of “”I” before “E” except after “C””? Proofread much? Spellcheck before you print? This is crying out for a “C’mon Man!” on ESPN. 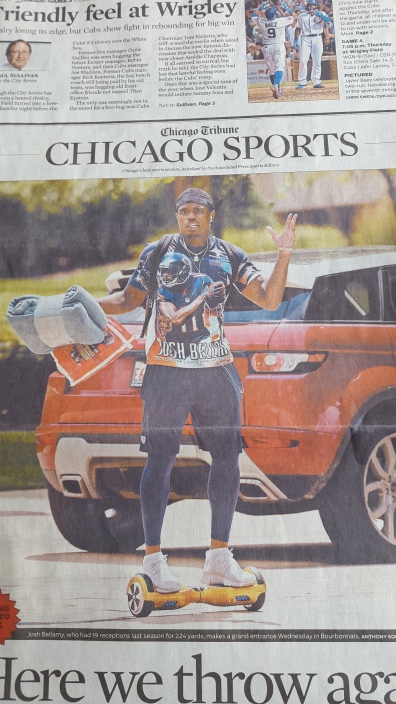 For more go here to this story in the Chicago Tribune: (http://www.chicagotribune.com/sports/football/bears/ct-josh-bellamy-shirt-training-camp-20160729-story.html)

Back to Sunday’s game, I also want to see more of #19 Eddie Royal, #26 Deon Bush, and the two ILB’s #44 Nick Kwiatkoski and #53 John Timu. These LB’s get the opportunity as replacements for #59 Danny Trevathan (bad knee injury that might keep him out until next September) and #50 Jerrell Freeman (4 game PED suspension). Can either or both of these guys show something to keep them in the conversation as future contributors? Also, will #94 Leonard Floyd be back?

It’s difficult to do but I’m projecting the Bears to win this game. As inept as Chicago has been this season, believe it or not the 49ers have been worse. They have one win, a 28-0 blowout of the Los Angeles Rams on Opening Day. They’ve lost 10 straight since then. That’s getting up there in the category of infamous streaks. It’s not quite the 1976-77 Tampa Bay Buccaneers who started their franchise with an 0-26 debut, but it’s  approaching a new level of ineptness. Ever since Jim Harbaugh left after the 2014 season, the 49ers have been a miserable brand of incompetence. In fact, even in Harbaugh’s last year they fell to 8-8 after a dominating run from 2011-’13 in which they won 13, 11, and 12 games in Harbaugh’s first 3 seasons. It all started to unravel in ’14 as QB Colin Kaepernick was unearthed as a fraud and the old players on defense started to fade into retirement. After one wasted season with Jim Tomsula as HC in 2015 (5-11) that included an overtime victory at Soldier Field (26-20 on December 6), San Francisco has turned to Chip Kelly to right the ship. However, he’s been so bad that I’m not sure even the Oregon Ducks would interview him about coming back to Eugene to “bring back the glory” in replacing his once-replacement, the departed Mark Helfrich. However, can we really blame Kelly for this 49ers mess? He was hired to fix a leaky tub but all he was given from management was a few rolls of masking tape and band-aids. Have the 49ers hit rock bottom yet?……..Soon.

In what could/should be a high scoring game with both defenses ranking below 22nd in the AER, I’ll call for Chicago to score their most points in a game this season. I know what you’re thinking……..”Really? Is he gonna pull this one again?” (I used this same prediction a few weeks ago for the Tampa Bay game and it didn’t go as planned). This time, I will call for Chicago to score at least 24 points in a home game they are favored in by one point against a 1-10 team that has the second worst defense in the league. I think the Bears receivers will earn redemption and give Barkley enough help by catching a couple touchdown passes. The ‘Niners will score too but I’ll take Chicago in a close one.