The Bears beat the 49ers 26-6 at Soldier Field on Sunday. Bears fans were thinking “Yes! Finally!….oh wait……No!!!!!” That’s the thought process of forward-thinking Bears fans as they look toward next April’s NFL Draft. Victory is great but now they most assuredly will draft below San Francisco. Oh well, that’s forgivable.

A big snowstorm in Chicago on Sunday made Soldier Field look like a snow globe. The Bears took advantage as they held 49ers starting QB Colin Kaepernick to 1 of 5 passing for 4 yards. After 3 quarters of ineptness, Coach Chip Kelly turned to backup QB Blaine Gabbert. He fared a little better, but not much. He completed 4 of 10 for 35 yards. Credit Bears DC Vic Fangio, Bears defenders, and Mother Nature.

Last week before the Titans game we labeled Kwiatkoski as our player to “Keep An Eye On”. We did watch him intently for two weeks now and he played very, very well in this game, his 2nd start. He was credited with 9 solo tackles including 2 tackles for loss (TFL). He made several eye-popping plays. He garnered 6 tallies in my notebook for what I call “good plays”. He even had 2 PBU’s on passes, one in coverage that reminded me of Bears legend Brian Urlacher. I know, right! Is #44 the new #54? Pump the brakes but nonetheless, he was impressive.

Where has Jones-Quartey been the last few weeks? He got noticed in this game right away as he tallied 3 “good plays” in my notebook. Jones-Quartey answered the call at safety, totalling 9 tackles (7 solo). In a continuous weak spot for the Bears, this safety stood out on Sunday.

Jordan Howard had yet another good game vs San Francisco. He didn’t have many flashy plays in the snow, but he was consistent. He carried the ball 32 times for 117 yards and 3 TD. It’s nice to see a young RB who can stay healthy. I’m sure Coach John Fox loves having a workhorse that he can rely on. He has earned an amazing 6 Game Balls this season (Weeks 2, 4, 5, 11, 12, and now 13) while also earning my Week 8 Player of the Game Award.

I got on Bellamy last week for his performance vs the Titans. He dropped 3 passes while catching 4 last week. This week, he dropped a couple more, but this time it was understandable due to the weather conditions. Give credit to Bellamy for his effort as he made several big receptions in this game. He caught 4 balls for 93 yards on 6 targets, earning forgiveness from both his QB and the fans. 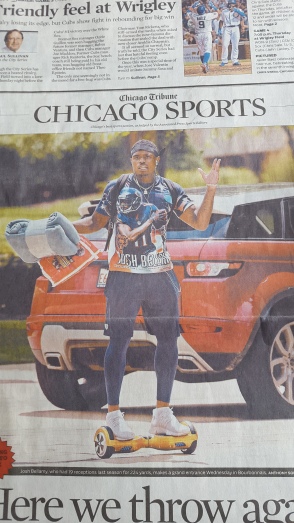 The Bears defense looked incredible on Sunday. The snow had something to do with it. But mainly we need to give credit to the performance by the players and the scheme given to them by Defensive Coordinator and guru Vic Fangio. If we haven’t done so already, we need to praise this defense installed by Fangio. In his 2nd season in Chicago, Fangio has revamped what once was a shoddy unit led by Mel Tucker (2013-14). Remember him? In what has been a major overhaul, Fangio has transformed the old 4-3 scheme into his 3-4 base defense and made in the current strength of this team. His front 7 supplied so much pressure on Sunday that Kaepernick was at a loss as to what to do. Chicago finished with 6 sacks and 2 points (on a safety),  while allowing just 10 1st downs and 6 points on 2 field goals. Fangio is sometimes unheralded but don’t forget about him. He might be the biggest reason for hope in the coming years.

Barkley didn’t play great but who could in the Soldier Field snow globe? Barkley didn’t even complete his first pass until a minute and half remained in the 1st half. But once he got that one, he started rolling! He completed three passes in a row on that 1st touchdown drive which turned the momentum in the Bears favor. He finished with 11-18 for 192 yards. He did a great job once again in running the offense in subpar conditions (weather, backups at WR and the OL). Most of all, he provided leadership as he reportedly infused confidence in Bellamy despite his continued drops. I don’t want to portray false hope here but why are we discounting Barkley as the future at Quarterback? I’m not saying he is…..but I’m not saying he isn’t either. Why not Barkley? He just turned 26 years old in September. He’s 6’2″ and he was once one of the top QB recruits in the entire country going into college. Why doesn’t he deserve a shot at Bears starting QB moving forward? Well, it looks like he does. Assuming Cutler is gone in the offseason, I can envision Barkley competing against whatever new QB GM Ryan Pace acquires whether it be through the draft or trade or free agent acquisition. Rumors abound that Pace is looking into trading draft picks to the Patriots for their backup QB Jimmy Garoppolo. Barkley and Garoppolo are very similar projects when you analyze it. Garoppolo is 25, 6’3″, he’s in his 3rd year with 2 starts under his belt. Barkley is 26, 6’2″, he’s in his 4th year with now 2 starts under his belt and 4 more starts possibly through the remainder of 2016. If Barkley continues to impress, I think he’ll earn his shot at 2017 and beyond.

Akiem Hicks is a massive human being. He’s listed at about 6’5″ 336 pounds. On Sunday he was a beast. San Francisco could not block him. He finished with 10 tackles, 2 sacks, and 1 forced fumble. I tallied AT LEAST 4 “good plays” for Hicks. I’m sure this is what GM Ryan Pace envisioned when he signed him to a 2 year deal this past Spring. Hicks is a big reason why this Bears front seven is the strength of the team. Once Leonard Floyd puts on some more muscle and gets experience, watch out!

Even though it’s hard to pick the Bears this year, the other day in my Preview I did just that. I called for a 27-24 victory for Chicago. I was right. The Bears won 26-6 in what was easily their best performance of 2016. For the 2nd time this season, I called for the Bears to put up their highest point total of the season. The Bears previous high was 23 points scored in Week 5 at Indianapolis. The first time (at Tampa) didn’t go so well. This time I was correct.

Prediction : “I will call for Chicago to score at least 24 points”.

Recap : Bears scored 26 points on 3 rushing touchdowns, a 45 yard FG by #4 Connor Barth, and a safety on a sack by future star #94 Leonard Floyd. The 26 points make me a winner!