The Chicago Bears got eaten alive in the rain forest jungle known as Tampa, Florida on Sunday afternoon. The Buccaneers swamped ’em 29-7. As a Bears fan, it sucked. Let’s get right to the point. It reminded us all of 2016. It stunk.

The Bears had 4 turnovers in the 1st half which led to 20 Bucs points, and that was really the difference in the game. Tampa led at the break 26-0. QB #8 Mike Glennon threw 2 interceptions, including one that was returned all the way for a touchdown. He lost a fumble. He wasn’t good. It wasn’t all his fault of course. The offensive line played like garbage. The receivers (what’s left of them) dropped several catchable passes. Even rookie sensation Tarik Cohen made an ill-advised attempt at fielding a punt. He fumbled it. That was essentially the game. 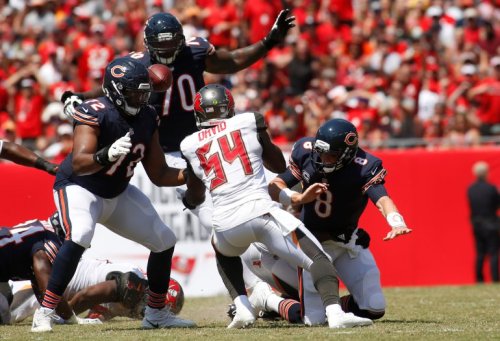 The Bears defense didn’t play very poorly considering the circumstances. They weren’t good enough though. They had several penalties and couldn’t exactly stop Buccaneers QB Jameis Winston and WR Mike Evans. Those two are quite a combo and are both becoming superstars. The Bears don’t really have any superstars yet. RB #24 Jordan Howard might be the closest thing the Bears have to a star, but he only had 9 carries for 7 yards behind a beaten up, broken blocking unit.

P #16 Pat O’Donnell – He punted 3 times for 168 total yards (56.0 yard gross average), which is excellent. His long was 63 yards. He pinned them once inside the 20 and he had one touchback. Tampa returned one punt for 17 yards. That makes O’Donnell’s net average 50.3 yards. That is tremendous. Great job!

CB #23 Kyle Fuller – Fuller had just 4 tackles but this Game Ball isn’t because of stats. It’s because he provided decent coverage and almost intercepted one or two passes. Honestly, it was the best he’s looked since the San Francisco game from his rookie year.

OLB #97 Willie Young – Chicago didn’t have a fantastic pass rush on Sunday, but Willie Young did reel in Jameis Winston once for a sack. He did his traditional sack dance which I always find enjoyable.

WR #14 Deonte Thompson – He caught 4 passes for 57 yards and the late TD from Glennon on 5 targets. Remember that Thompson probably started the year as the projected #5 receiver. The pecking order was expected to be #1 Cameron Meredith, #2 Kevin White, #3A Kendall Wright, #3B Marcus Wheaton, #5 Deonte Thompson, #6 Josh Bellamy, etc. So basically the Bears are already down to their 3rd or 4th best receiver as the lead option. Thompson and Bellamy were supposed to be mainly special teamers. We’ve only played 2 games and look at this unit. We can blame the Bears management and incompetence all we want but where does bad luck come into play? One more thing, what is GM Ryan Pace supposed to do about it at this point? The NFL is not like MLB. You can’t really go out and make a trade right now. Pace can either search for free agents or bring up somebody from the practice squad like he did with Tanner Gentry. What else can he do? And would it really help anyway? 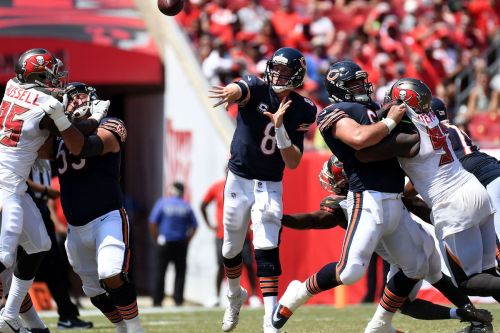 Player of the Game : FS #39 Eddie Jackson – The rookie safety led Chicago with 8 tackles including 1 TFL. At least something promising happened on the roadtrip to Tampa.

Next up for the Bears, they return home to host the Pittsburgh Steelers in Chicago at Soldier Field. Look for my Preview in a couple of days.