The Bears travel back home to Chicago after leaving that mosquito infested rainforest known as Tampa, FL. This week the Bears (0-2) host the Pittsburgh Steelers (2-0).

You may recall a great high school football movie called “All The Right Moves” (1983) starring Tom Cruise and Lea Thompson. It’s the story of an old steel town in the 1970s or early ’80s and a boy’s dream to avoid working his entire life in the coal mines and the steel factories by going off to college by earning a football scholarship. His girlfriend needs to get outta there too but the broken down curmudgeon coach Nickerson (Craig T. Nelson) has a tiff with Stefen Djordjevic (Cruise) and works hard to keep the kid from getting his dream scholarship. Anyway, it’s a great film.

I was reminded of “All The Right Moves” this week because it takes place in a small town outside of Pittsburgh in the Allegheny region of western Pennsylvania. Since the Steelers are invading Soldier Field this week, I was thinking back to that movie and all the great athletes that emerged from that area to have brilliant pro careers: Mike Ditka, Stan “The Man” Musial, Ken Griffey Sr. and Jr., Joe Namath, Jim Kelly, Dan Marino, Johnny Unitas, and Joe Montana, etc. The list goes on and on.

Meanwhile, this week the Bears need to get back on track while the Steelers are everybody’s favorite to beat the snot outta the Bears. The Steelers are favored by 7 points as of Thursday morning’s Chicago Tribune.

If the game is a repeat performance of last week’s disaster that was long over before halftime, then go ahead and pop in that old VHS tape or DVD of “All The Right Moves”. Trust me, you’ll enjoy it more than watching another hour and a half of “Bad News Bears”.

OLB #94 Leonard Floyd – Floyd has been relatively quiet so far on the stat sheet in the first two games, recording just 6 total tackles and 1 PBU but zero sacks. However, it’s not for lack of effort. He’s gotten close to both quarterbacks Matt Ryan and Jameis Winston in the first two weeks but has gone sackless so far. I’ve noticed DC Vic Fangio has him out in coverage more often than last year. He’s an amazing athlete, able to cover on pass routes, but I think this week he’ll be rushing Steelers QB Ben Roethlisberger quite often. In fact, I predict AT LEAST one sack of Big Ben. He might even record multiple sacks because Roethlisberger likes scrambling around and buying time for his receivers to get open but Big Ben isn’t the athlete he used to be. Now at age 35, he’s even hinted at retirement. After Floyd crushes him a couple of times on Sunday, he’ll wish he already turned in his retirement papers. 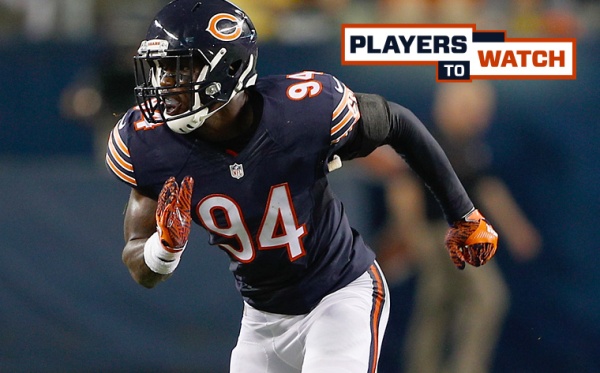 If you read my Bears Previews last season, you know I like invoking Troy Aikman’s team ratings system. It’s a much better ranking that the NFL’s simple yardage rankings. Here’s how Troy has them matching up based on data from the opening two games.

As expected, the Steelers hold the edge, but it may not be as drastic as you may have guessed. This isn’t a matchup of the best team in the league vs the worst. In fact, it makes me think the Steelers are ripe for an upset. Pittsburgh has had two easy wins over one lousy team (at Cleveland) and at home vs another team playing without their starting QB (Minnesota).

Meanwhile, the Bears have their backs against the wall. They are like an injured bear caught in a bear trap out in the wilderness. They will come out fighting! They played well last time at home vs the defending NFC Champion Falcons, barely losing. Last week, we saw how good Atlanta still is as they destroyed Green Bay. Maybe the Bears lousy performance last week at Tampa was an emotional residual effect of blowing that last second chance vs the Falcons.

Pittsburgh will take the victory for granted and show up very sluggish at Soldier Field. It’s gonna be hot out there, maybe 90 degrees at game time and the Steelers will melt from lack of intensity. The Bears lives are on the line and they will play hard and win.

I still think this Chicago Bears team is good. The injuries are killers but Chicago can and will rebound. For some reason, I believe in this team more than almost anyone and everyone else in the country. The “Dutch Lion” might be nuts, but he’s calling for an upset.