I’m dumbstruck, or maybe I’m just dumb. I didn’t see the Bears losing at Soldier Field to a 1-10 team this week. Yet that’s exactly what happened. The Chicago Bears (3-9) lost to the San Francisco 49ers (2-10) on Sunday by a score of 15-14. Former Bears star kicker Robbie Gould hit 5 FG’s in 5 tries to give the Niners all the points they would need to get a road victory over a distraught Bears squad that has their backs against the wall. To quote both former Bears HC Mike Ditka and former Colts HC Jim Mora when asked about their team’s playoff chances and status, they both replied something to the effect of, “Playoffs? I don’t know if we can win another game!” That might be the case for Bears embattled HC John Fox.

Rumors are swirling that Fox is out. The media and fans think he’ll be fired one way or the other. The media around Chicagoland is pushing it so hard that they are debating if Fox should be fired now or on Black Monday, the day after the season ends. I’m not one of those media members. Obviously this team isn’t where we want it or where we were optimistically hoping it would be. But is it really Fox’s fault? Tell me, how many NFL coaches would have a better record in Chicago with this roster and these injuries against this schedule? Think about it.

Chicago has played the hardest schedule in the league according to opponents winning percentage, up until the San Francisco game. In fact, that was the first time the Bears matched up against a team with a losing record at game time. That’s nuts!

The Bears are starting a rookie QB, a rookie 3rd down back, a rookie TE, a young inexperienced receiving corps (the worst in the league), all the while with injuries to the offensive line and receiving unit. And that’s just on offense. Seriously, how many wins would any NFL team expect with that group on offense? Maybe we should be happy with 3 wins! Don’t forget this team almost beat defending NFC Champion Atlanta in Week 1 (now 7-5), and was a field goal away from beating Minnesota (now 10-2) and Detroit (now 6-6). The Bears did manage victories against Pittsburgh (9-2), Carolina (8-4), and Baltimore (7-5).

Am I defending Coach Fox? You’re darn right I am. I’m tired of it, but I’m MORE tired of hearing everyone blame Fox for everything and assuming he will be fired. Don’t forget Fox is a 2 time Super Bowl coach that led two different franchises there. Why does the media bash Fox? Why do they try to make policy? Why do they assume things? The truth is………WE DON’T KNOW. NOBODY KNOWS EXCEPT GM RYAN PACE AND MAYBE SOME FRONT OFFICE PEOPLE LIKE GEORGE McCASKEY. VIRGINIA PROBABLY KNOWS. IS SHE PISSED? Isn’t that the REAL question here? “IS VIRGINIA PISSED????”

Enough with the ranting and the negativity. Let’s award some Game Balls!

QB #10 Mitch Trubisky – It might be hard to believe but Trubisky put up a Rating of 117.2 on Sunday. I know! He connected on 12 of 15 passes for just 102 yards and a TD. He also rushed 4 times for 19 yards. He did fumble twice but lost neither. He was sacked twice. The biggest problem in this game was the lack of plays. The Bears defense couldn’t get off the field. TOTAL PLAYS: 73-36 in favor of San Fran. TIME OF POSSESSION: 38:47-21:13 in favor of San Fran. That’s the story of the game in a nutshell. 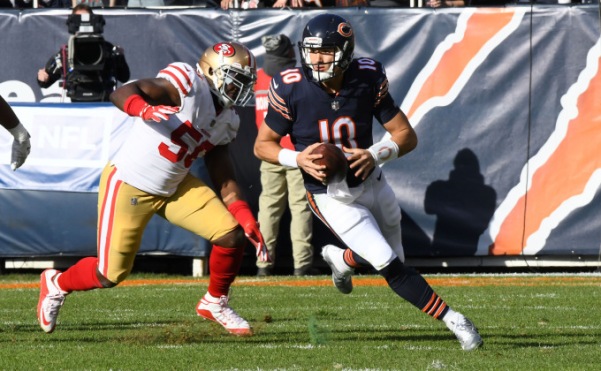 LB #52 Christian Jones – His teammates call him “Cheese” because of his big smile. Jones has really shown improvement this season. He is starting for the PED-addicted #50 Jerrell Freeman. In this game, starting next to #59 Danny Trevathan, Jones thrived! He recorded 13 tackles, 10 of which were solo. He had 2 TFL’s, 1 sack, and 1 QB hit. What does the future hold for Jones? Will he take Freeman’s starting spot going into 2018? Is he good enough to be a starter? Is he a building block? We’ll see. 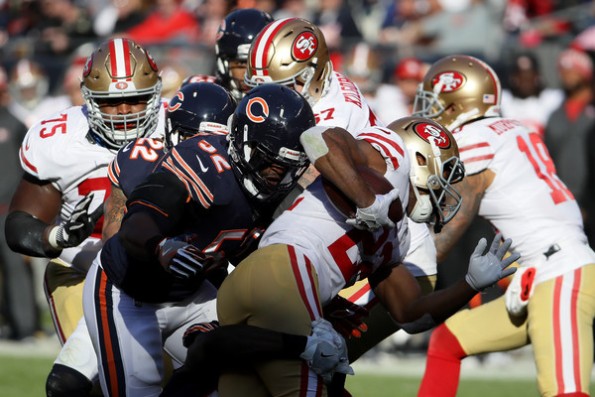 RB #29 Tarik Cohen – The “Joker Back” had one of his best games of the season. He had just 2 carries for 5 yards, but he was targeted 4 times with passes and caught all 4 for 39 yards receiving. His long play was 21 yards from scrimmage. Cohen made some sweet moves. He’s a YAC type of player! And don’t forget……Cohen took a punt to the house for a score! His 61 yard punt return for a TD made us all think the Bears were headed to victory. Sadly, it didn’t end that way. Nonetheless, Cohen provided yards, big plays, YAC, excitement, and an “almost” win. In total, Cohen touched the ball 9 times on Sunday for 114 yards. Not bad. Imagine if the Bears had weapons around him? Can you imagine Cohen on a team like New Orleans, New England, Philadelphia, or the L.A. Rams? With more open space, he would be incredible. Cohen is a future star if the Bears can build around him.

In our Preview the other day, we wrote:

“Watch for a confident, aggressive Bears team playing at home in a game they know they can and should win on Sunday……..Take the Bears to cover the points.

Next up…….the Bears travel to Cincinnati, OH to face the Bengals (5-6). Who will the “Lion” predict will win? He doesn’t know yet, and neither do I. Look for his Preview later this week. 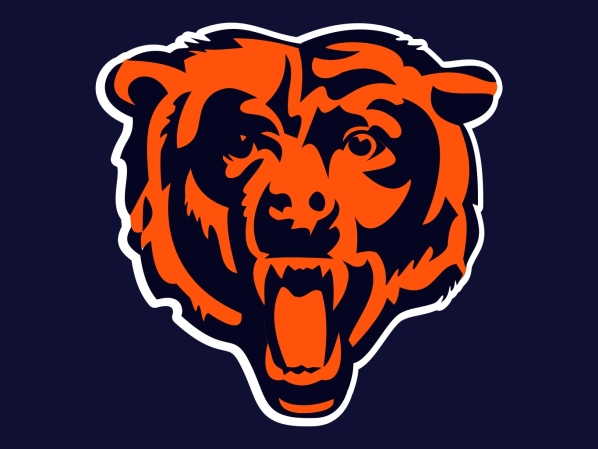