The Chicago Bears got pounded by the Washington Redskins on Christmas Eve 41-21 to close out the home schedule at Soldier Field this season. I did not expect this kind of pounding for the 3-12 Bears. This team may have finally hit the wall in what has been an awful season, mostly filled with close losses. There have been more “heartbreakers” than “backbreakers” so the blowout at home was somewhat surprising. Half of Chicago’s 12 losses have been by 6 points or less. The others have been by 9, 14, 15, 16, and 26. So this 20 point loss to 8-6-1 Washington was the second worst of the season behind only the wipeout at Tampa Bay. This pounding reminded me of how a chef tenderizes a piece of meat, such as veal, to make a fine wienerschnitzel. In fact, this pounding reminded me of the noise I heard from the kitchen at this wonderful German restaurant we had the pleasure of enjoying last week. Boom, boom, boom, boom…..the chef pounded the veal with the flat side of a meat tenderizer mallet to achieve a wonderful schnitzel that I must say I enjoyed tremendously. Meanwhile, back to Bears football…….

Washington simply dominated the game in all facets. Kirk Cousins played a good game, passing for 270 yards and 1 TD and leading the Redskins up and down the field all day. He wasn’t sacked and handed off 35 times for 208 yards and 4 rushing touchdowns. The Bears defense was lousy. They couldn’t cover anybody, they couldn’t rush the passer, they simply had a horrible day. A perfect example of how it wasn’t to be for the Bears on this day was late in the 1st quarter. Washington had a 7-0 lead and faced a 3rd and 9 on the Bears 17 yard line. Bears DC Vic Fangio called a blitz and of course it looked like the Redskins play caller was in the Bears huddle because he couldn’t have drawn up a more perfect time to call a screen pass from Cousins to RB Chris Thompson. The Bears blitzed CB Tracy Porter as well as several others. They rushed Cousins and it looked too good to be true for everyone involved. They got pressure because Washington wanted them too. Cousins dumped it over their heads and Thompson walked into the end zone to put Washington up 14-0. It was that kind of day. It was that kind of season at Soldier Field.

ILB #50 Jerrell Freeman – The other day I mentioned Freeman as our player to “Keep an Eye On”. So I did, and what I saw was decent. In his return from a 4 game suspension, Freeman recorded 9 tackles, 8 of which were solo tackles. He also had 1 tackle for loss (TFL).

RB #24 Jordan Howard – Howard earns a Game Ball pretty much every week. This is Howard’s 8th Game Ball of the season! I know…..can you say “man crush?” This time Howard carried the ball 18 times for 119 yards. He averaged 6.6 yards per carry (ypc) which is reminiscent of how he’s done it all year. His season totals are now 211 carries, 1059 yards, 6 TD, 5.0 ypc. Over the last 3 weeks, Howard has averaged at least 5.3 ypc in each game. Howard is so fun to watch too. It’s exciting to think about his future.

How good is Cam Meredith? He won our “Player of the Game Award” last week against Green Bay. Let’s make it two weeks in a row! Meredith hauled in 9 catches once again. This week he gained 135 yards and a touchdown after gaining 104 yards in last week’s game versus the Packers. Is there a better player whom the Bears learned they can count on to produce in the future? Cameron Meredith is the real deal. If you don’t see that, you probably haven’t been watching, or reading my columns, closely enough all season. 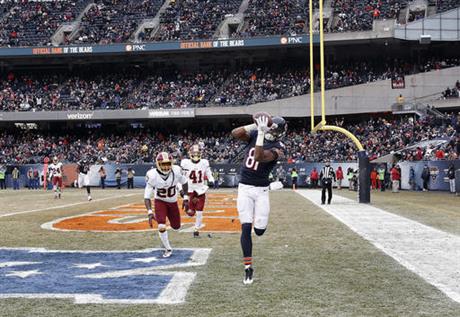 Matt Barkley clearly played his worst game in his short tenure as a Bears starting QB in this effort vs Washington. He threw 5 interceptions, many of which were his fault. He made poor decisions, once throwing an interception as he threw into triple coverage. His mistakes weren’t just mental either. One of his interceptions was simply WAY overthrown over the head of #17 Alshon Jeffery. This mistake was physical. So he had both mental and physical errors that led to 5 turnovers. On the other hand, Barkley did complete 24 of 40 pass attempts for 323 yards and 2 TD. At least he didn’t give up. Overall, I still think Barkley deserves a long look as the future quarterback of this Bears team. However, the Bears brass should most definitely draft, or trade, for another young QB in addition to Barkley. Let them compete next season and see what happens. 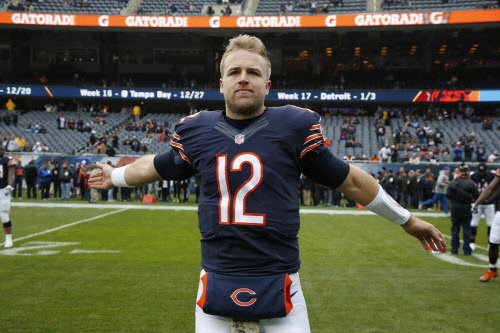 Prediction in Thursday’s Preview : “As 3 point favorites, I’ll go with ….

My Record : 9-6 (I’ve won 6 in a row after a slow start. This is getting close to that point where I buy a plane ticket to Las Vegas. Can I finish the season on a 7 game win streak? Read my next and last Preview column of the season later this week as the Bears prepare for their season finale at Minnesota on January 1, 2017.)