The Chicago Bears (6-3) dominated the Detroit Lions (3-6) on Sunday at Soldier Field by a score of 34-22. The final score was closer than the actual contest as Detroit scored two late touchdowns after the game was all but decided. Plus, Bears K #1 Cody Parkey struggled by missing 2 PAT’s and 2 FG’s. It was literally laughable when he hit not one, not two, not three, but all four misses off of an upright. You couldn’t do that if you tried. What are the odds? Good thing it didn’t matter. Add those eight points to the Bears total and the offense would have put up 42 points. Therefore, in actuality this game was more like a 42-14 blowout.

Chicago maintained their lead in the NFC North (Norris) Division and now take on Minnesota first before a Thanksgiving Day rematch at Detroit.

WR #12 Allen Robinson – Allen Robinson is so good we almost take him for granted. Sometimes that happens when fans have a player pegged in a position slot. In this case, Robinson is our “#1 receiver”. People tend to pigeonhole players and compare them to other “#1 receivers”. OK, great. Robinson might not be a premier Hall of Fame receiver like a Julio Jones, an Antonio Brown, or an A.J. Green. Who cares? For the Bears he fits. In this Detroit game, Robinson had 6 catches on 8 targets for 133 yards and 2 TD’s. What did those other guys do on Sunday? 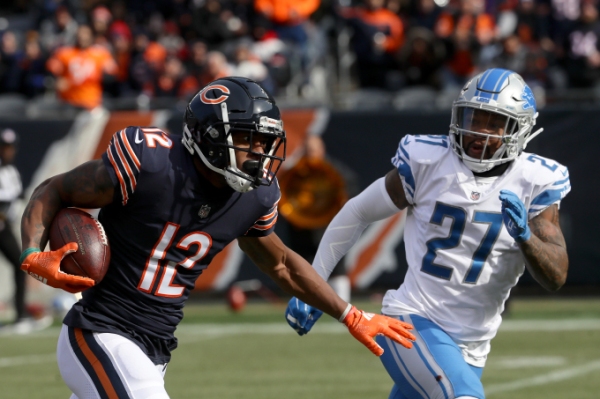 WR #17 Anthony Miller – Like his teammate Robinson, Anthony Miller had a huge game receiving. He caught 5 passes on 6 targets for 122 yards and a TD. He had a long of 55 yards. He stretched the field for Chicago and helped QB Trubisky by getting open on his well-run routes. 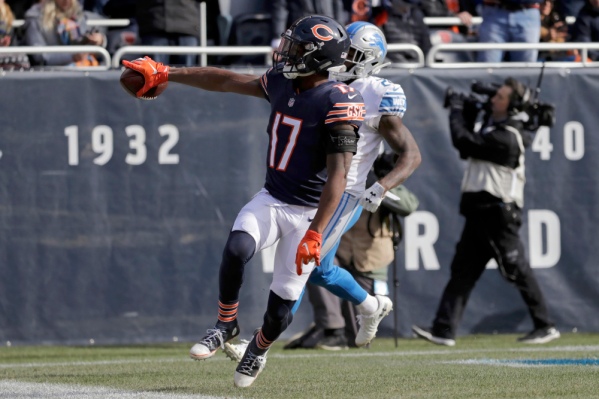 ILB #58 Roquan Smith – Roquan is quickly becoming a beast on the Bears defense. What’s scary, at least for opponents, is that he can still get much better. He’s learning the ropes fairly fast for a kid that didn’t even go through a full training camp because of his contract impasse. Is he a wunderkind? I see it. Is he a phenom? Yessir. Against the Lions, Smith led the team in tackles with a game-high 10 including 9 solo stops. He had 1 TFL, 1 Sack, 1 PBU, and 1 QB hit. Way to go Ro!

QB #10 Mitch Trubisky – An NFL quarterback can’t play much better than Mitch did on Sunday against Detroit. He completed 23 of 30 passes for 355 yards with 3 TD’s and zero interceptions. He was sacked once. He also ran 3 times for 18 yards and 1 rushing TD. His rating was 148.6 and his QBR was 95.7. Fantastic outing by our man Mitch. Tru is ready to shine and become one of the best QB’s in the NFL. Watch out!

“Watch Out For……….Return of a dominant running game

……….I expect RB #24 Jordan Howard to get rolling against a poor Lions run defense ranked 30th in the NFL allowing over 142 yards rushing per game. Look for big games from Howard and RB #29 Tarik Cohen, as well as QB #10 Mitch Trubisky with his mobile scrambling ability.

……….Also, watch for OLB #52 Khalil Mack’s return from his two game absence. Will his ankle allow him to play? Will he be healthy enough to crush Detroit’s pocket?

Chicago is favored by 6.5 points according to Wednesday’s Chicago Tribune. We will take Chicago to win S/U and ATS as well. Bears by 14.

If you thought it got real for the Bears last week, well now it gets VERY real for Chicago and their quest to win the NFC North (Norris) Division for the first time since 2010. This Sunday the Chicago Bears (6-3) look to stay in 1st Place in the Norris as they host the defending North Champions, the Minnesota Vikings (5-3-1).

Troy Aikman will help us quantify where these teams are at and how they match up with the help of his wonderful NFL team ratings system. Here’s how Mr. Aikman has the Bears and Vikings matching up based on the numbers through Week 10.

According to the AER, this is one of the games of the year! I guess this is why NBC flexed it from a noon start to Sunday Night Football so they can broadcast it nationally in primetime. Once again, Chicago has the edge in all categories: offense, defense, and overall totals. However, the Vikings are right behind the Bears in defense (1st and 2nd) and also very close overall (1st and 7th). The difference in this game lies with the offenses. Chicago’s is good/above average, ranking 10th. Minnesota’s is just ok/average/mediocre, ranking 20th.

This is an important divisional game. Divisional games are always more important because they count as essentially 2 games in the standings: what you do, what they do, and of course tiebreakers. Home-field advantage is usually paramount and this week the Bears have it.

The poor weather continues here in Chicagoland. With low temperatures (mid-20s to mid-30s) forecast for Sunday at Soldier Field, look for a defensive struggle. Not only is it what we call “Bear” weather, but these are the top two defenses in the league! Last week we called for the Bears to establish the running game. They didn’t. Maybe we were a week too early on that prediction. Let’s call for it again this week. Expect the Bears to work RB #24 Jordan Howard and RB #29 Tarik Cohen more than last week when they combined for only 36 yards on 18 carries.

Chicago is favored by 2.5 points according to Thursday’s Chicago Tribune. This week we’ll call for a Bears S/U victory but by a closer margin than the experts think. Bears win a squeaker.

We hope you enjoy the Sunday Night special at Soldier Field. Whether you’re in the stadium or watching on TV, be safe and BEAR DOWN!