The ancient vikings were a tough people. They were ruthless killers. Legend has it that one of their most devastating methods of killing was called a “blood eagle”. Nobody knows for sure if it was actually used, but it was written about in skaldic poetry, never to be proven true. Skaldic poetry is one of the two main groupings of Old Norse poetry, but you already knew that. As for blood eagle execution, it’s too gruesome to show here on Dutch Lion Sports, but if you want to know more look it up. Beware of its brutality. It is a horror show.

The Chicago Bears (7-3) took control of the NFC North (Norris) Division this week with a huge mauling of the Minnesota Vikings (5-4-1). In essence, the Bears blood eagled the Vikings on Sunday night out in the cold on the Lake Michigan lakefront. The final score was 25-20 but it wasn’t really that close. Minnesota scored two garbage touchdowns that indeed gave them a chance, but the Bears led comfortably for almost the entire match. Chicago’s defense caused 3 turnovers, sacked Vikes QB Kirk Cousins twice, and scored on an interception return. Add it all up and what does it equal? Domination!

At the beginning of the season in our Chicago Bears 2018 Season Preview, the “Dutch Lion” surprised most readers by predicting an NFC Playoff berth for the Bears with a 10-6 record. Now I’m wondering if that was too conservative. This Bears team could easily go 11-5 and win the North. Originally we had higher expectations for the Vikings, predicting them as our Super Bowl 53 Champion, but they’ve been underwhelming so far. They could get rolling again I’m sure, but for now Chicago is in the driver’s seat with a one-and-a-half game lead. The season finale will be in Minnesota so it’s important to hold onto this 1.5 game lead so that the last game is meaningless.

But for now that scenario is too far away. Let’s Award some Game Balls and look forward to the Thanksgiving rematch with Detroit.

OLB #52 Khalil Mack – Khalil Mack “Truck” is back to his old self, the way he moved prior to his ankle injury. Once again, Mack had a strip sack. In total, Khalil recorded 2 TKL’s, 2 TFL’s, 1 Sack, 2 QB hits, 1 PBU, 1 FF, and 1 FR. Mack did so much you might need to break out the abbreviations key. How great is Mack? Along with Akiem Hicks, they provide a tremendous presence. How fun is it to be DC Vic Fangio right now? Calling plays for this group must be exhilarating! 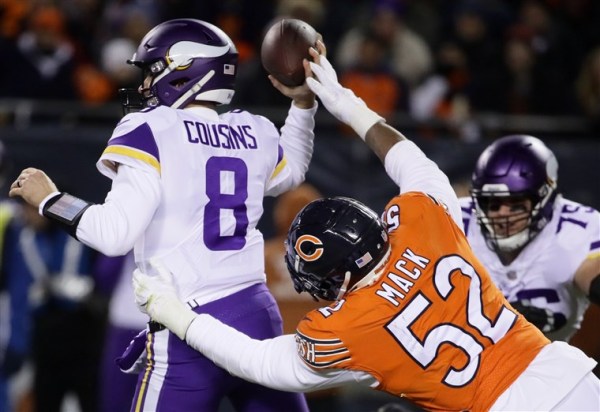 K #1 Cody Parkey – After a hectic week of insane media coverage, Cody Parkey had a “bounce-back” performance. And we don’t mean the ball “bouncing back” off of 4 uprights. We’re talking about redemption. Parkey got redemption by making all 3 of his kicks. He made 3 of 3 FG’s, from 33, 41, and 48 yards. The only question was why did HC Matt Nagy go for two 2 point conversions rather than attempting PAT kicks by Parkey? If he had confidence in Parkey, then kick the PAT’s. They were up 6-0 and 20-6 at the time of those touchdowns. If he did NOT have confidence in Parkey, then why did he send him out there for 3 field goal attempts? It doesn’t make any sense really. What if the Bears missed those 2 point conversions? Chicagoans would have been furious with Coach Nagy. Luckily for him the players picked up for his mistakes.

DE #96 Akiem Hicks – A mountain of a man, Akiem Hicks wreaks havoc on his opponents. Remember that these opponents all weigh over 300 pounds. And Hicks simply dominates them into submission. Hicks recorded 6 tackles, 5 TFL’s!, 2 QB hits, and 1 Sack on Sunday night. 5 tackles for loss! Those are crazy numbers. His play helped the entire defense and he was the biggest reason for the Bears defense’s dominance over Minnesota. That’s why he gets our Player of the Game.

The poor weather continues here in Chicagoland. With low temperatures (mid-20s to mid-30s) forecast for Sunday at Soldier Field, look for a defensive struggle. Not only is it what we call “Bear” weather, but these are the top two defenses in the league! Last week we called for the Bears to establish the running game. They didn’t. Maybe we were a week too early on that prediction. Let’s call for it again this week. Expect the Bears to work RB #24 Jordan Howard and RB #29 Tarik Cohen more than last week when they combined for only 36 yards on 18 carries.

Chicago is favored by 2.5 points according to Thursday’s Chicago Tribune. This week we’ll call for a Bears S/U victory but by a closer margin than the experts think. Bears win a squeaker.

Much has been made of the NFL’s decision, along with NBC Sports, to “flex” last Sunday’s Minnesota game at noon on Fox to the primetime game on NBC on Sunday Night. The problem with that decision was it made this week’s game against Detroit the quickest turnaround time in NFL history. I read in the Chicago Tribune recently that from the time of the final whistle on Sunday night until the opening kickoff on Thursday morning would be only about 85 hours. That’s not good, and not really fair. I fear that the Bears will pay for the NFL’s incompetence.

On Thanksgiving Day the Chicago Bears (7-3) will kickoff against the Detroit Lions (4-6) at 11:30 am right after the Macy’s Thanksgiving Day Parade. The game is on CBS. The latest rumor has it that Bears phenom QB #10 Mitch Trubisky will not play. Therefore, backup QB #4 Chase Daniel will likely start under center. That means the Bears will need another gargantuan effort from the defense in order to have a chance in this ballgame.

All the numbers point to Chicago. However, several intangibles point towards an upset.

Chicago is favored by 4 points according to Wednesday’s Chicago Tribune. Unfortunately I see a letdown for the Bears this week. I’m calling for a Detroit Lions upset which is sad because we all know Chicago has a much better team. But one game does not make a season.

Despite the possible somber outcome, we hope you enjoy the Thanksgiving holiday. Have fun out there with your family and friends! Happy Thanksgiving!