Music City Bowl : Kentucky Wildcats (+7.5) over Northwestern Wildcats – “The Gut” has been ripping on Northwestern (9-3) all season. Why stop now? They’re not that good. They’re more like 6-3-3 ‘good’ with an easy schedule (3 wins were from OT’s, which are really glorified old-school ties). This game reeks of SEC dominance down in the Deep South city of Nashville, TN. Gary says “Pick Wildcats, the Kentucky fried version, especially as they’re getting 7 points PLUS the hook.” RESULT: Northwestern squeaked out a S/U victory by one point, 24-23. WIN!

Orange Bowl : Miami Hurricanes (+5.5) over Wisconsin Badgers – RESULT: Wisconsin covered as they won by 10 points (34-24) with a surprisingly good performance by Alex Hornibrook. He threw for 4 TD and zero interceptions. That was just the 4th time in 14 games this season that Horni didn’t throw a pick. LOSS.

Peach Bowl : UCF Knights (+9.5) over Auburn Tigers – Head Coach Scott Frost was just named AP Coach of the Year. Congratulations! He gets one last chance with UCF before heading off to Nebraska. His Knights are 12-0 and looking for a perfect season. Auburn is 10-3 and probably overconfident. The pregame trash talk has already begun and you wonder how this will play out. Gary says PICK UCF and enjoy all those points. RESULT: In one of the most satisfying Bowl games this season, UCF and Coach Frost and his staff backed up the talk and beat Auburn S/U 34-27!!! WIN!

Rose Bowl (CFP Semifinal) : Georgia Bulldogs (-2) over Oklahoma Sooners – RESULT: In the greatest Bowl game of this season, Georgia came back from a 17 point deficit and got the game to OT. In the 2nd Overtime, Sony “Playstation” Michel won the game with a wildcat QB rushing TD to end it. Georgia won 54-48!!! WIN!

Sugar Bowl (CFP Semifinal) : Alabama Crimson Tide (-3) over Clemson Tigers – “The Gut” has a gut feeling. His gut tells us to PICK ‘BAMA. RESULT: Alabama rolled to an easy victory in a really boring game. ‘Bama won by 18 points, 24-6. WIN!

* My brother-in-law Jay submitted his Bowl Picks and finished 13-12-1. Nice work for an amateur! *

National Championship: Georgia Bulldogs (+3.5) over Alabama Crimson Tide – Both the “Dutch Lion” and Gary “The Gut” Goombah have Georgia not only covering this spread but winning straight up. That’s right! This ‘Bama is NOT a vintage ‘Bama team. Georgia, meanwhile, is excellent. Look at all these superstars: Nick Chubb, Sony Michel, Roquan Smith, Trent Thompson, Lorenzo Carter, Davin Bellamy, Terry Godwin, Jake Fromm, Javon Wims, D’Andre Swift, Mecole Hardman, Rodrigo Blankenship, Jonathan Ledbetter, Tyler Clark, John Atkins, Domanick Sanders, D’Andre Walker, J.R. Reed…..the list goes on and on. This roster is amazing. This is their year. You read it way back in the preseason in the “Dutch Lion’s” College Football Spectacular. I just reread my column (posted September 1) and I believe it might be my greatest work ever. I beg you to check it out. Sure there were some clunker predictions but wow is it fun to see what went right and what went wrong. Here’s a quick sample:

So that’s it for Gary “The Gut” Goombah’s college football selections for this season. 47-41-4 ain’t bad, but he really wants win #48. Go Dawgs! Go UGA! And don’t forget what the “Dutch Lion” advised in September: 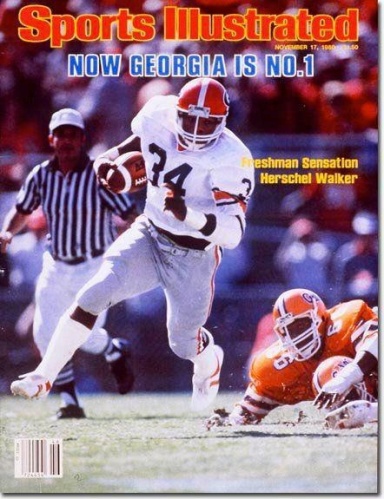