Wow! That was the performance we were all waiting for…..not just from Mitch Trubisky since he arrived last year, but the performance we’ve all been waiting for since……the 2006 Super Bowl season? 48-10? What! Super Soph QB Trubisky threw 6 TD passes!!!!!! (note the 6 exclamation points) This Bears team is on a roll. They’re finally doing something with all the talent GM Ryan Pace has accumulated over the years. It’s all coming together. Taking advantage of a week early season schedule, the Bears are rolling in 1st Place in the NFC Norris (North) Division.

RB #29 Tarik Cohen – Cohen had his first ever NFL game as the feature back. He was used more in this game than in any other game so far under Coach Matt Nagy. He had 13 carries for 53 yards. He caught 7 passes for 121 yards and a score. That’s a total of 20 touches for 174 yards and 1 TD. These are gigantic stats to not be named Player of the Game. But in this 48 point scoring barrage, we all know who will be receiving that Award. 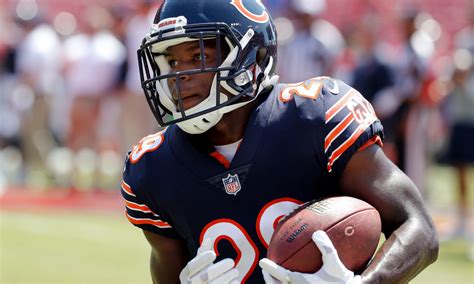 WR #18 Taylor Gabriel – Gabriel caught 7 balls on 7 targets for 104 yards and 2 TD’s. He also had a 10 yard carry. Solid game for Gabriel as one of Trubisky’s main weapons. 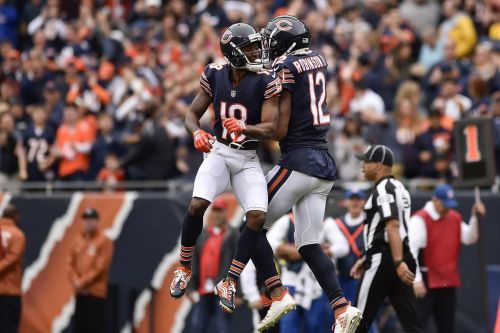 DT #98 Bilal Nichols – Sure we could’ve awarded yet another Game Ball to superstar OLB #52 Khalil Mack, but we’re watching the rest of the team to see who steps up and you know who we discovered the past couple of games? Bilal Nichols! We’re getting pumped about Nichols potential. As a 5th round rookie defensive linemen from a small school (Delaware), we’re excited about GM Ryan Pace’s latest out-of-nowhere find. In this game, Nichols posted 4 tackles, 2 stuffs, and half a sack. You might recall he had a big TFL in the previous game at Arizona. Let’s throw a Game Ball at Bilal. He probably won’t catch it though….he’ll just knock it down. That’s what D-Linemen do. 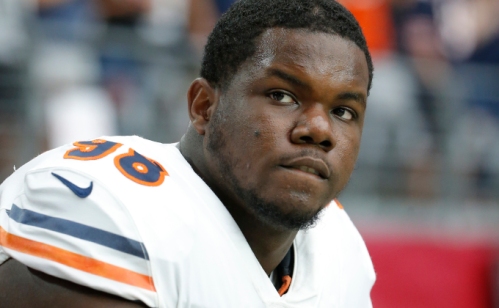 QB #10 Mitch Trubisky – No Chicago Bears quarterback has put up the number of touchdown passes that Mitch put up on Sunday since December 11, 1949 when Johnny Lujack threw 6 TD passes against Chicago…..the Chicago Cardinals, at Wrigley Field. The Bears dominated the Cardinals that day 52-21, who called Comiskey Park their home when they were a Southside team from 1920-’59. Remember when Chicago had two pro football teams? Me neither. This Bears/Cards game was so hard to believe. It was one of those magical days for Mitch, for the Bears, for Chicago. We’ll probably never see 6 TD passes again. If we do….that’s gonna be even more unbelievable because once is special, twice is a trend.

“Watch for Chicago to make Fitz look like the journeyman he has been for most of his career……With help from the pass rush, I think they can. Safeties #39 Eddie Jackson and #38 Adrian Amos will make some big plays to help the Bears shut down the Bucs passing game…….Chicago is favored by 3 points according to Saturday’s Chicago Tribune. Once again, “Dutch” will take Chicago both S/U and ATS!

So now the Chicago Bears (3-1) head to Miami to face the Dolphins (3-2) in Hard Rock Stadium at Noon on Sunday. Chicago is favored by 3.5 points as of Saturday’s Tribune. Can the NFC North leaders extend their lead? Will Miami stay undefeated at home, where they are 2-0 after beating Tennessee and Oakland in Weeks 1 and 3? Those wins helped lead the Dolphins to an undefeated 3-0 record before they fell the last two weeks at New England and at Cincinnati. Maybe the home-cooking is what they need? Maybe they just aren’t very good? They’ve only scored 99 points while allowing 117 so far this year. Meanwhile, Chicago has scored 111 and given up only 65 points through their first four games.

QB Ryan Tannehill leads Miami with 972 yards, 66 comp %, 8 TD, and 5 INTs. At RB, the Dolphins use Frank Gore and Kenyan Drake. At WR, Miami utilizes Kenny Stills, Danny Amendola, Albert Wilson, Jakeem Grant, and DeVante Parker. On the defensive side, the Dolphins are led by LB Kiko Alonso who already has an amazing 50 tackles, 2 FF’s, 2 INT’s, and 3 PBU’s. Those are big numbers through 5 games. Watch for him on Sunday.

Meanwhile, the Bears are rolling. What can we say that you don’t already know? This team is playing well, doing all the right things so far. Outside of blowing that opening night lead at Green Bay, this team has rocked and rolled. Will the bye week hurt Chicago’s momentum? Will Trubisky throw 6 more TD passes? Will Jordan Howard return as the lead RB, or will HC Matt Nagy go with Tarik Cohen once again? If so, can Cohen hold up if he gets 20 touches per week? All interesting questions to consider while watching this Bears game.

Let’s further analyze this game with the help of Troy Aikman and his wonderful NFL team ratings system. It’s a much better ranking that the NFL’s simple yardage rankings. Here’s how Mr. Aikman has the Bears and Dolphins matching up based on the numbers through Week 5.

As you can see, Chicago has the dominant edge in this matchup. I’ve been looking at the AER for the last 3 years now and I can’t remember the Bears ever being close to the top much less #1. It’s a big day for Chicago! The Bears have the #1 defense, the #12 offense, and the #1 overall team in the NFL according to AER. Sweet action.

Chicago is favored by 3.5 points. “Dutch” will definitely take Chicago both S/U and ATS once again this week.

Enjoy the game. Oh, and by the way, after the game go visit Grams & Gramps, bring them a bag of Werther’s, and have a nice meal from Grandma, especially if you can enjoy it in their condo in Del Boca Vista, Florida! See you next week folks!